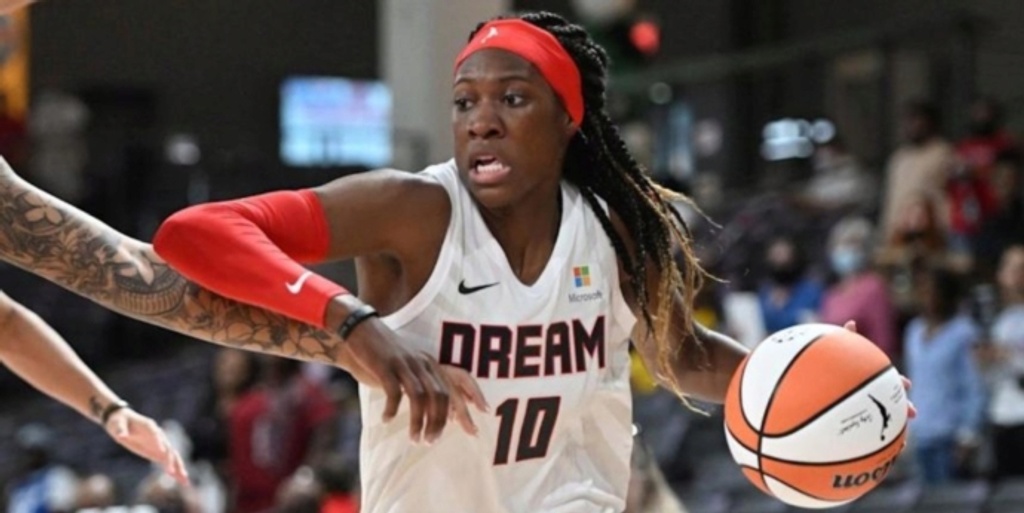 I needed to see Rhyne Howard in person.

Sure, it had only been two games, but Howard's start to her WNBA career wasn't normal. She slapped up 16 points in her debut against the Dallas Wings. That was followed by 21-point outing against the Los Angeles Sparks. Those were two wins for the Dream that I'm not sure many outside of the locker room expected them to snag.

Beyond the scoring totals, I was impressed by her level of comfort. The efficiency wasn't quite there, particularly inside the arc: she missed nine of her 11 two-point attempts in those games. But, and excuse me for not sounding profound here, she mostly just missed. You'd expect rookies to really struggle with the improved speed and physicality of the WNBA. To get knocked off their spots. To struggle to even get to their spots.

Look at some of these misses and tell me if Howard looks flustered.

So, yeah, I needed to see Howard.

The Las Vegas Aces were in town, fresh off their first loss of the season, an 89-76 loss to the Washington Mystics fostered by a 53-27 beatdown in the second half. An Aces team with the blend of athleticism and length they have? An angry Aces team off that loss with two days off?

There's a cliche in sports about teams or players getting hit in the mouth and their mettle being measured by how they respond to it. This seemed to be the perfect test for Howard. I wanted to see how she'd handle that moment against a title contender if it arrived.

I wasn't expecting to see a literal example.

Midway through the third quarter, Aces guard Chelsea Gray took and missed a contested pull-up middy. In the midst of battling for the rebound, Howard took an accidental elbow from Aces forward Dearica Hamby. But watch how this possession plays out.

That is Howard literally getting hit in the mouth, holding her mouth, blocking Hamby with her free hand, then getting the rebound with that same hand before checking out of the game. If that's her response to getting hit, figuratively and literally, the rest of the WNBA has a problem on their hands.

The Dream took their first loss on Friday, with the Aces coming out on top 96-73. Howard ended her night with a modest stat line--13 points on 4-of-10 shooting, four rebounds, two assists, and that block in a season-low 25 minutes--but the flashes were there.

Excluding end-of-clock heaves, all but one of Howard's three-point attempts came off the catch in her first two games. If it wasn't a stationary catch-and-shoot jumper. Rather, it was one where she fired coming off some sort of movement. She's shown comfort flying off a variety of screens or relocating around the arc while her drivers do work.

At 6-foot-2 with a high release point, contests don't bother her. Her fearlessness as a shooter already stands out. It's why she's able to shoot as well (45.8% from deep) and as often (eight attempts per game) as she does.

Against the Aces, we got to see her tap into her creation bag. She took a pair of threes, draining both of them. But the looks were key. On her first attempt, she called for a high ball screen, stared down A'ja Wilson in drop coverage and pulled up with no hesitation. Her second attempt was a clear-out against Hamby. The ease in which she pulls up in her face is chuckle-inducing.

She's been trusted with pick-and-roll reps already. Her size allows her to see over smaller defenders and the threat of her jumper calls for tighter coverage. Her handle isn't point guard-tight, and that shows with the lack of live-dribble reads she has on film right now. She's much more likely to pick up her dribble and make the easy kick if an immediate advantage isn't there.

Considering the scoring gravity she already has, that's honestly okay. Even with the handle limitations, she's flashed some eye manipulation. She also got audacious with this feed on Friday.

Remember the drop coverage she saw earlier in the second quarter? The Aces decided to ramp up the pressure there. Wilson hedges, hoping to cut off a driving angle. Howard does not succumb to the heat and counters with a nasty wrap-around. It's impressive stuff.

There was also this, which... what the heck?

Howard isn't the perfect player. Again, the handle will need to tighten, particularly in close quarters. The Sparks bothered her a bit in the second half of their game by placing Jordin Canada on her. It'll be interesting to track how Howard deals with smaller players crowding her dribble. We know she doesn't mind shooting over them, but you don't want her to bail out opponents with early jumpers either.

As the handle tightens, she'll likely have more success getting to the free throw line. She posted a 20.4 free throw rate in her senior year at Kentucky, a mark that ranked in the 79th percentile of college players per the good folks at Her Hoop Stats. She's taken 10 free throws in three games to this point, and she took three of those on Friday as a result of a bad Hamby close-out on a three-pointer..

If there's a place where the speed and physicality gap of the W bothers Howard, it's on the non-glamour end of the floor. Screen navigation is a real issue for her right now. More specifically, keeping her head on a swivel while also being prepared to navigate screens is the issue.

I'm intrigued with the defensive potential, though. I'm no coach, of course, but I'd much rather see issues with navigation than issues with engagement. Howard gives effort. Even when she's hung up on screens, you'll see her attempting to scurry back into the action.

If Howard is able to improve her awareness, I think her physical tools are going to shine through pretty consistently. She has the length and toughness to defend forwards and doesn't look out of place sliding with guards.

She's trying to navigate the minute stuff on the fly, and she has still managed to rack up 6 blocks and 3 steals through her first three games.

This is the good stuff.

The Dream were a bit of a mess last season, on and off the floor. We'll be nice today and leave it there. But it's hard to think of a better "phoenix rising from the ashes" outcome than landing Howard in this year's draft. She has the look of a special offensive player already, with a strong enough baseline defensively to believe she can develop into a two-way force.