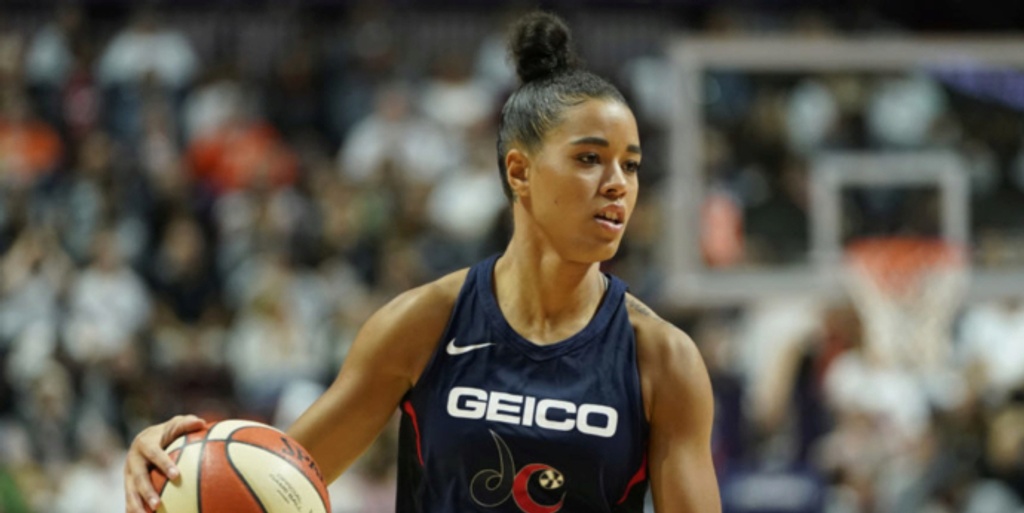 Natasha Cloud is a shooter, and the WNBA is on notice now

After a 78-66 victory over the Minnesota Lynx that never really felt as close as the score might indicate, the Washington Mystics are now 2-0 to start the season. With Elena Delle Donne out for scheduled rest, Tianna Hawkins out due to personal reasons and Alysha Clark (who hasn't yet made her season debut) out due to a foot injury, we got a glimpse of the depth on this Washington roster.

Mystics rookie Shakira Austin impressed with a double-double in her first career start, really performing well on the defensive end. Ariel Atkins dropped a game high 20 points along with 5 assists, including a smattering of trips to the free throw line off her drives.

The story, though, was Natasha Cloud.

Cloud is one of the best defensive guards in the WNBA. She's a phenomenal driver and has a great feel for the game. Her ability to cut up defenses with her rim attacks and court vision in tandem is vital for kick-starting Washington's offense.

Her shot from deep has been inconsistent since a career year from beyond the arc in 2019 (38.6% on 3.1 attempts per game), limiting her impact as an off-ball player. She's a good cutter and relocates well in an offense, but constant unders on ball-screens and being helped off when spaced could muck up the paint.

Things are changing in 2022. This is a different offensive version of Cloud.

👀 “I’M A SHOOTER!” Natasha Cloud @T_Cloud4 grabbed my mic (😂) and put the whole league on notice during our end 1st quarter interview!! She went on to lead the @WashMystics over the Lynx w/ 19pts, 6a & 6r in Minnesota! #WNBATipoff 🏀🔥🏀🔥 pic.twitter.com/clB9tLNB6a

Cloud took 95 threes in 27 games last season, hitting just 26 of them. She's already taken 11 in two games this season, spurred on by her 4-of-7 outburst from deep last night. Even in Washington's first game against the Indiana Fever, her lack of hesitation at the three-point line and comfortability getting into her shot outside the arc was noteworthy.

Athletes Unlimited in late winter provided us a forecast of who Cloud might be in The W this season. She operated as a primary option, honed her aggression as a scorer and most notably went 34 of 84 (40.5%) from deep in 12 games.

Cloud did not lie during that interview, and she hasn't lied once when yelling out, "I'm a shooter."

For her first shot of the game, Cloud kicks the offense into gear with an early-offense, empty-corner high pick-and-roll with Myisha Hines-Allen.

The defense collapses on Hines-Allen's role, and she kicks the ball back to Cloud, who is spaced at the top of the key. A miss, but no hesitation and good process. The defense is still sagged off, and it's a pretty sluggish closeout. (Also, shout-out to Austin for the impromptu screen!)

Cloud's second shot of the game was her bread and butter with a heaping spoonful of seasoning.

Running the screens that high for Cloud really opens up the floor, and she's able to get a step-and-a-half on the reigning Defensive Player of the Year, Sylvia Fowles. Cloud's contortion to avoid Jessica Shepard's rotation is wildly impressive.

The Lynx show on the drive with Natalie Achonwa in for Fowles at the 5, and Cloud shows off her playmaking. Shatori Walker-Kimbrough misses the shot, but this is a fantastic read-and-skip.

Rui Machida, who I am very excited about, enters the game and shifts Cloud more off the ball in the half-court.

Shepard rotates low. Rachel Banham, Cloud's defender, sinks to take away the open Shawndre' Jones in the dunker spot. Cloud lifts into the slot to make herself more available to Machida, but also a farther closeout path for Banham. CASH.

In past years, that's a defense you can get away with on Cloud. But if the past few months are any indication, defending weak side with Cloud in the corner or slot is going to be a headache.

Ok, it's been a game and five minutes, are we overreacting?

I had this thought Sunday night right before Cloud took this shot.

A pull-up three going to her left?? Ok Tasha!!!

I'd understand calling this a "bad shot," and it not falling lends credence to that line of thinking, I suppose.

However, to really force defenses to adjust coverage to you as a shooter.... you have to shoot! Confidence and volume is essential to actually make a defense care.

With how many players were missing in this game and the surrounding context, I did a double-take with a grin watching this shot. This is the shot of someone who actually believes they're a shooter, and that's 90% of the battle.

Cloud puts together a multitude of her skills here on her next attempt.

Drive, collapse the paint, kick to the open player and relocate in the flow. The Lynx defense breaks down after she initially bends it, and then she punishes them for letting her get away scot-free at the line. This is the equivalent of finding a crumpled 20-dollar bill in your pocket.

Slip on the breakaway, no matter, "I'm a shooter!"

Finally, the Lynx have decided to shift things up. Cloud running pick-and-roll is devastating their defense right now.

Fowles comes up to the level and switches onto Cloud as she drives to her right off the screen, and she hits THIS.

Cloud finished with 19 points in the first half, her total for the night. Her impact didn't stop there!

Look at how much attention she garners out of this high screen in the mid-third, indicative of how Minnesota approached her pick on-ball reps the rest of the night.

Even with her drive halted, she quick-flips the ball to Austin to punish the bent defense off the catch, something she did well all night.

Cloud finally started drawing hard closeouts in the second half and attacked off the catch, hitting her pull-up inside the arc or knifing to the rim. She pushed the pace off misses, and was dynamic as a kick-ahead passer. Washington's half-court offense was good last night, but pushing in transition was vital to blowing open its lead while missing its most important half-court scorer.

Natasha Cloud is a shooter folks. She's confident, she's aggressive and she's a different offensive player in 2022. Things are getting interesting in D.C. as the early season unfolds, and Cloud is a significant part of that.

If you hadn't taken notice before, now would be a good time!