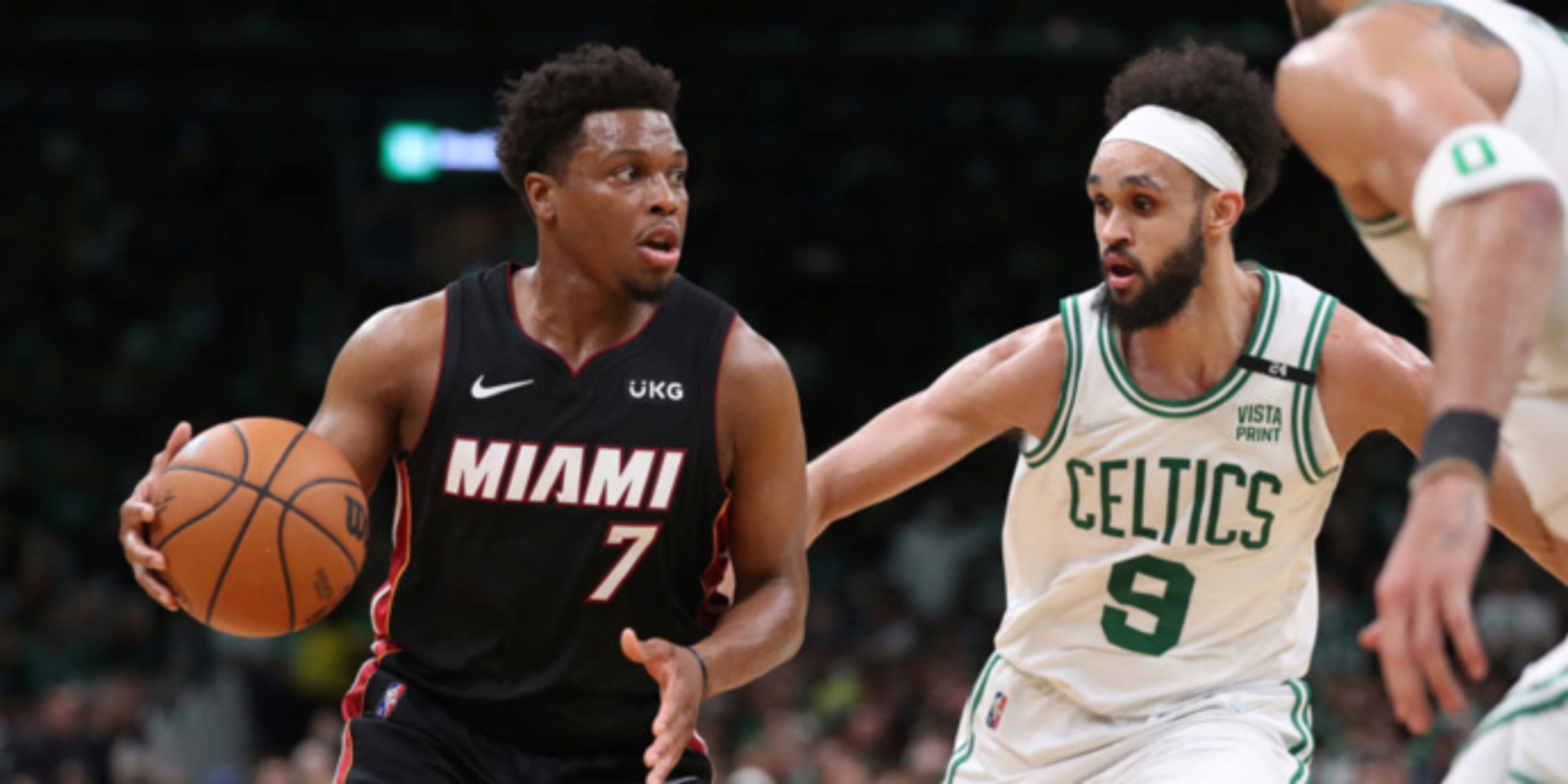 Derrick White: Eliminating release valves and shutting off the water

What happens is the crux of any conversation. Results spur on ideology and conjecture. Wins, losses, box scores and stat lines invite slander and celebration.

Results are important for measuring goals, gauging success and resetting priorities or strategies. Why those results occur is what I find fascinating.

The 2022 Eastern Conference Finals between the Miami Heat and Boston Celtics have been difficult to parse through, akin to a redux of the 2004 series between the Detroit Pistons and Indiana Pacers. Only four of the players who played 10 minutes per game or more in that series shot 40% or better from the floor.

A series defined by restrained offense and amplified defense is rooted in the why. Yes, both the Heat and Celtics have exchanged slogging moments. Turnovers have been in abundance. There have been many free throws, as the physicality is ratcheted up to the 10th degree.

The Heat’s offense is predicated on movement, screening, handoffs and maximizing their pressure points through shooting gravity to open up looks with their collective passing and intuitive play. Miami was 14th in the league in three-point attempts per game, but first in three-point percentage (37.9%). What made them more impressive was how those shots got off.

The Heat are chock-full of movement shooters with Max Strus, Duncan Robinson, Tyler Herro, Gabe Vincent and Kyle Lowry all capable of hitting shots off of a variety of movements and even self-created with their handles to varying degrees. Miami shot 42.9% from deep in Game 6, a far cry from the 29.2% (52/178) over the previous five games. Jimmy Butler hit four shots from distance after only hitting two all series. Tough shots fell in volume.

To equate Miami’s victory and invigorated offense strictly to shot variance would be unfair. Miami has thrived on those tough threes off movement or pull-ups all season, but they haven’t hit the same. It’s difficult to project another game like last night for Miami’s shot-making, although one game throws sample size to the wind. Again, the why is so crucial here.

Miami’s offense has been stuck in the mud much of the series as our own Nekias Duncan recently wrote. Boston’s bigs have stifled the Heat in the paint and through their ability to toggle between the paint and perimeter. Stopping shots at the second and third level has been a large reason for Boston’s defensive success. Miami,  27th in rim frequency during the regular season per Cleaning the Glass, is dependent on their ability to attack the gaps created by their shooting gravity.

They’ve been constricted by their own shot profile at times this series, but mainly due to how Boston has been able shut off the release valves. Most of Miami’s aforementioned premier spacing core, particularly the shooters off screens, has struggled throughout the series. We know the shots haven’t fallen, but it’s not simply a collective slump. Boston’s defense as a whole has been swarming, but why have Miami’s movement shooters struggled the most?

Through the lens of the Eastern Conference Finals and the league at large, few players epitomize the why quite like Derrick White. The results haven’t always been there for White during the playoffs, although the post-baby bump has been real (congrats again to Derrick and his family).

Yet, so often when watching White, whether with the Spurs or Celtics, the why is consistently there. The consistency in process matters so much more than the consistency in production. That sounds counterintuitive, but it’s strikingly true in basketball. There’s a line in the sand that wavers among the grains, and White often has crossed the line in spite of his production simply due to his persistent process.

White has routinely neutralized Miami’s release valves and shut off the water entirely for stretches. It’s been like watching a naturally-rich land dry up after a dam is built up stream. That dam is Derrick White, and the Heat have employed any number and variety of players to try to take White out of the picture to free up shooters.

This play from Game 5 stood out.

Notice the quick flip and pushoff from P.J. Tucker in a screening action that was masked with Oladipo setting up as a second screener. White immediately takes Oladipo, and Horford takes Tucker after Jaylen Brown switches onto Duncan Robinson. Brown navigates the screen well enough for the action to die out, and would you look at that... Derrick White still makes a play on the back side.

Already four games and roughly 10 minutes into the series, the Heat are throwing the kitchen sink at an off-ball chaser to free up their shooters. Whatever it takes to force switches, including some semi-illegal  screens. Again, why?

Well, White immediately made his presence felt on Max Strus.

He always shifts his body, scans the floor constantly, and his slight movements are impeccable. So often, chasers get beat off the ball because of too big a stride or a wrong step. White rarely crosses his feet up, and he can appear choppy at times, but it's because he's always on his toes, minimizing space given and maximizing his margins for error. Even with the majority of hard screens, White is making his recovery plays and finding his way back into the picture.

If he does get beat when running a shooter off the line, he's one of the best in the league with backtaps and strips.

Press up that hard on a shooter, and the opposing team will try to use that against you as a pressure point. Lo and behold, Erik Spoelstra dialed up just that, using Duncan Robinson as a screener with White stapled to him, hoping to cause an error on the perimeter.

White shoots that gap absurdly well. Not just well, like Julius Peppers is smiling somewhere watching that. White dips his shoulder back around Bam Adebayo's screen and is back in front of Herro by the free throw line. It's a ridiculous possession.

To say Max Strus hasn't had a fun series would be an understatement. Watch the way White starts to angle himself, immediately prepping to lock and trail as soon as he knew the movement was en route.

White seemingly always has at least one hand on the man he's trailing, making it that much harder to gain separation.

This play is a pinnacle "What else am I supposed to do?" moment. Strus hits White with a swim move, sends him careening into the Tucker screen, and Tucker thuds White. So clearly, Strus should be open, right? Right?

Once again, White comes flying around the screen and reattaches to Strus' hip without being overly physical or fouling, funneling him into the looming Horford.

That consistency has been unreal. While White isn’t necessarily the player finishing possessions defensively (although he still forces his fair share of turnovers), the quietness is what stands out.

White’s giving his best Darrelle Revis impression, shutting off options, isolated against the best deep threats in the game. You see Jimmy Butler struggling to find an opening, wading in the mid-range, but the why? Max Strus can’t get separation. White’s been glued to Duncan Robinson. Gabe Vincent is always seeing a rear contest on pull-up twos. Nothing is coming easy for Miami.

Derrick White has put on a masterclass of screen shedding and route mirroring. His off-ball defense and ability to make things difficult always is a large reason for why Nekias Duncan, Jackson Frank and I had White making an All-Defense team. It's not hyperbole to say that White is among the most consistent defensive players in basketball, something that tends to go underappreciated. Regardless of whether or not the Celtics win Game 7 tomorrow and make their first NBA Finals since 2010, Derrick White's consistent ability to make things difficult deserves shine.