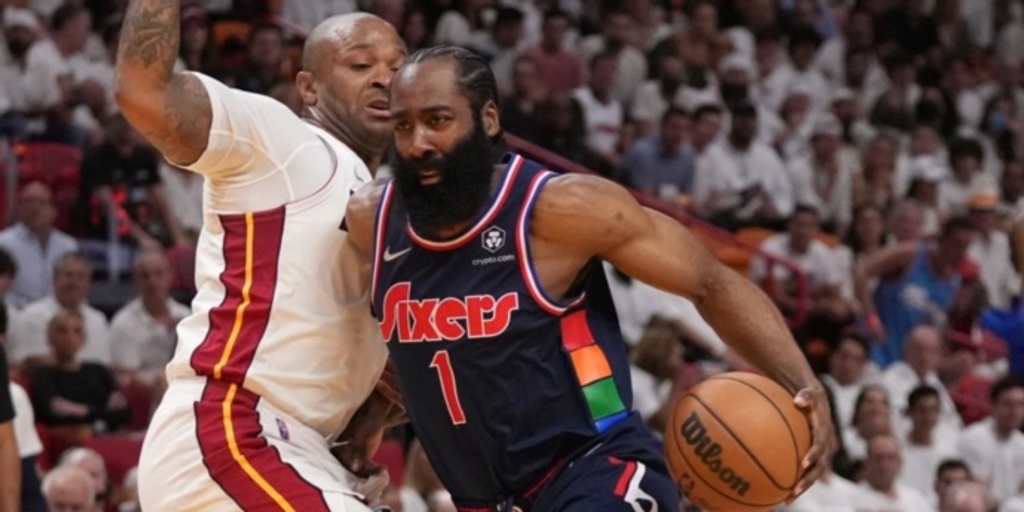 How the Heat dropped the Sixers in Game 5

"Joel Embiid is so distracted, in my opinion, by this MVP thing... he's not there tonight."

That was the opening statement from analyst Charles Barkley during TNT's halftime show. At this point, the Miami Heat held a 56-44 lead over the Philadelphia 76ers. Embiid had 6 points (on 6 shots) and a trio of twos: 2 rebounds, 2 assists and 2 turnovers.

Barkley pointed to Embiid's lack of aggression, and wondered if he was able to channel his alleged frustration.

"Ernie [Johnson], when you are mad about something, it can work both ways. It's working the wrong way for Joel Embiid tonight. He is so distracted... Derek Smith, Rick Mahorn, and Dan Marjerle, they told me, man, 'Dude, you're playing like crap. Get your head out your a** and play better.' Someone needs to tell [Embiid] that."

Strong words, strong take. However, it's a take that ignores a couple of things.

1) Embiid shouldn't be playing right now, and I'd wager he wouldn't be if his current set of injuries — a torn ligament in his thumb and an orbital fracture that's forced him to wear a hammer-proof mask, while also recovering from a freaking concussion — occured during the regular season. Though fans pretend otherwise, injury recovery isn't linear! Sometimes you feel great, other times you're in pain! Add in a hard bump he took during a rebound fight with Dewayne Dedmon, and, yeah, Embiid probably wasn't his best!

2) Aside from Embiid's physical state, he wasn't on the court using 2K's practice mode. There was a basketball team on the other side hoping to limit his effectiveness. They should probably be commended for doing that in Game 5.

Actually, let's focus on the second point for a moment.

Embiid finished Game 5 with 17 points on 7 of 12 shooting. His All-Star running mate, James Harden, racked up a modest 14-6-4 line while shooting 5 of 13 from the field. Normally a duo that lives at the free-throw line, they combined for 6 free throw attempts.

What on earth happened?

Embiid had set 597 picks for Harden since his Sixers debut, excluding Tuesday night's Game 5, per Second Spectrum. They generated a monstrous 1.18 points per possession (PPP) on direct plays; for reference, the Utah Jazz had the NBA's best offense with a slightly lower mark (1.16 PPP).

Teams have been searching for answers since the Sixers traded for the bearded fella. With two players as skilled, as crafty and as different (Embiid's a towering 7-footer, Harden a brick wall at 6-foot-5) as them, each scheme poses a different set of problems.

Sending two to the ball hasn't been fruitful. Harden's too good of a passer, and Embiid's too dominant as a scorer to feed him short-roll opportunities. Playing drop can be problematic if the screen navigation, gap defense and help defense aren't working in tandem.

Switching has been the simplest, erase-the-gaps solution for teams. It's the most frequent coverage the Sixers duo has seen. But that's feeding Harden a big, and Embiid a smaller guy. Despite early concerns about Harden, the Sixers are now scoring over a point per possession when their star tandem gets a switch, per Second Spectrum.

That was the primary method the Heat went with in Game 3 and 4. With a smaller body consistently placed on Embiid after a switch, the Heat had to work extra hard to make sure the Sixers couldn't exploit it. That meant fronting Embiid on the block. And with those fronts, the Heat had to send an extra defender to help on the catch.

It's hard to send two bodies to Embiid while restricting space for Harden drives. To do that while also staying attached to Tobias Harris and being in position to contain Tyrese Maxey, aaaaand keeping tabs on cut-master Danny Green, is a losing battle. You're asking your defense to be perfect at that point. The Heat are elite, but they aren't perfect.

In Game 5, they decided to effectively kill the switch. The Harden-Embiid duo connected for 16 picks. The Heat only switched three of them; of those three switches, only one of them came within the first 10 seconds of the shot clock.

PJ Tucker was tasked with ducking under screens against Harden, basically daring him to shoot from deep. With Tucker playing more conservatively, Bam Adebayo was able to stay attached to Embiid whenever he attempted to roll to the basket.

With this strategy, the Heat were able to turn things into more of a 2-on-2 affair. If Harden couldn't get downhill, the Heat didn't have to completely shift their defense. That means smaller or flat-out eliminated cracks for Harris or Maxey to attack.

Take this early possession in Game 5. The Sixers are looking to set up an empty-corner ball-screen for Harden and Embiid. If a switch is forced, the Heat would have to do some digging, figuratively and literally, to make the SIxers work for a good look. Instead, Tucker baits Harden into a pull-up by ducking under the screen, and still gets a good contest on the shot.

The Heat will live with that.

Harden knocks down a three on the possession below, but look at the rest of the Heat's defense. More importantly, look at the other three Sixers. They're stationary. Without Harden putting pressure on the rim, there's no need for the Heat to sell out. Butler shows a body at the nail, but that's about it.

The Heat will live with that.

One more example, this time from the fourth quarter.

It's Victor Oladipo (heck of a series for him) and Adebayo working in tandem. Oladipo does a great job of reconnecting with Harden. Adebayo is dropping to take away the roll from Embiid. Butler is peeled in for help, but there's no pressing threat here. The Heat don't have to scramble.

There are counters to be made if you're the Sixers. On the possession above, Maxey could either lift to the wing, or get deeper in the corner to really stress Butler out as a help defender. Having one shooter on that side doesn't have the same effect if he's basically in line with Butler.

As my co-host Steve Jones Jr. mentioned on the latest episode of The Dunker Spot, the Sixers can counter drop coverage by having Embiid flip his angle and rescreen if the initial pick doesn't work. They did try it early in the first quarter, and you can see the kind of help the Heat shows from there.

Tucker does a great job of fighting with Embiid, and the possession ultimately peters out from there, but there's a path to making that work.

But it's going to be up to the Sixers to counter the Heat's counter. They have to put the Heat back in rotation like they did in Games 3 and 4.

If Philadelphia can't, everyone on that side will have something to be mad about.