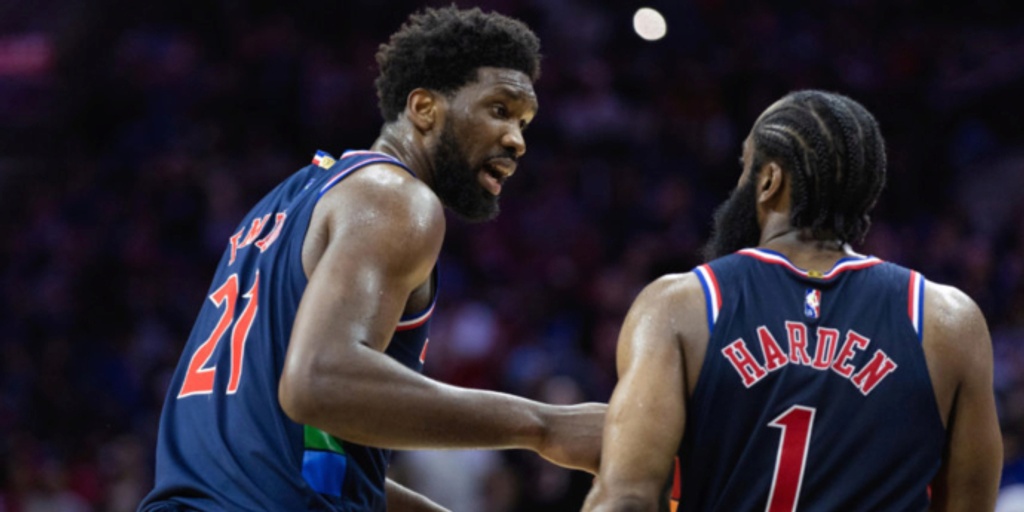 The Philadelphia 76ers will go as far as the Joel Embiid-James Harden pairing takes them.

It's what made their hot start so tantalizing; their pick-and-roll chemistry bloomed quicker than expected, and their individual dominance was accentuated due to the presence of the other.

Dutiful staggering from head coach Doc Rivers — a unit led by Embiid and Tyrese Maxey here, another led by Harden and Tobias Harris there — allowed the Sixers to hum full-time. They looked like absolute powerhouses.

There have been some bumps in the road as of late. They're currently riding a three-game losing streak, with a pair of understandable losses (against the Phoenix Suns and Milwaukee Bucks) and a bit of a head-scratcher Thursday night against the fiesty Detroit Pistons. And while the Sixers didn't lose those games because of their star duo, there are chinks in the armor worth exploring.

When you think of flipping the switch in a sports context, it's usually attributed to (a lack of) maximum effort. Title contenders, especially consistent ones, can hit stretches where they're operating on autopilot. But in marquee games, they're able to ramp up — flip the switch, if you will — and assert their dominance.

For the Sixers, it's less about flipping a proverbial switch and more so about how they navigate switches on both ends.

The Harden-Embiid pick-and-roll has been fruitful overall. The Sixers are generating 1.06 points per possession (PPP) on trips that feature a Harden-Embiid pick-and-roll; that number rises to 1.09 PPP on direct plays — meaning Harden, Embiid or someone they pass to ends a possession. That 1.09 mark is a top-10 mark in the NBA among high-volume pairings, per Second Spectrum.

When opponents switch those actions, all of those numbers dip quite a bit. On trips featuring a switch, the Sixers are generating 0.93 PPP. On those direct plays, it slides even further to 0.87 PPP.

The main culprit is Harden, who hasn't been able to abuse mismatches in the way that we're used to. He's taken 13 shots after forcing a switch with Embiid's man. The results: a 2-of-10 clip from three (with nine of those attempts being stepbacks), and an 0-for-3 mark on twos. He's coughed the ball up twice, and has only drawn three fouls.

Good things typically happen when Embiid is prioritized. He's drawn more fouls and has been a much more efficient scorer; a truly shocking development considering the size and skill advantage. To that point, Embiid has generated an ungodly 1.13 PPP on post-ups against non-centers this season.

Because of the terror Embiid causes on an island, he draws the eyeballs of everyone. He attracts help. It's hard to overstate the difference in shot quality generated by Embiid versus Harden.

In short: Feed the Big Fella.

As for the other side of the ball, I'd like to pose a question for you.

The Harden-Embiid tandem has defended 81 picks, per Second Spectrum; how many times do you think they have switched the action?

Sort through the mental archive. I have all day.

Alright, did you guess 10? It would be a solid start, though you still wouldn't be entirely correct. It's lower.

Five? A miniscule number, but still too high.

The answer is four. Four out of 81. Roughly 5% of the picks they've faced.

Harden has been lauded for his post defense against bigger players for a few seasons now; heck, it might be the only thing he's lauded for defensively. Embiid is a savant in drop coverage, but he's shown the ability to play at the level of the screen or cut off driving lanes when playing ICE coverage. Switching him on occasion shouldn't be an outlandish ask.

Look at this rep against Jrue Holiday.

Matisse Thybulle loses the plot, but that's some pretty solid stuff. Why on earth is this not something we've seen more of?

The most common coverage has been drop, which squarely puts a target on Harden's back. Screen navigation isn't his strong suit or preference. Teams know that; just ask the Suns, who had some fun at his expense during the second half of their win.

The Suns are the best team in the NBA; it's fair to counter that an Eastern Conference team can't shred Philadelphia to the same degree. And maybe switching Embiid is a card the Sixers are holding in the vest until the postseason arrives. Until then, it's worth wondering what things will look like.

You can quibble about the volatility of some of the Sixers' role players and have rotation questions. I sure have. But those concerns will move to the backburner if defenses can neutralize their effectiveness with switches, or if their unwillingness to switch allows offenses to create advantages.