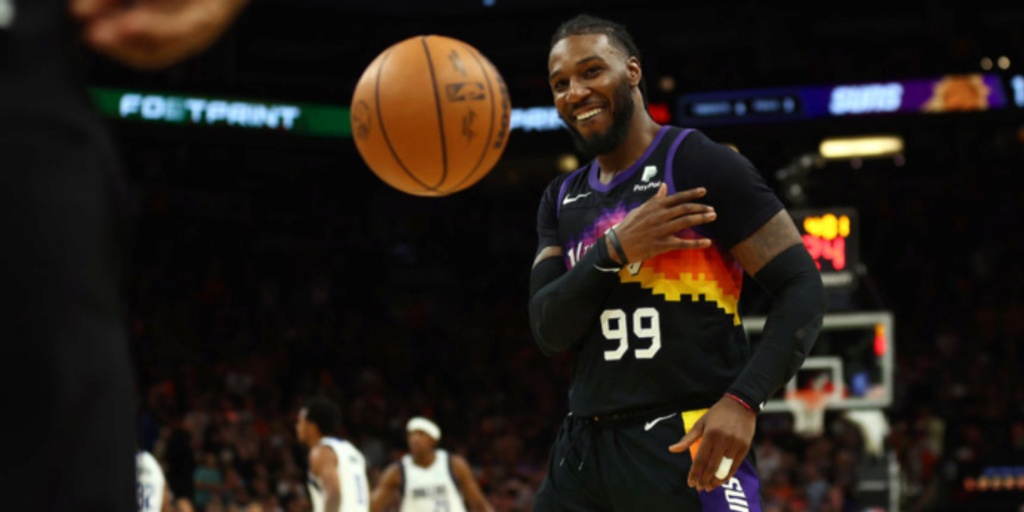 Jae Crowder's versatility has shined against the Mavericks

Among the many components integral to the Phoenix Suns’ dominant rise of the past two seasons is their multifaceted wing trio of Mikal Bridges, Jae Crowder and Cameron Johnson.

Devin Booker and Chris Paul are the headlining stars, but those three forwards are trustworthy shooters, passers and defenders. While their skill- ets in those categories range across a wide spectrum, they all factor into the Suns forging a two-way approach predicated on versatility.

Bridges’ exploits are routinely and justifiably lauded. He finished second in Defensive Player of the Year voting this season and is regarded as one of the NBA’s best budding wings. Johnson shot 42.5% beyond the arc and was a finalist for Sixth Man of the Year.

Perhaps sometimes lost in the shuffle of those two — along with Booker, Paul and Deandre Ayton’s stardom — is the well-traveled swingman in Crowder. His arrival in Phoenix has coincided with the team's ascension. His services are a prominent reason that the Suns lead the Dallas Mavericks 3-2 in their Western Conference semifinal series ahead of Thursday’s pivotal Game 6.

Phoenix has entrusted him with a bevy of duties offensively, spanning from screener, to trigger man catalyzing sets, to off-ball shooter with a pop-gun release. The Mavericks have typically tried to hide lesser defenders like Luka Doncic, Spencer Dinwiddie and Davis Bertans on him. So, the Suns have countered by mildly increasing Crowder's offensive usage via pick-and-pops or other screening actions.

Whether he’s concluding the play with his own points, or merely facilitating a mismatch for someone else to flourish, his screens and capacity to operate off of them have greatly aided Phoenix’s offense.

Crowder is comfortable attacking off the catch to feature his floater, is a perceptive off-ball nomad and brandishes a snappy jumper to burn tardy closeouts. Periodically, he’s even displayed some on-ball juice. Dallas is already grappling and concerned with slowing Paul, Booker and Ayton. A fourth (or fifth) option as a release valve against its compromised defenders has proven burdensome to contain.

Unlike some fifth options, Crowder cannot be entirely neglected offensively, and teams must pay him some respect. Trying to fight through his screen or show against it may create an opening for the ball-handler to pounce. To avoid those scenarios, Dallas is mostly switching, which leaves Crowder and/or the primary scorer in a beneficial situation.

Much like his counterparts on the wings, Crowder provides ancillary traits (some of which are tied to scoring) that amplify his offensive value in a background setting. He’s an adept connective passer and punctuality flows through his general decision-making ethos. In head coach Monty Williams’ 0.5 System that emphasizes quick decision-making, Crowder fits snugly.

Most of his passing opportunities are coming against a tilted defense where he can briefly survey the floor and proceed. Other times, he’s catching the ball in space or on the move and extends an advantage.

Complementary offensive players who hammer home advantages enacted by initiators are critically important. Crowder’s second-round showing embodies that. Dallas is repeatedly playing catch-up before possessions even migrate his way, and he’s only furthering the divide. Historically, his shooting and playmaking ambitions intermittently grow overzealous, but he’s been quite reliable in this series.

Similar to his offensive output, Crowder dips his quill in a number of inks defensively. He’s frequently mucking up drives as a helper around the nail, and can curtail forays into the paint. At 6-foot-6, 235 pounds, he’s someone Phoenix sics on Jalen Brunson and contently sends Doncic’s direction in a pinch.

Neither ball-handler is necessarily enduring a poor series, but they’re both experiencing fewer profits than they did against Utah. The Suns’ collective upgrade on the wings defensively compared to the Jazz is a major reason for the discrepancy, and Crowder falls under that difference.

His strength, mobility and deft hands slyly bother Doncic, while Brunson’s found tough sledding against Crowder’s burly, durable frame. On and off the ball, the veteran is around to entangle himself in the Mavericks’ plans.

During Phoenix’s first-round duel against the New Orleans Pelicans, Crowder couldn’t toss a penny in a fountain. He shot 33.3% from the floor, buried just two triples and scored 45 points on 48 shots across six games. Yet his defense, primarily on Brandon Ingram and CJ McCollum, shined.

Now, the offense has returned and the defense continues to elicit praise. As Bridges’ offense ebbs and flows in this round, Crowder’s revival has been a welcomed addition.

There’s never one archetype necessary to construct a title team. But strong, defensively inclined wings who can cook a few different dishes offensively are a common thread among many recent Finals participants. Both with the Heat in 2020 and Suns a season ago, Crowder is among those teams.

Phoenix isn’t this good without him. He’s only missed the playoffs once in his 10-year career. Although he’s fortunately been surrounded by numerous good coaches and stars, there’s correlation involved.

Crowder fills a diverse secondary role and performs it well, which is all the Suns have ever needed from him.