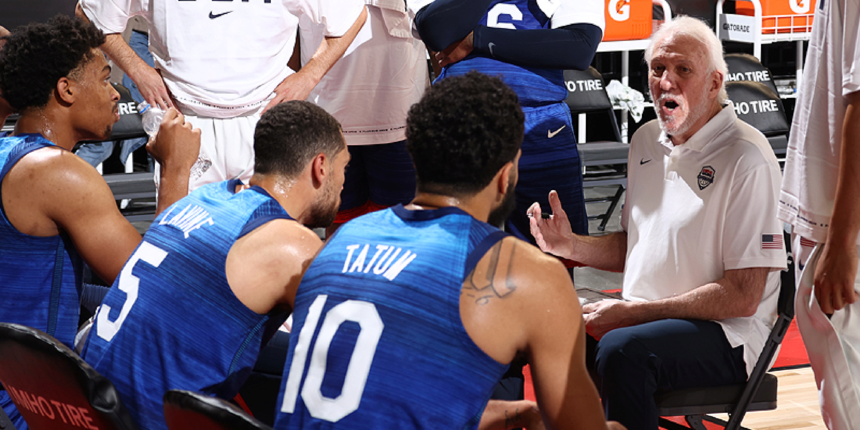 For Team USA, losses in Las Vegas do not matter

As long as they defeat Iran and the Czech Republic in their final two games of the Olympic first round, they are going to the quarterfinals and will have a shot at the gold medal.

So temper your alarm at what has happened these past couple of days in Las Vegas. These games are glorified scrimmages, and no matter what type of swag the Boomers (the Aussies’ nickname) had in Vegas, it will matter little in Japan when the teams will be in different groups.

“No disrespect to them. They’re a hell of a team, obviously, the guys they’ve got on their roster,” Australia’s Joe Ingles said. “And Pop (coach Gregg Popovich) standing up there is always nice to see. But we came in here expecting to win the game, and that’s what we did.”

What has become abundantly clear over the Americans’ first two exhibition games is that they have a roster problem at the center position. Australia outscored them 44-24 on points in the paint, and became the second-straight team to outrebound them despite losing Aron Baynes to an injury early. Kevin Love did not get off the bench after playing only three ineffective minutes against Nigeria, and the U.S. federation has some hard thinking to do about whether this roster needs to be tweaked prior to Tokyo.

As it is, Jrue Holiday, Khris Middleton and Devin Booker are not with the team because they are playing in the NBA Finals, which accounts for one-fourth of the U.S. roster. Try to keep that in mind instead of driving off the cliff over these two meaningless exhibition losses. Repeat after me: This is part of the process.

“These (international) teams are experienced, and we are still working at becoming a team,” Damian Lillard said. “We’re not just going to roll the ball out and beat these teams... these teams have a starting five of NBA players now.”

What was disturbing for the Americans in this latest loss was an inability to score points late in the fourth quarter. A coast-to-coast layup by Jayson Tatum gave the U.S. the lead, 82-80, but Patty Mills proceeded to hit two free throws to tie the game at 82 with 4:13 to go. Mills then made a layup with 3:42 left to give Australia the lead for good, and the Boomers scored 11 of the final 12 points in the 91-83 victory.

“I think defensively we got after it,” Bradley Beal said. “We were way more locked in and energetic on the defensive end, and offensively, we were just flowing. It was very good ball movement, got some good shots. Some of them didn’t fall in the beginning, but we played really well. In the second half, it just a totally different story. We kind of got tired, got lazy on defense, and that’s really where we got hurt.”

Adebayo is averaging only four rebounds per game, and Team USA’s leading rebounder, Tatum (5.0) has not grabbed a single one on the offensive end. The Americans are going to have to step up their conditioning and their three-point shooting (38.3%), and hit the boards harder (they are getting outrebounded by 9.5 per game), which are all doable.

And remember: They have time and FIBA bracketology on their side.

The Americans could even lose to both France and the Czech Republic in the opening round of the Olympics and still win the gold medal. At the conclusion of the opening round, the three group winners and the three teams with the next-best records advance to the quarterfinals. Margin of victory is important in FIBA games, and a large margin of victory against Iran in the Americans’ second game of the Olympics could be enough to get them into the quarterfinals.

Team USA has the benefit of being in the weakest group. The strongest is Group C (Spain, Argentina, Slovenia and Japan), and Group B includes Nigeria, Italy, Germany and Australia. And do not forget that just getting to the Olympics is an accomplishment. Lithuania, Serbia, Croatia and Canada were among the strong international teams that failed to get through qualifying.

So there is a long way to go.

Again, keep that in mind before driving off a cliff.