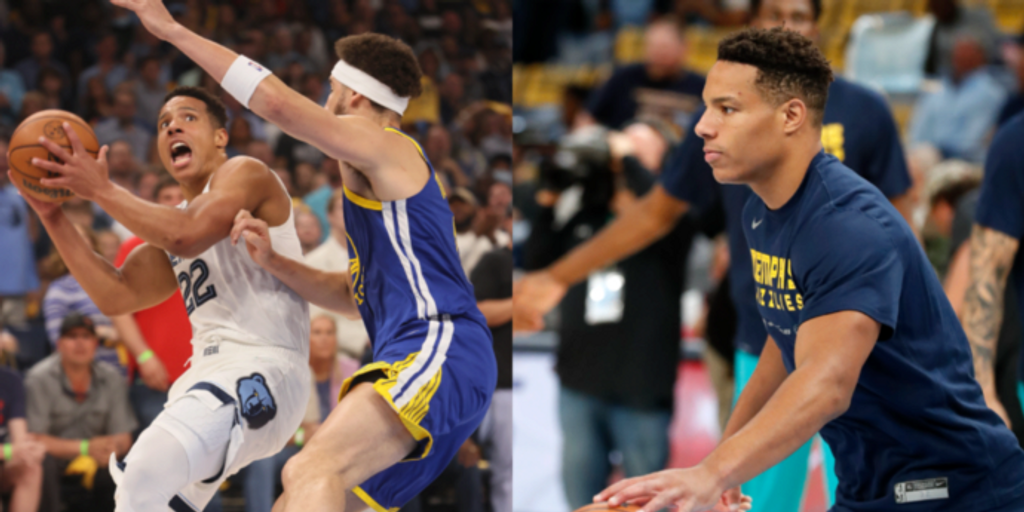 Desmond Bane and the truth about matchups in the NBA Playoffs

As the old saying goes: "The great ones will always get theirs."

Despite being stymied by the Boston Celtics’ physicality, Kevin Durant still averaged 26.3 points per game against them in their recent first-round duel. In 2019, Giannis Antetokounmpo still averaged 22.7 points a night when Air Canada built a wall in front of him. Hell, Dirk Nowitzki stumbled his way into 19.7 points per game when he got punked by the "We Believe" Golden State Warriors in 2007.

When it comes to the great ones, you can try to slow them down, but you can never take them out of the dance entirely.

But what about the really good ones?

For them, we’ll need a different maxim. One that reads: Styles make fights.

In the right matchup, a player may dominate to the point where you wonder why he or she wasn't garnering more praise and recognition in the first place. Catch that individual in the wrong matchup, and you may feel the need to hang missing person posters with his or her image and likeness plastered all over them.

Such is the story of Desmond Bane in the 2022 playoffs – except, fortunately for him, Memphis fans have refrained from doing him as dirty as Brooklyn did D-Will (there’s still time though).

I hinted at this a bit in my recent article for SB Nation, but Bane was the primary beneficiary of the Minnesota Timberwolves’ blitzkrieg initiative for defanging Ja Morant.

An interesting wrinkle here in these playoffs worth keeping tabs on:

This disparity marks the highest change in TS% of anyone on the team w/ or w/o Morant.

Minnesota regularly sent two at the ball on ball-screens featuring Morant (an alignment commonly referred to as a blitz/hedge). This led to the low-man defender constantly rotating over to tag the roller. And as a result, it created an open opportunity for Bane (a.k.a. the almighty conqueror of the fly-by closeout).

Bane was electric against Timberwolves, shredding nylons to the tune of 23.5 points per game on 67.3% True Shooting — a performance that powered many to call him the Grizzlies’ best player in that series.

Now, here we are against Golden State, and, as The Dunker Spot crew likes to say, the math has changed (and, unfortunately, the physical integrity of his back).

First vs. Second Round Stats

The Warriors have opted to switch or go under on screens, sag off Morant when he's got the ball and contest Ja's pull-up attempts softly. This is all in order to avoid conceding interior looks to the league leader in points in the paint. (Hint: It hasn’t worked particularly well.)

The theoretical benefit of this for the Warriors is that they aren’t putting their defense in a state of automatic rotation, which negates a good portion of Bane’s offensive value (he’s made a killing this season capitalizing off the bent floors that Morant materializes for him).

This change in hardwood climate for Bane has coerced an adjustment in his shot diet. According to NBA.com shot-tracking data, Bane has gone from taking 6.2 catch-and-shoot jumpers against the Wolves to a mere 3.5 against the Warriors. With his off-ball volume being down, he’s been forced to resort to multi-dribble looks to try and get himself going. And at this point in his development, these situations are just not optimal.

With all this said, Golden State has still been showing help at the nail on Morant’s drives, but every defensive scheme has its own idiosyncratic help principles for different players/matchups.

While Golden State's off-ball defenders may sag off and offer supplementary aid to whoever is tasked with point-of-attack duties, they are hesitant to overhelp off of Bane (which is great for the Grizzlies spacing).

Also, to their credit, the Warriors have been particularly stout in navigating screens when the Grizzlies attempt to feature Bane in his usual off-ball sets; Steph Curry has been especially diligent in these spots.

Warriors clearly locked in on Desmond Mane, comes off this screen, Klay there on the catch. Not giving him room. pic.twitter.com/CmMwn8gyfJ

This situation reminds me of a Mike Prada tweet I often ponder over internally in the doldrums of my mind. (Congrats on the new position, by the way!)

Bev is well-equipped to guard Booker b/c he hits first. Devin wants to speed into the play, stop, hit you, then pivot off you. You disrupt that by getting into him early, and that's what Bev does.

(This is also why Luka fried him. His move cadence is the inverse of Book's) https://t.co/aLvAd2k7EZ

Don’t get me wrong. Bane is a better basketball player than Patrick Beverley (I have him in the top 50), but the former's current struggles are parallel with the ones the latter experienced last postseason.

Beverley went from starting in Games 1 and 2 against Dallas, to coming off the bench in Games 3 through 5, to never taking off his warmups in Games 6 and 7. In the following round, he was in the rotations, but only garnering 16-to-20 minutes with the second unit against the Utah Jazz.

However, Beverley would find his way back into the starting lineup against the Phoenix Suns in the Western Conference Finals, and administered a 9-of-31 shooting chokehold on Devin Booker in the 35-plus minutes he shadowed the All-Star guard.

Another example of this trend of matchups dictating production can be illustrated through Fred VanVleet, the guy many now call “Freddy All-Star.”

In 2019, the smaller guard had no place against the Philadelphia 76ers’ lengthy backcourt duo of Jimmy Butler and Ben Simmons, and so, he was relegated to 16.9 minutes per game and posted an awful 24.3% TS.

However, VanVleet's math changed when he was gifted a newborn child and a more formulaic backcourt dynamic against the Milwaukee Bucks. In that series, he averaged 27.3 minutes and sizzled his way to an excellent 64.4% TS efficiency.

And then, in the following round, VanVleet's penchant for screen navigation and chasing Curry around off-ball made him an essential ingredient in the Toronto Raptors’ title-clinching series.

We could do this all day, but for the sake of time (although it is a flat circle), we will not be doing that.

The intent of this written soliloquy isn’t to argue for less Bane in this series. He’s so good that his defensive intensity, and the threat of his marksmanship, is enough to warrant a high-minute load (if he’s healthy).

The point of this is to offer an explanation for his recent dip in play, and provide some solace for concerned fans who may fear that his recent slump hampers his long-term potential.

Unless you are a superstar-caliber player — or possess an incredibly versatile skil lset — your production on a series-to-series basis is likely to vary quite a bit based on your matchups.

Such is the truth about the NBA playoffs.