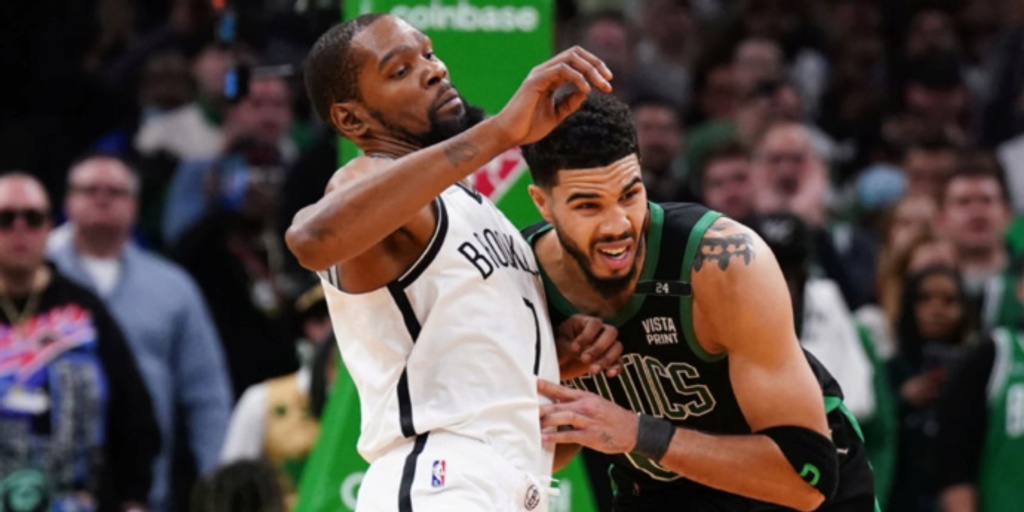 The Celtics' defense on Kevin Durant showcased greatness in Game 1

Before the 5-minute mark of Game 1’s first quarter between the Boston Celtics and Brooklyn Nets on Sunday, Kevin Durant committed 3 turnovers. In last year’s first-round series, he averaged 2.8 giveaways, and Brooklyn cruised to a 4-1 series victory over Boston’s shorthanded squad.

But these teams are in starkly different spots this season. The Celtics are much better prepared to counter the Nets’ explosive ethos. They finished atop the league in Defensive Rating, and were a supremely dominant club from late January onward. Durant’s trio of early turnovers helped emphasize the radical changes for each side and why the ensuing 43 minutes Sunday were similarly frustrating for him.

By the game’s end, the superstar forward logged 23 points, 4 rebounds, 3 assists and 6 turnovers. Boston contained him to a 9 of 24 night from the field and a paltry 43.9% True Shooting. A dash of variance was at play, yet the Celtics also executed a brilliant game plan against him. More 9 of 24 outings should not be expected, but the 33-7-7-2-1 line on 69% TS that KD rolled to in last year’s seamless series win should not be expected either.

What immediately stood out in the Celtics’ approach was their masterful scout work. They clearly studied Durant’s tendencies and imparted them on their defensive personnel, who promptly and impressively adhered to the strategy.

One of the hallmarks in slowing Durant was Boston’s timely help. It knew when to ambush him without allowing him to scan the floor and deliver eagle-eyed reads for lucrative shots.

Durant’s first turnover summarized that gambit. Jayson Tatum blitzed him a half-second later than an immediate trap might arrive, and stunted at his handle just as Durant brought it back to his left hand (the one closest to Tatum). Boston traditionally switches ball-screens, so it’s clear Durant wasn’t expecting a trap, and Tatum’s imposing frame flustered him into the gaffe.

Varying the coverage on Durant sat central to the Celtics’ philosophy. When a screen came his way, they toggled among switching, trapping and dropping against him. Switching remained the dominant tactic, but they mixed it up.

Similarly, the primary defender on Durant oscillated. Tatum assumed the grandest portion of the pie, while Grant Williams, Jaylen Brown, Marcus Smart and Al Horford all garnered notable time versus the silky scorer.

Superstars love to discern the inclinations of a certain defender or scheme and proceed accordingly. Boston’s carousel of schemes and defenders ensured Durant never found comfortable footing. He consistently had to adapt to different looks from a slew of shrewd, effective blueprints.

For instance, Durant excels at passing out of double teams, and Boston clearly monitored that trend. So, the team generally deviated away from hard, obvious doubles and avoided providing him with easy outlets.

Rather, the Celtics committed to late stunts, digs and rotations that occurred once any sort of passing read was much more complicated for him than it would be if a standard double was sent. His shot-making prowess renders a lot of these choices still worthwhile, but there were some missed windows as a result of Boston’s scheme — one predicated on helping once Durant had already determined his decision.

In the clips above, note where Durant could conceivably pass before the help comes. There aren’t many suitable options, especially in conjunction with what Durant could create individually — at least prior to a second defender entering his airspace. Pristine off-ball positioning amplified the on-ball defense’s potency.

The hasty timing extended to Boston’s constant disruption of Durant's rhythm. Although his release point is higher than virtually anyone can reach, KD's gather phase is quite slow and elongated, going from near his knees to above his head. If executed properly, there is ample time on that path to intrude.

Horford and Tatum’s marriage of size and mobility were particularly valuable against Durant. They crowded his handle, burrowed into his body and limited his chances to cleanly transition into jumpers. Durant's handle is quite good for a 7-footer, but it's still susceptible to being exposed when defenders can get underneath him. Both Horford and Tatum accomplished that periodically.

Durant found some air space when Brooklyn shifted to high ball-screens for him. If one of Tatum or Horford — each of whom at least approximate his size and mobility (approximate is very loose) — is the primary assignment in Game 2, there will probably be more of those possessions. Of course, Boston’s switch-heavy defense might neutralize those screens, but Tatum and Horford aren’t slithering around picks in the manner Smart does.

If Durant can attack with more space — which high ball-screens should allow for — better results may follow. Though gaudy three-point volume isn't his usual calling card, he’s proven amenable, and leaning into greater pull-up volume could alleviate some of those sticky possessions.

One of the ripple effects of Boston's physicality with Durant was that it repeatedly sent the Nets to the line. Brooklyn's Game 1 free-throw rate was .308, up from .246 during the regular season. Four of the Celtics’ five starters amassed 4 fouls. Horford and Williams each had 3.

Durant will also likely just make more shots. Boston influenced a number of his misses, but some of his greatness rests in his impervious nature against contests. That trait will help him get back on track.

If KD's shot diet remains similar with more preferable outcomes, the Celtics will accept it. Durant will too though. The challenge of slowing him is he’ll bury you with a bunch of shots that you’ll seemingly live with until you’re 10 feet underground and totally oblivious.

Yet, Boston flummoxed him in ways scarcely witnessed over the past half-decade. The normal composure associated with his dead-eye jumper and offensive prowess hardly seemed prevalent in Game 1.

He should right the ship, but Sunday’s numbers were not headlined by randomness. The Celtics studied Kevin Durant's game, manipulated his dispositions to their benefit and guarded him beautifully — much like they’ve done all season as the NBA’s premier defense.