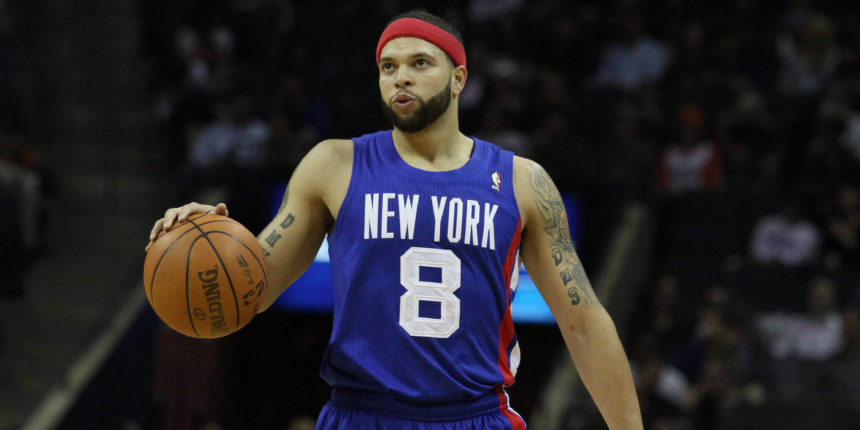 Deron Williams dropped 57 a decade ago... what could've been?

You are now invited into the NBA rabbit hole you didn’t know you needed.

Do you remember Deron Williams before he boxed Frank Gore? The Deron Williams before toiling away with his hometown Dallas Mavericks and ring-chasing with the Cleveland Cavaliers. The one before the New Jersey Nets moved to Brooklyn. The one that got you banned on forums because of how vociferously you may have argued that he was better or worse than Chris Paul.

Ten years ago today, on March 4, that dude dropped a franchise-record 57 points. Yeah, you’re getting old too, son. (That's still a Nets record, by the way.)

That game itself, otherwise, wasn’t all that memorable. The Nets had about one month left as representatives of New Jersey before relocating to Brooklyn later that year. They, at 12-26, won 104-101 against a Charlotte Bobcats (!) team that dropped to 4-31 on the lockout-shortened season.

Starters in the game included other glorious names like Kris Humphries, who was second on the Nets with 11 points (and 13 rebounds) and played 40 minutes. DeShawn Stevenson finished with an 0-2-1-0-0 line and had one shot attempt in 29 minutes of play. Eduardo Nájera, DeSagana Diop (who started for Charlotte!) and Shelden Williams got some run, and Tyrus Thomas played about seven minutes.

Kemba Walker was still coming off the bench for D.J. Augustin. Corey Maggette was the game’s second-highest scorer, finishing with 24 points on just 4-of-12 shooting, but converted 15-of-16 free-throw attempts.

But it was also one of Williams’ last awesome NBA moments while still in his prime, a career cut short due to... well, it depends on who you ask, and/or what you believe. It’s either related to injuries, which we began seeing take a toll on Williams after the Nets moved to Brooklyn. Or other stuff, like constant clashes with Paul Pierce and Kevin Garnett during that infamous 2013-14 season together.

Say what you want about Stephen A. Smith — and this was before he essentially became the face of ESPN — but I vividly recall him here in New York saying things like, “Deron Williams has the easiest job a franchise player could ever hope to have!” And, “All he has to do is ball,” as Williams, frankly, didn’t.

There was also the story that Pierce once mocked Williams, saying, “What’s the matter now, Deron? Your ____ hurt?” (If I’m blanking it and not even giving you a letter, just know it was raw.)

The Nets had Williams — generally hated by their fans to this day — Pierce, Garnett, Joe Johnson and Brook Lopez as a championship-level starting-five (in theory) entering the 2013-14 season. And the head coach was a first-timer in Jason Kidd, who played an integral part on the underappreciated 54-win New York Knicks the season before as a player.

You may also recall the famous Jackie MacMullan profile on Pierce when he was a Washington Wizard in the early John Wall and Bradley Beal days. As far as we know, this was before Wall and Marcin Gortat wanted to box each other’s heads off.

“Before I got there, I looked at Deron as an MVP candidate,” Pierce said to MacMullan. “But I felt once we got there, that's not what he wanted to be. He just didn't want that.

“I think a lot of the pressure got to him sometimes. This was his first time in the national spotlight. The media in Utah is not the same as the media in New York, so that can wear on some people. I think it really affected him.”

After noting that Johnson is quiet and doesn’t want much attention, Pierce continued.

“There's a lot of secondary guys on that team. KG and I went there looking at them as the main guys who would push us, because we were advancing in years. But we ended up doing all the pushing,” he said.

(Given what we’ve learned, it’s mildly surprising that Williams didn’t just fight him after seeing this, but anyway.)

Williams remains one of the grand "what ifs" of this century. And let’s be responsible — injuries are one of the driving reasons for his sudden downswing from stardom to shell over a... hmm... two-year span? But we do what-ifs with guys who battled injuries all the time: Penny Hardaway, Brandon Roy, Greg Oden, Grant Hill and Derrick Rose, to name a few.

With Williams, just visualize, given how the game was going — and where he had been trending at one point — where he would’ve evolved to if the talent, health, discipline and mentality all added up. And it doesn’t always come together, which is why it’s not responsible to purely say “talent wins” if the implication that talent alone is enough for substantial success.

And he clearly worked hard.

Williams averaged 19.5 points and 10.2 assists from 2007 to 2012 on .460/.346/.827 shooting splits. He attempted four threes a game at a respectable level and nearly six free throws per contest during that span. He consistently was among the league leaders in assists, while simultaneously profiling as one of the NBA’s best scoring point guards. His True Shooting percentage was at 56.8% during those five years, hitting 60% in '07-08 and never dropping below 56.6% until the Nets’ last year in New Jersey. (Understandable when Humphries is your second-best player for most of the season.)

We weren’t letting ‘em fly from three the way we are now, and Williams was, like most others, streaky — but you had to guard him out there. The 35% perimeter clip in his peak reflected the near 36% for his career. The assists came with some high turnover numbers — Williams averaged 3.5 turnovers per game in those five seasons — but that still gave him a near 3-to-1 assist-to-turnover ratio.

Williams wasn’t a usage monster either — his rating was never higher than 25.8% until a 30.1% usage in 2011-12, but, again, look at the roster. Even so, he was eighth in the league in usage; otherwise, he never cracked the league’s top-20. You know who did during that span? And on multiple occasions? Corey Maggette, Michael Beasley, Stephen Jackson, his then-teammate Brook Lopez and his former teammate Carlos Boozer. (Rashad McCants, Andrea Bargnani, Charlie Villanueva, Josh Smith, Rodney Stuckey and Jordan Crawford were in the top-20 as well during those days.)

Until the trade from Utah to New Jersey, Williams would be in the top-20 in VORP consistently too. Most hadn’t yet cared about some of those metrics though.

And his strength was a big part of his game. Williams was built like Eric Gordon, had powerful crossovers like Baron Davis, a passing fluidity that neared Steve Nash, and an offensive creativity that rivaled CP3’s — which is how all those damn fights started.

Robert Sarver: Suns are willing to pay luxury tax and 'go for it'
yesterday

Woj: Danny Green to have MRI on knee
3 days

It never came together, and everyone missed out because of it. Imagine if his prime stretched into a couple of those Brooklyn seasons... but don’t imagine too hard because logistically, it would be a pain in the ass to lay out. But if he did ball out the way people on microphones, in forums and in his own locker room called for? Man.

Williams would've been toe-to-toe in the mid-2010s against then-prime-entering stars such as James Harden, Stephen Curry and Damian Lillard. In his own conference, we might’ve seen him in the playoffs go crossover-for-crossover with Kyrie Irving, or bump-for-bump with Kyle Lowry, or tough-finish-for-tough-finish with Wall. All of that while still mirroring a stat line of roughly 20 points and 10 assists per game on efficient shooting, further increasing his three-point and free-throw volume in the process.

That said, he did give us multiple All-NBA seasons and, again, a whole-ass fight with Gore. He says he’s one-and-done, but that might be because none of you have offered him the Pierce one yet. And as silly as that sounds, you know you’d watch.

But seriously, peak Williams was epic. If he continued along the path he had been, we don’t know if it would’ve brought the Nets a title — but they would’ve been damn close.

2022 NBA offseason preview: What's next for the Milwaukee Bucks?
1h

Inside look at the Suns' rise: The making of an elite NBA organization
yesterday

In Philadelphia, Jimmy Butler gets the last laugh
3 days

ABCD Camp: The mecca of high school basketball circa 2001
3 days