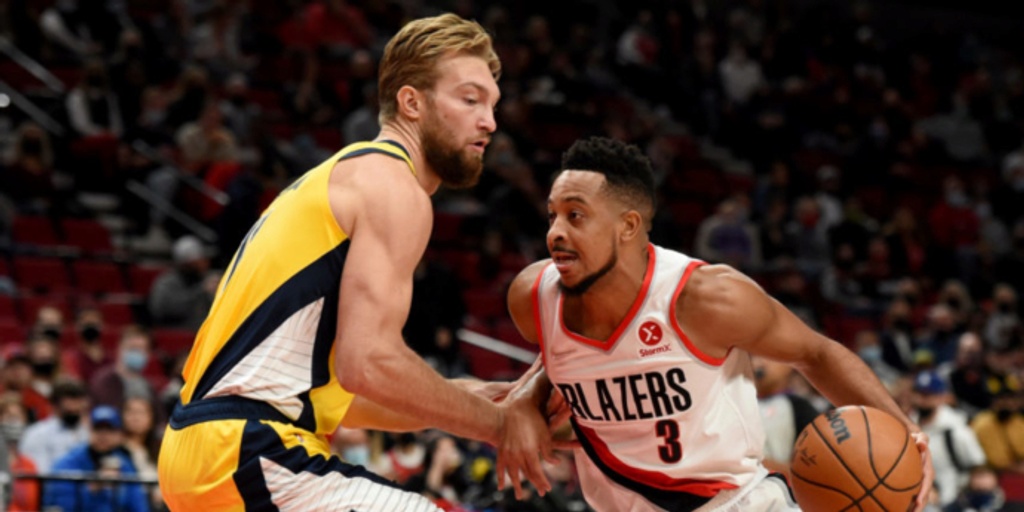 The New Orleans Pelicans and Sacramento Kings both pulled off major blockbuster deals in which they acquired two inarguably franchise-changing pieces. CJ McCollum enters the Bayou as a strong scoring complement to Brandon Ingram, and a hopefully-soon-to-be healthy Zion Williamson. Two-time All-Star Domantas Sabonis helps form an intriguing one-two punch with De’Aaron Fox. However, Sacramento moved out arguably its best player this season in Tyrese Haliburton to make the tandem happen.

When the NBA implemented the play-in tournament, some were skeptical of how this would make a real impact. Well, based off Tuesday's moves alone, the play-in is proving to be a game changer for playoff-hungry organizations.

Both New Orleans and Sacramento aren’t even in the discussion for a top-eight seed in the reloaded Western Conference. Where it gets interesting is that a team only needs to finish with at least the No. 10 seed to technically make the “playoffs” for a winner-take-all bout. The Pelicans and Kings are right in the thick of the play-in-palooza.

The race for No. 10 in the West is officially on. Three and-a-half games behind the Los Angeles Lakers, New Orleans is staking its claim with a measly 22-32 record. Only three games behind the Pelicans, Sacramento checks in at 20-36.

Sandwiched between New Orleans and Sacramento, the Portland Trail Blazers and San Antonio Spurs have another 24 hours to decide if they’re in or out as well for this faux playoff sprint. (Portland trading away multiple pieces strongly suggests a team that's leaning toward losing in the short-term, although they have been linked to Jerami Grant so we'll see.)

During this trade-deadline period, the Pelicans and Kings decided to push the chips in. Is this the new normal within the NBA, where double-digit teams in each conference believe a 10-seed is the new barrier to break?

Pressure at the top was the main theme for Tuesday’s terrific transactional day.

There’s no doubt about the pressure being applied on Pelicans EVP David Griffin to steer the ship in a winning direction for New Orleans. Zion Williamson’s future is murkier than expected due to injuries — that's another element to take into consideration.

Sacramento is experiencing a historically-long postseason drought. Any potential drop of water to chase in the desert that is the team's small playoff probability, you better believe Sacramento is going after it. That’s exactly why Sabonis is now a foundational building block with Fox in Sacramento. The timeline for the Kings to reach the postseason is now, which might explain why Haliburton was shockingly sent to Indiana. Kings management is hoping, for their own job security, that Fox and Sabonis instantly bring magical chemistry to ignite an above-.500 stretch of winning basketball.

Both trades seem to show opposite sides of the coin for how short-term gain could have long-term ramifications. I’m high on McCollum’s fit in New Orleans, as he provides a much-needed veteran presence who can provide multiple assets to assist the team's inconsistent offensive attack. Brandon Ingram and Williamson will finally have someone who can bring aboard winning habits. Also, Larry Nance Jr. is an underrated piece in the trade for the Pelicans, providing an athletic big who’s versatile enough to make an impact on both ends.

In Sacramento, Sabonis and Fox might bring a fake playoff berth and potentially even a real seed within the next three seasons, as well as bring dynamic offensive firepower. But was it worth it in the end? Again, for a playoff-starved organization like Sacramento, maybe a drastically-judged jaw-dropping deal could be what they see as the key to the team's most realistic immediate jump. Haliburton has All-Star upside, which he’s shown throughout his first two seasons. On the other side of the deal, now the Pacers have one of the Association’s best assets and overall young players aboard.

This year’s playoff picture in the West classifies itself into an interesting tier system:

Expect to see some more shuffling across the NBA’s leaderboard over the next 24 hours, just before the trade deadline. Whether it be true Finals threats or teams fighting for the lowest possible playoff probabilities, two seemingly desperate teams bring to light a potentially new normal for league-wide parity.

The Pelicans and Kings could easily be real winners from these deals now — and for that matter, multiple years down the line. McCollum and Sabonis turn weaknesses into plausible strengths for their respective new teams.

Play-In-Palooza 2022 is going to be electric. New Orleans and Sacramento booked their first-class tickets, but will any other overzealous teams dare join them?