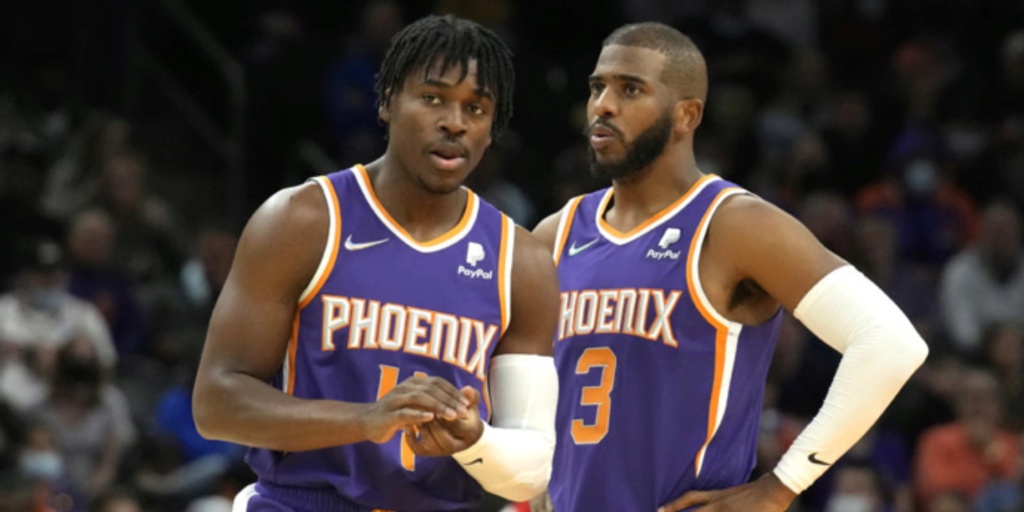 Trying to capitalize on a golden opportunity to make a repeat NBA Finals run, the Phoenix Suns made two moves at last week's NBA trade deadline.

First, Phoenix dealt 2020 No. 10 overall pick Jalen Smith and a 2022 second-round pick to the Indiana Pacers for Torrey Craig, who was with the team last season and perfectly fit its vision as a versatile two-way wing. Then, less than an hour later, Suns general manager James Jones made another under-the-radar move to bolster the bench.

Phoenix sent cash considerations to the Washington Wizards for reserve combo guard Aaron Holiday, who the organization was actually very interested in throughout the 2018 pre-draft process. If not for the Pacers swooping Holiday in the first round, Phoenix was hoping Holiday would slip through the cracks to the top of the second-round to pair him with Deandre Ayton and Mikal Bridges.

During his NBA career, Holiday is now on his third team in four seasons. However, Phoenix’s team-oriented system could be the best bet to bring out the intriguing upside Holiday displayed at UCLA as a consistent three-point shooter and on-ball defender.

In three games with the Suns, Holiday is averaging 7.3 points and 2.7 assists on an outstanding 84.6% True Shooting percentage. Of course, small sample size alert, but the mixture of attributes Holiday has brought aboard in Phoenix is a noticeable upgrade on the margins.

“He just continues to play the kind of basketball we like to play,” Suns head coach Monty Williams said after the Suns’ 124-121 win over the Rockets on Wednesday. “Defensively, he just gets into stuff and he comes up with balls. I thought the inbounds play under the basket where he stole it and laid it up, that’s Aaron [Holiday], and I like his willingness to take shots.

"And then, there was one play where it was just a muddied offensive set, and he dribbled all over the place like [Steve] Nash and then just went to the basket and laid it off the glass, and I was like, 'He’s got some moxie and some toughness.' He’s come here and he’s fit right in.”

As Williams alluded to, Holiday has stepped right into his role and thrived within the flow of Phoenix’s “0.5” system. Holiday not only has shown a more robust skill set than Elfrid Payton — whose non-floor-spacing equity continues to be a bugaboo for the Suns’ reserves — but his defense in short spurts has also been fantastic when flanked by Craig and JaVale McGee.

It’s easy to envision when the postseason arrives that Holiday won’t play many meaningful minutes. Once Cameron Payne returns from an ankle injury after the All-Star break, Holiday’s already minuscule role will dwindle further.

Looking past Payne, though, could Holiday usurp Landry Shamet as the fourth guard? With Shamet’s inconsistent play all season long, especially from a shooting perspective, it’s not too far-fetched of a scenario.

Stockpiling depth across the board, the Suns now have options behind their dynamic backcourt duo of Paul and Booker. Shamet slides into the backup shooting guard minutes for Booker, but Holiday can also provide a punch there if needed. Paul hurt his hand in the Suns’ win over the Rockets, so if he’s out for any meaningful time and they want to go very conservative with his recovery time, they have three capable players who can split duties in Payne, Payton and Holiday.

Holiday is a ball of energy, which showed itself frequently throughout his first week with Phoenix. Only giving up cash considerations for a 25-year-old reserve guard is another win for Jones, who has a very strong resume to repeat as NBA Executive of the Year with the Suns’ historically strong start at 48-10.

The Suns know their time to compete for championships is right now, especially with Paul still playing at an MVP-like level during his age-36 season. When canvassing through the Suns’ rotation, there are very few, if any, real holes to analyze.

Holiday isn’t a game-changing move so to say, but his more consistently stable two-way play could be what looms large when shuffling out who fits within the Suns’ playoff rotation in a few months time. The early returns with Holiday in Phoenix have been outstanding, but now the real interesting tidbits will be monitored relating to how Williams balances the Suns' guard rotation moving forward.