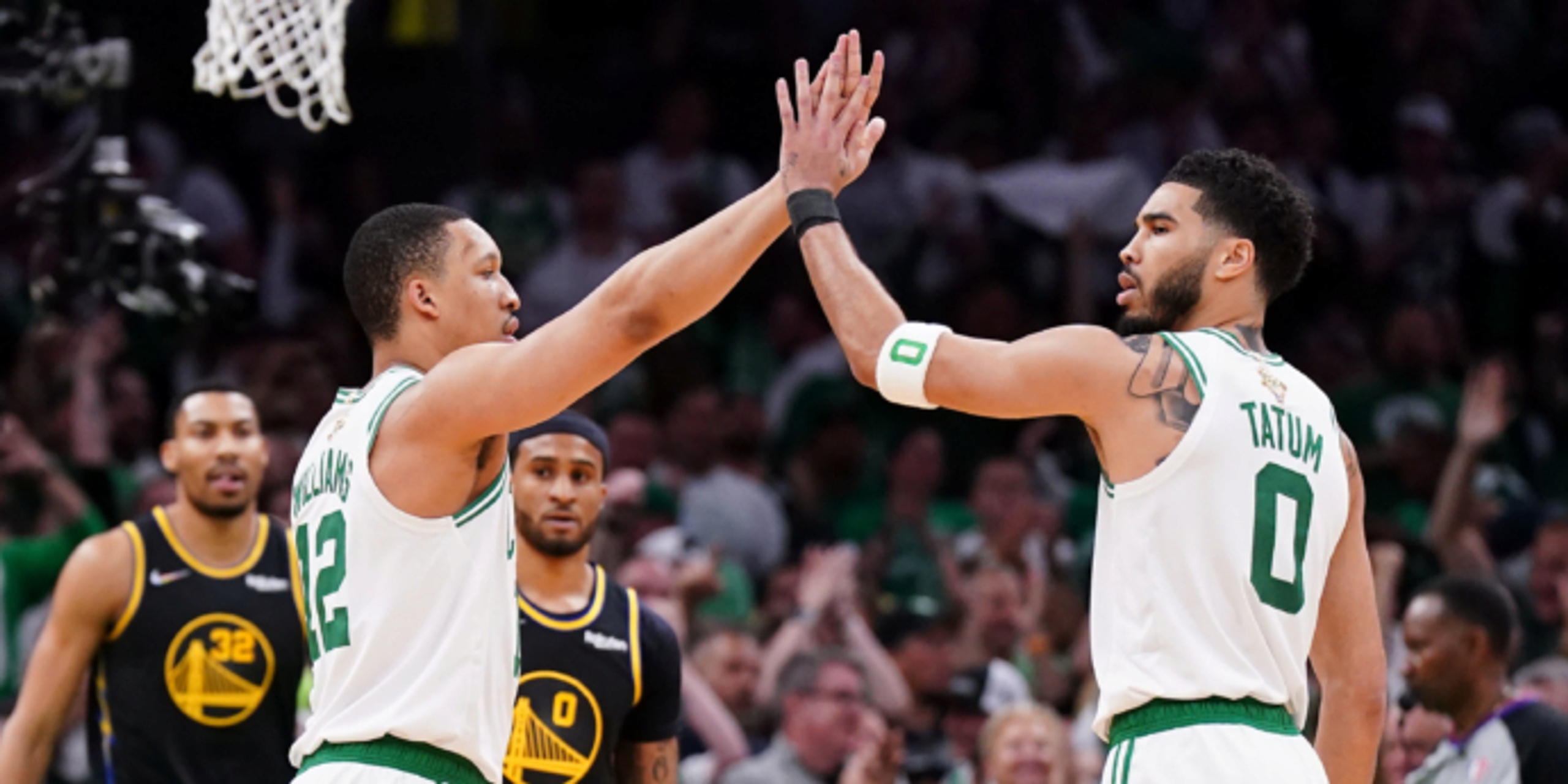 First-year head coach Ime Udoka never appeared in the NBA Finals as a player, and made it there for 12 games as an assistant coach with the San Antonio Spurs. Steve Kerr had already spearheaded 21 Finals games and three titles as Golden State's head coach, in addition to his 27 games as a player.

Boston looked like a deer in the headlights during its three consecutive losses in part because it had never been here before. Pushing one of the great dynasties in basketball history to six games may not have been the desired achievement, but it's still a notable one. And getting to Game 6 of the NBA Finals after sitting 11th in the East standings as late as January? Count me as somebody who was a doubter.

More importantly: This playoff run is neon, flashing proof that this Celtics core, headlined by Jayson Tatum and Jaylen Brown, is capable of winning a championship. All the chatter about their viability as a duo, Marcus Smart's status as point guard, Udoka's capability as a coach and so on, is now unequivocally just chatter.

Obviously, the franchise shouldn't be satisfied with a loss. Of course it can tweak the roster and players can improve their individual skills. But Boston found an identity in the regular season, tested it against some of the toughest teams in the league and proved it can propel this team to basketball's ultimate stage.

"Nobody even had us being here, let alone in the playoffs,” Celtics guard Marcus Smart said postgame following the Finals defeat. “It definitely is tough. But it’s definitely one of those things we’ve been through hell to get here, and you take that. You know what I’m saying? We’ve got to use that.”

Those dejected by the final outcome will point to Tatum's dismal Game 6 performance, in which he scored 13 points, shot 6-for-18 from the floor and coughed up five turnovers. They'll roll out his 100 total giveaways in these playoffs, the most by any player ever in a single postseason run. And they'll be right that his handle and decision-making fell short against one of the league's best defenses.

Jayson Tatum had 13 assists last night - the most ever in an NBA Finals debut. Here's what stood out to me about them (thread) ⬇️⬇️⬇️

Early on Golden State is really watching driving/rolling lanes. Draymond is sitting on the low block which means Smart can get open. AST 1 pic.twitter.com/sCSnNwUxuj

What about his 13 assists (the most ever in a Finals debut) against two turnovers in Game 1 though? Or his 6.2 assists per game in the postseason? Tatum had to lead Boston through 24 playoff games, including two seven-game series, to set that undesirable and meaningless total turnover record. He became the first Celtic to crack the All-NBA First Team since Kevin Garnett in 2007-08 and the second to do it since Larry Bird in 1987-88. There's no more debate over Tatum's playmaking ability or his star power.

Brown similarly struggled with turnovers in Games 5 and 6, posting five in each contest with some painful moments late where he simply lost a handle on the ball. But he also did his best to carry the scoring load with 34 points in the last defeat. Brown ended up shooting 51.0% on drives to the basket with an 11.7% assist rate and 7.8% turnover rate in the Finals — all great clips.

If you're still doubting Brown's ability to improve on the ball, just read Mark Schindler's retrospective on the star's polish versus his lone college season. Which two-man Celtics pairing had the highest plus-minus per 100 possessions in the regular season? Brown and Tatum, through all the ups and downs, at plus-14.3. They were also third on the team (plus-4.3 per 100 possessions) in the postseason. The discussion over this duo's long-term cohesion is settled by the numbers and by its achievements this season.

The spatial awareness and hand-eye coordination needed to make this pass is ridiculous. What a spectacular player/decision-maker he is. pic.twitter.com/vVI2HDKHCK

Smart set a career-high in assists per game (5.9) for the third consecutive season and maintained that rate throughout the playoffs. In Game 6, while some folks still somehow questioned his merit as a floor general, Smart dished out 9 assists. He actually ranked eighth among all potseason players in passes per game, and while that doesn't shield him or the Celtics from criticism about their offense, he certainly moves the ball.

I have questions about how the Celtics used Smart in the Finals — why they didn't post him up more often, and why they kept him off the ball when Tatum and Brown were struggling (both of them). But we're well past wondering about Smart's "true point guard" acumen and using him as the go-to piece in trade machines. Smart is a keeper because he's a core part of Boston's offense, nevermind also being the first guard in over 25 years to win Defensive Player of the Year.

Then, we get to some pivotal contributions from other players that underscore Brad Stevens' slam dunk of a first year as president of basketball operations. Al Horford obviously headlines the success. I thought he was no longer a starter at the beginning of the season; instead, the longtime, familiar veteran was everything Boston needed in a low-usage big and so much more, and he battled in all 24 playoff games at 36 years old.

Robert Williams III had the healthiest regular season of his career and reinforced his status as one of the most fearsome shot-blockers in basketball. He was visibly struggling with mobility in the Finals, but fighting valiantly, considering he played the series on an injured, swollen knee. Grant Williams didn't impact the Finals in the same way as his regular season, but he was instrumental in series wins over the Brooklyn Nets and Milwaukee Bucks. Derrick White fit right in as a defensive cornerstone who gave Stephen Curry — one of the sport's transcendent offensive weapons — all he could on screens and on the ball.

Udoka certainly won't, but he should gloat about this defense. In one year at the helm, he overhauled Boston's entire scheme, made mid-season adjustments, took on new players and molded a unit that ranked first in regular-season Defensive Rating (106.9) and second in the playoffs (107.6). It frequently kept Boston in games and series as the offensive output waxed and waned.

Now, Udoka and Stevens have a full offseason to further their vision after proving it will work in their first year together. They don't have many available pathways to move, though.

The Celtics only have the No. 53 pick in the 2022 NBA Draft and the taxpayer mid-level exception to sign players outright. They do, however, have several trade exceptions, headlined by a $17.1 million TPE from dealing Evan Fournier.

The entire main rotation is under contract for next season (Horford's deal is non-guaranteed, but there are already indications Boston will guarantee it). Nik Stauskas and Malik Fitts have non-guaranteed contracts. Matt Ryan and Brodric Thomas are restricted free agents, and Boston holds team options on Juwan Morgan and Sam Hauser. They might all be on the outs this summer.

Stevens has room to merely fine-tune the roster ahead of the 2022-23 season. Fortunately, that's all he needs to do.

For several years, Boston wondered if the Celtics would be able to break down the door of the NBA Finals after falling in the conference finals three times in five years. This core proved it can reach the pinnacle without any requisite experience.

So yes, a loss in the Finals always stings. But the way the Celtics arrived there, and even the way they lost, should provide their fan base with hope.