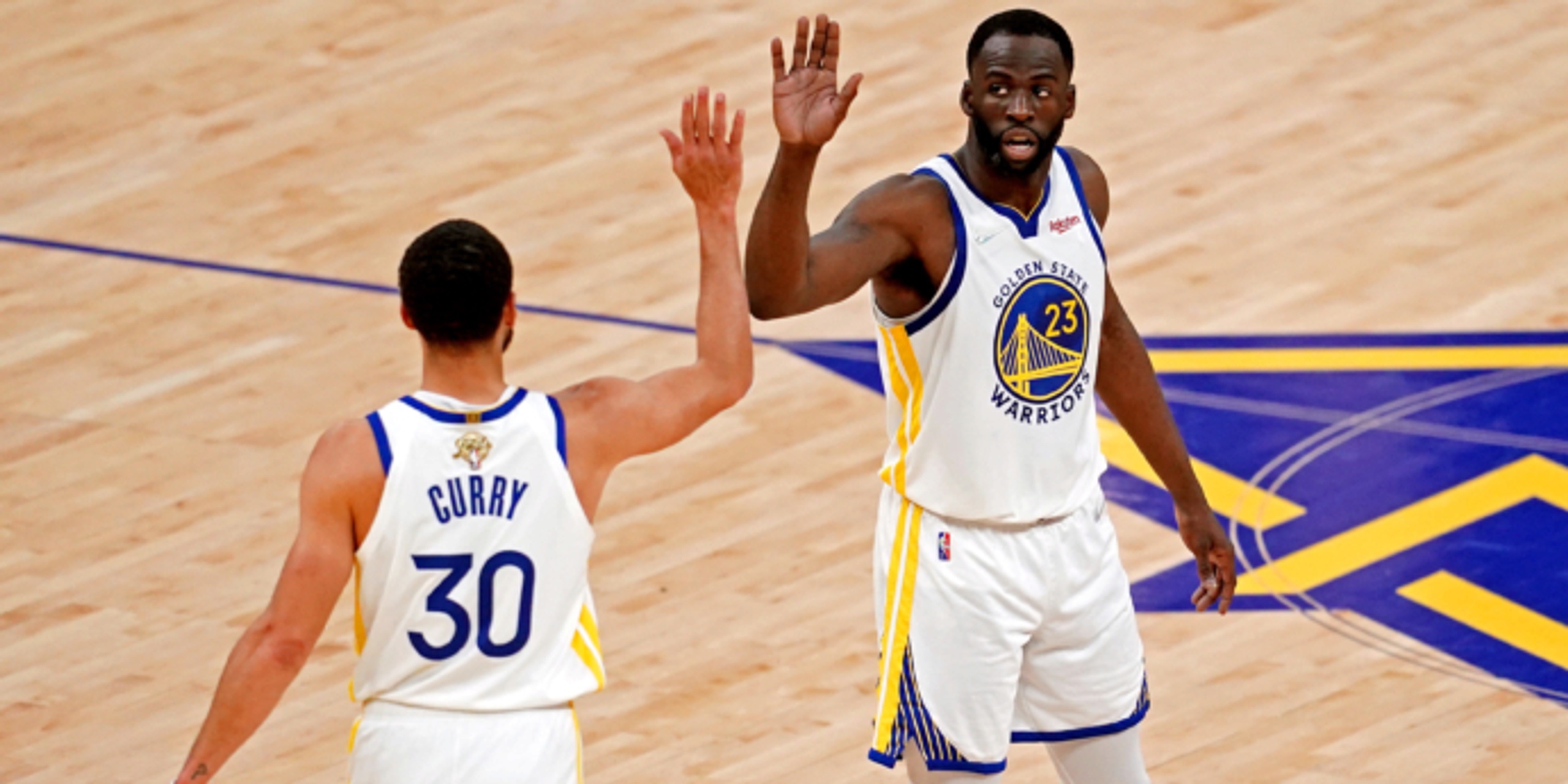 In a Game 6 overflowing with everything that stamps Stephen Curry and Draymond Green’s inevitable Hall-of-Fame futures, the Golden State Warriors’ opening offensive sequence laid the groundwork for the performances of their stars.

After an initial pick-and-pop, Curry sprung free off the ball and induced a panic from the Boston Celtics’ defense — an increasingly common occurrence as the series progressed. By no means was their defense the crux of their demise. But the mere existence of Curry, with his unrelenting motion, court-twisting aura and picturesque jumper, brought about more lapses in the later stages of the Finals.

One of those lapses was transpiring in the first minute of Game 6.

Al Horford and Marcus Smart migrated toward Andrew Wiggins. Curry found himself open, only for Jayson Tatum to stunt off Green and deter an open three. As he’s done countless times over the past eight years, Curry, with his gravity and the chaos it conjures, primed Green for a bucket.

Roughly two hours later, Curry, Green and the Warriors were NBA champions, their fourth title in eight seasons. En route to the top, both Curry and Green, in their contrasting fashions, were superb on Thursday.

I will not toss around the term “vintage” because vintage implies a relic of the past. That is not the case. They remain stars, ones who press forward as the foundation of Golden State’s dynastic presence. They are the anchors on each side of the ball, arguably the best in the league at their respective crafts.

Others may garner justified mentions, yet to consider Green the NBA’s premier defender and Curry the NBA’s foremost offensive engine is to have witnessed the past eight seasons with a detailed eye.

Thursday was a singular game amid a bountiful sample, though its events felt so emblematic of this duo’s superlatives. For their brilliance to shine so brightly as Golden State returned to basketball’s summit after a brief hiatus was the most fitting storyline available.

The scope of Curry’s persistent status as a top-five player peered through whenever possible. He rainbowed in 6-of-11 long balls, melding off-ball adventures and on-ball savvy. Relocations, stepbacks, up-fakes — the whole ensemble cast its shadow.

When Boston sent ill-equipped big men his way, he wiggled downhill for scores. Curry’s generational scoring prime begins with his unrivaled jumper, but it’s punctuated by his interior prowess.

Since 2015-16, he’s shot 55% inside the arc. He is a magical acrobat of a finisher who comfortably wades into midrange looks when the defense coaxes them. In Game 6, he drilled triples at a 55% clip and two-pointers at a 60% rate. That intersection of scoring wherever and however the scenario dictates is his grandest attribute.

You do not average 31 points on 62% True Shooting against the top-ranked defense (who sport a pair of hounding perimeter irritants) through rigidity. Curry’s offense is the antithesis of rigidity, which is precisely why he is constantly thriving.

For all the efforts various opponents made to target and exploit his defense in these playoffs, those intentions often ended in futility. Sure, Tatum, Jaylen Brown, Luka Doncic and Jalen Brunson (among others) periodically turned a profit; Curry was bested for stretches, no doubt. On the aggregate though, he continually held firm and authored a rather good defensive postseason.

That rang true in Game 6, even as Boston quickly established a blueprint involving post-ups against him. He is among the league’s sturdiest guards and seeks out opportunities of physicality.

When he waltzed into the action, whether it be at the point of attack or on the block, he crouched low, puffed his chest out and refused to be a liability with another Larry O’Brien Trophy looming.

When off-ball endeavors demanded his attention, he promptly rotated, holstering astute positioning and frenized hands. He skirted shooters off the arc with disciplined, high-handed closeouts. By the game’s conclusion, he tallied two steals, a block and the title of an ironclad defensive asset.

As Curry spearheaded the offense and blended in defensively, Green threaded the inverse balance. From the outset, he flourished wherever necessary and maintained his Game 5 excellence.

On rebounding chances, he crashed into the closest body and boxed out. If the Celtics came across a fast break, an opening to avoid the doldrums of a listless half-court brigade, there was Green to silence them. In help situations, he seamlessly pinged between ball and man, as if teleportation was the secret to his success.

One of Green’s preeminent defensive skills is his proclivity to eliminate one option and direct the event elsewhere, only to blot that out as well. He chooses Plan B for the opposition, even if it was not yet aware of that reality. They proceed under a guise of autonomy, just as he wishes.

When Boston avoided incorporating him, Green outsourced his wisdom, limbs swirling, fingers navigating traffic, voice yelling, ensuring that his signature would still be etched across the play.

His hands are always lively, prepared for a shot contest, strip, block, stunt, rebound or otherwise. You will endure the entirety of his 6-foot-6, 230-pound frame, amplified by a 7-foot-1 wingspan.

Draymond's defense was special in Game 6, even for his standards.

A full montage of his dominance: pic.twitter.com/nsQOVEJS2g

Much like dubbing Curry the greatest shooter of all-time is a factual statement that undersells his lore, referring to Green as the best defender in the NBA feels similar. He transcends his era, a great among greats, not merely among his contemporaries. I will not masquerade as an omniscient archivist of the league, but the list of defenders with loftier peaks than Green must be a rather short one.

While the offense was often a trudge-through-the-mud experience for Green in these Finals, Game 6 became his breakout. Behind 12 points on 5-for-10 shooting, he registered his first double-digit scoring appearance since Game 5 against the Dallas Mavericks — another closeout scenario in which Green dominated.

He popped home a pair of threes — his first two of the series — served out eight assists and was the metronome of Golden State’s early-offense ventures. Miss, make, live-ball turnover, dead-ball turnover, the dude was chugging down court, hoping to blitz Boston into a tizzy of gaffes.

His fifth dime was pure and quintessential Warriors ball. Green played the role of conductor, arranging everyone as he saw fit. Curry’s orbit lures his man to the half-court logo. In doing so, he clears the wing for his buddy, Klay Thompson, who zips to the rim and converts a beauty of a feed from Green.

Watching Draymond orchestrate, communicate and operate on the floor is a joy pic.twitter.com/1pijA1Trj6

The synergy, the spacing, the movement, the execution — all are tenets as to why Golden State still lords over the league seven years after this group’s first ring. The Warriors are once again champions for those reasons, concepts embodied and practiced by its two stars: Curry and Green.

They are harmonically divergent teammates who seized the moment when visions of a fourth championship crystallized in front of them. The novel of this Golden State season and era is written by them (and Thompson).

There was no more suitable way for another triumph to play out than with these all-timers captaining the ship. They are the lifeblood of Golden State whose identity cultivates through them. Thursday’s Game 6, the one that delivered a crown back to The Bay, underlined such a notion at every turn.