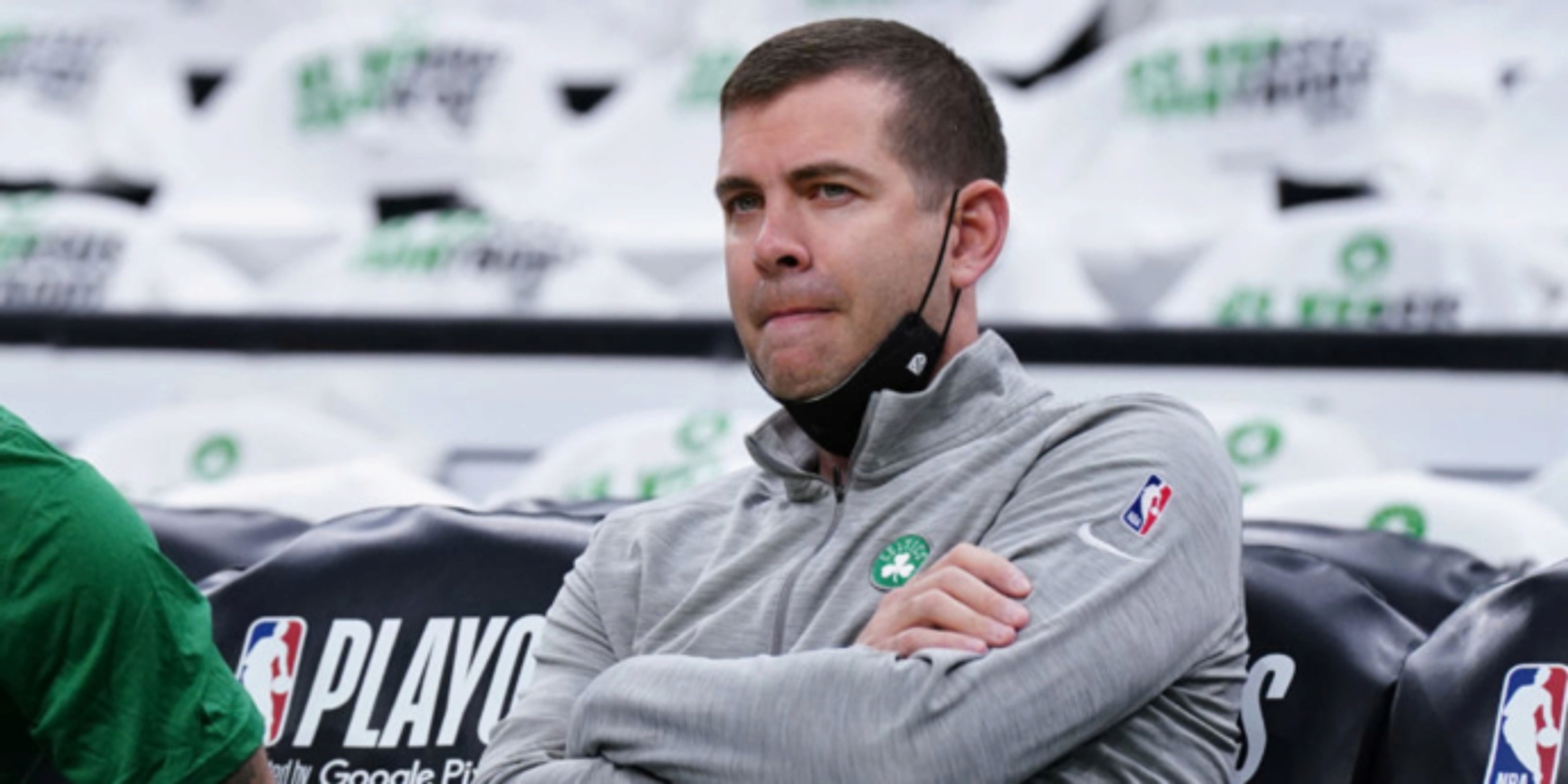 Game 1 of the 2022 NBA Finals will be played on Thursday, June 2. Remarkably, that date is the exact one-year anniversary of the Boston Celtics' announcing Brad Stevens had stepped away from head coaching duties to assume the role of president of basketball operations in place of the departing Danny Ainge.

During his eight seasons on the sidelines in Boston, Stevens was viewed as one of the league's better head coaches. He was regarded as an elite tactician and considered an important part of the Celtics' sustained success. Under his stewardship, Boston advanced to the Eastern Conference Finals three times in four years.

So when the club announced that its long-time top executive in Ainge was retiring and that Stevens would be promoted to team president last June, it came as a shock to most. Would Stevens be able to replicate the regular-season success he enjoyed as head coach? Could Boston get over the hump and advance all the way to the NBA Finals?

Although Ainge left a roster stocked with a budding superstar in Jayson Tatum, his All-Star caliber sidekick in Jaylen Brown, veteran stalwart Marcus Smart and a few promising youngsters, Stevens took control at a precarious juncture. Boston entered last summer capped out (with a directive from ownership not to incur a costly luxury tax bill) and lacking excess draft capital.

Stevens' first order of business was parting ways with Kemba Walker and his cumbersome contract. With two years and $73 million remaining on his deal, Walker was the team's highest-paid player. When healthy, the four-time All-Star Walker was highly productive on the offensive end for the C's, but his balky left knee had robbed him of his quickness. Some suggested the Celtics sit tight, hoping that an entire offseason of rest would allow Kemba to re-establish himself as a quality starter. If Boston wanted to trade Walker, Stevens would have to get creative.

The week before the 2021 NBA Draft, Stevens dealt Boston's first-round pick (16th overall) and a 2025 second-round draft pick to the Oklahoma City Thunder for Al Horford and a 2023 second-rounder.

Following the 2019-20 season, when Horford posted career-worst numbers for the Philadelphia 76ers after signing a monstrous four-year, $109 million pact, the veteran big man's contract was viewed as one of the worst in the league. In December 2020, the Sixers were forced to attach a future first-round pick and the draft rights to Vasilije Micic (who just won his second EuroLeague Final Four MVP) in a trade with OKC just to get out from under Horford's contract.

During his lone season in Oklahoma City, Horford appeared in just 28 games for the Thunder. After the trade deadline passed in February 2021, the Thunder shut him down for the rest of the season. At the time, it felt like Stevens was trading for a potentially washed-up 35-year-old center with two years and $53.5 million left on his contract ($41 million of it guaranteed).

But after struggling at times to find his groove in the regular season, Horford has been a crucial cog in the Celtics' run to the Finals. During these playoffs, he is averaging 11.9 points, 9.6 rebounds, 3.5 assists, 1.9 three-pointers,1.6 blocks and 0.9 steals per game, all while shooting 50.0% from the floor, a scorching 43.2% from downtown, and 83.3% from the free-throw line.

To say the Walker/Horford trade has worked out well for Boston would be a dramatic understatement.

After acquiring Horford, Stevens' next critical decision would be choosing a new head coach. After interviewing several candidates, Stevens zeroed in on Ime Udoka and officially hired him in late June. Udoka was a bit of a gamble, as he had never been a head coach, having spent the previous nine seasons as an assistant with San Antonio (2012-13 to 2018-19), Philadelphia (2019-20) and Brooklyn (2020-21).

Udoka's job was made that much more difficult when the C's stumbled out of the gates this season. By the turn of the new year, there was some finger-pointing in the locker room with the Celtics losing too many winnable games. Three weeks into January, Boston was still below .500 with a 23-24 record.

However, Udoka remained stoically stern, providing a calm and reassuring presence in the locker room and on the sideline. His ability to outcoach opponents and his command of the X's and O's gained him the trust of his team. Over the second half of the season, Boston ranked in the top three in Defensive Efficiency, and led the league in Offensive Efficiency (122.6) and Net Rating (plus-12.7) by a wide margin.

Udoka earned Coach of the Month honors on multiple occasions, and would go on to finish fourth in the NBA Coach of the Year voting. The league-wide respect he's garnered has only increased as he's helped guide his team to the championship series.

When the free agency frenzy commenced in July 2021, Stevens had to decide what to do with shooting guard Evan Fournier. Ultimately, Boston opted to let Fournier leave for New York.

The Smart signing, in particular, looks genius in retrospect.

It had been rumored that Ainge was seriously considering trading away Smart in different deals in years past. However, Stevens made it clear that he was committing to Smart for the long term. Just as importantly, Stevens let it be known he would entrust Smart with the team's primary point guard duties. This may seem like an easy decision with the benefit of hindsight, but it's important to point out that entering this season, Smart had started in just 228 of the 449 games he had appeared in. And a large percentage of those starts were alongside point guards such as Kemba Walker, Kyrie Irving and Isaiah Thomas.

The C's flourished with Smart installed as the floor general, especially on the defensive end. Smart, as we know, would be named NBA Defensive Player of the Year, becoming the first guard to win the award since Gary Payton in 1996.

Starting in each of the 71 regular-season games he played, Smart finished the season ranked seventh in the NBA in steals per game (1.68), ranked fifth among all guards with a Defensive Rating of 105.2, and led the NBA with 1.1 loose balls recovered per contest. He was also near the top of the league in deflections, charges drawn and defensive rebounds. On the offensive end, he averaged a career-high 5.9 assists per game and posted an Effective Field Goal percentage above 50% for the first time.

Had Stevens not locked up Smart last summer, he would undoubtedly have been one of the most highly sought-after players on the free-agent market next month.

In February, Stevens recognized Boston's backcourt needed an upgrade. Hence, he sent Josh Richardson and Romeo Langford and a top-four-protected 2022 first-round pick to the San Antonio Spurs in exchange for Derrick White at the trade deadline. Udoka, who was familiar with White having spent time as an assistant in San Antonio, asked him to sacrifice some of his offense. White would serve as a reserve, which meant fewer field goal attempts and fewer minutes. White embraced the role, supplied solid defense on the perimeter and knocked down a handful of big buckets during Boston's run to the Finals.

Ironically, of all the trades and signing Stevens has made over the past 12 months, arguably the most important and impactful are the ones he did NOT agree to. It sounds outlandish now because the C's are four wins away from the franchise's 18th championship, but plenty of pundits and fans in New England had been calling for the Celtics to break up the duo of Brown and Tatum.

While there was no denying their collective talent, many argued the roster was unbalanced, and that the skill sets Tatum and Brown brought to the table were a bit duplicitous. Thus, some folks contended that the best path forward was trading Brown (possibly in a package with Smart) for a pure point guard (such as Damian Lillard).

Pressure and the corresponding rumors reached a fever pitch in the dark days of December and January.

Damnit I’m holding everybody in Boston accountable, from the front office, to the coaching staff and down to Jaylen and Tatum. It’s time to break them up! Carry on… @FirstTake pic.twitter.com/2fNHMFavfd

As noted above, Boston was below .500 for much of the season. On Jan. 15, the Celtics had a worse record than both the Knicks and Washington Wizards. Boston was 11th in the East, on the outside of the Play-in Tournament looking in.

But Stevens never budged, trusting in the roster he helped construct. And the results speak for themselves. Twelve months after he was hired, Stevens's squad is preparing for the NBA Finals.

Earlier this month, the NBA announced Memphis Grizzlies General Manager Zach Kleiman as the winner of the 2021-22 Basketball Executive of the Year Award. Stevens came in sixth, receiving only one first-place vote. However, that award is based on regular-season accomplishments.

Given how well Boston has performed in the playoffs, there is little doubt about which executive's moves have looked best in the postseason.