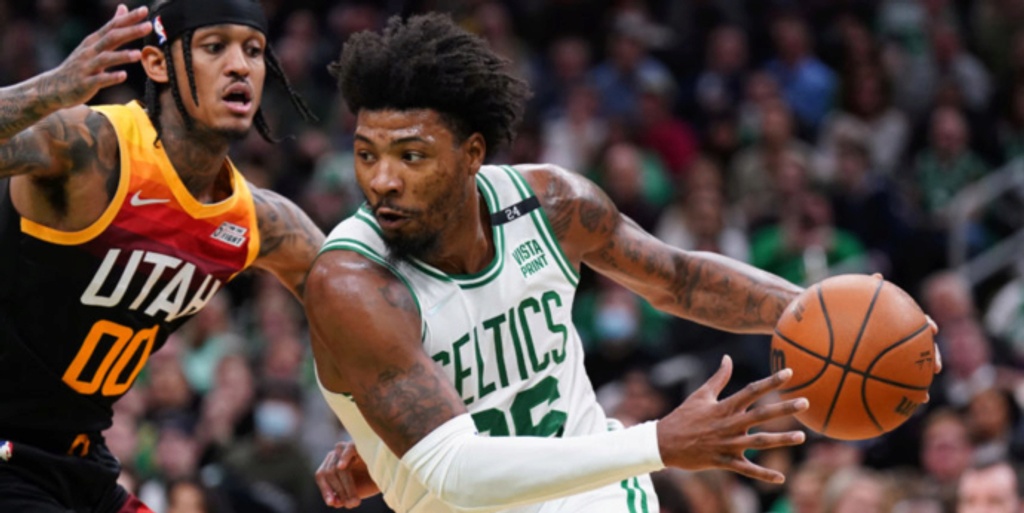 During the Boston Celtics’ 125-97 walloping of the Utah Jazz on March 23, Marcus Smart attempted just one shot in the first period, yet played one of the best individual quarters I’ve seen outside of a top-15 player this season.

Across his 12-minute, first-quarter stint, the 28-year-old handed out nine dimes, drilled a triple, forced two turnovers and detonated at least two more possessions defensively. Amid a game with five different All-Stars, Smart was its best player through 12 minutes. By the end of the opening frame, Boston held a 39-24 lead over the NBA’s top offense and cruised to victory, fueled by a season-high 35 assists.

The win marked the Celtics’ 21st victory in 24 tries since Jan. 29. Despite losing two of their last three games, they’re now 47-30 after beginning the year 25-25. A bevy of factors have powered this team’s turnaround, one of which is Smart enjoying the best stretch of his career and it’s been facilitated by a shift in his offensive role for the betterment of everyone.

All the while, his savvy connective passing continues to flourish, thanks to his instantaneous, purposeful decision-making when the ball swings his direction. He’s a daring, frugal distributor, illuminated in part by his 2.6:1 assist-to-turnover ratio. That metric never captures the whole passing picture, but it's a useful snapshot for him.

By embracing Smart as the primary point guard that people have long stressed as the missing ingredient of Boston’s offense, a once-stale attack sits third in offensive rating (118.9) over the past 27 games. Prior to that, the Celtics were 22nd (109.1 offensive rating), buried by poor and poor execution. Neither really hampers this team anymore; although, the ramifications of Robert Williams’ absence have yet to be fully experienced.

As a pick-and-roll conductor, Smart is wily and patient, though rarely timid. He excels at table-setting for big men and has formed a particularly collaborative connection with Williams. According to Synergy, he only ranks in the 22nd percentile in pick-and-roll scoring this year. Add passes into the equation, however, and he vaults to the 75th percentile.

Tatum’s scoring gravity may open up more lucrative reads than Smart’s does, but Smart is probably the team’s most talented passer among its perimeter options. Balancing that duo’s opportunities to commandeer ball-screens is broadening Boston’s playmaking diversity and Smart is taking advantage of these chances.

Among Smart, Tatum and Brown, Smart is the least adept play-finisher. Having Tatum (and Brown, to a lesser extent) be the catalyst for so many actions early in the year suppressed some of Smart’s offensive value and complicated Tatum’s job. It’s not that Tatum cannot create for himself at a high level, it’s that he’s also practical as an off-ball player and Smart is adroit on the ball. Limiting those chances provides diminishing returns for both (well, all three players) offensively.

The Smart-Tatum pick-and-pop has been highly prosperous for the Celtics and they’ve expanded its usage during this run. With so many teams switching on defense this season, the 6-foot-8 Tatum screening for the 6-foot-3 Smart enacts beneficial mismatches for the star wing, empowering him to easily shoot over the top or attack downhill to exploit a size advantage.

With Brown, his off-ball usage generally revolves around cuts from the corners or curling around a pindown from Williams. Both talented wings are displaying their off-ball chops much more commonly the last couple months and they can do so because Smart is such a trustworthy facilitator.

Tatum has especially thrived from Smart’s amended usage, with 51% of his buckets coming via assists since Jan. 29, a notable leap from 43% before that, according to Cleaning The Glass. Similarly, his season-long TS% has risen from 54.5 to 57.7 over his past 26 games.

Whether it’s sealing off smaller defenders inside amid early offense, flowing off flare screens into side pick-and-rolls or cutting from the perimeter, he’s catching the ball on the move more often and encountering simpler scoring looks.

Smart is also excellent when operating as a screener for Tatum. Boston has increasingly frequented that gambit to further unlock the superstar’s resurgence and augment the entire offense. He’ll create on the short roll or attack from the perimeter, and he’s also netted a credible 37.7% of his 114 catch-and-shoot treys over this span.

Players who thrive off the advantages that a primary initiator fashions are crucial for any threatening offense. Smart fits that criteria because he’s a sound decision-maker and gifted passer. When opponents toss two dudes at the ball against Tatum, Smart is a wonderful release valve who punishes the defensive tactic.

Even if Smart isn’t the one punctuating a play, he can spark similar mismatches to the ones arising when Tatum screens for him. Either way, this action has been integral to Boston’s 180 offensively.

From ball-handler to screener to play-linker, there are simply an array of contexts Smart can be relied upon to execute favorable decisions. While it took a while for the Celtics to truly lean into that, it’s occurred over the past two months and yielded sterling outcomes.

Smart is playing better than ever. Tatum moved out of his slump and resembles a dominant top-10 player again (positive shooting regression helps too). Brown’s versatile secondary scoring is prominently on display.

Ball movement isn’t a necessity for effective offense, but the Celtics aren’t loaded with high-level creators, so it's certainly tied to their success. Once they get the defense into scramble mode, they’ve been dynamite at maintaining that advantage with prompt passing to produce a worthwhile shot. Smart’s rapid, shrewd facilitating feels like it sets the tone for those sequences and this team-wide development (in fairness, Boston rosters many good passers in its rotation).

Everyone rightfully discusses Smart’s defensive credentials when extolling his virtues. He’s earned an All-Defensive First Team bidthis season and has a viable case for Defensive Player of the Year.

But his on-court value extends well beyond being elite on one side of the ball. As Boston has remade itself into a legitimate title contender, his offensive contributions and reshaped role are glimmering — just as he did during a masterful first quarter against the Jazz last week.