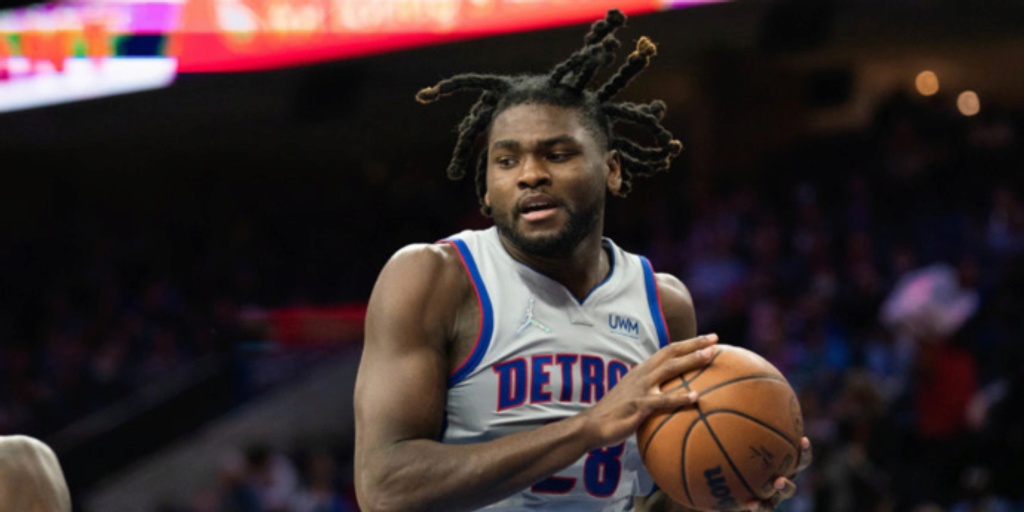 It all began as a regular box out off of a free throw by Jerami Grant.

In the third quarter of Sunday’s game between the Los Angeles Lakers and Detroit Pistons, LeBron James and Isaiah Stewart got into it. A combination of LeBron's elbow and fist plunged into Stewart's face, and blood began streaming out of the Detroit big man like a faucet.

Stewart then repeatedly charged after LeBron, and had to be restrained multiple times by players, coaches, trainers, ball boys and "kind of" security (if you review the tape, you’ll see why I said kind of). But for a moment, it looked like the NBA may have been well on its way to a near melee like one we haven’t seen in a long time.

Having heard commentator after commentator on sports talk radio stations bashing Stewart and using descriptive phrases as if he is a complete menace to the NBA, I wanted to reach out to someone who knows him personally and can speak directly to his character. So I contacted his Washington Huskies head coach Mike Hopkins to discuss Stewart's true self.

Below is our brief conversation on Stewart.

Etan Thomas: Coach Hop, thanks for taking the time to talk to me.

Mike Hopkins: No problem. As soon as I got your text and you told me what you wanted to do, I wanted to call you right back. Thanks a lot for doing this.

Etan Thomas: No problem. So first, tell me the Isaiah Stewart that you know and coached — not just as a player, but as a person.

Mike Hopkins: I would say in all the years that I've ever coached, I don't know if I've ever coached somebody that's all about the right stuff. We always use the term, "He's built right." How would that be defined? High character, lives his truth, high integrity, great teammate, all about the team, and he treats others to the highest level. It's all about respect. And I was telling you earlier about how my wife said of all the years that we've been around basketball — Syracuse, pros, everything like that — she's never met anybody like Isaiah. Someone that just cares about others. Someone who's all about the right stuff.

Etan Thomas: And he's being a little bit vilified right now after the incident with LeBron. And my worry is that one moment can define a person's entire career. And I don't want that to happen to him because I've heard so many positive things about him. Would you agree that everyone shouldn't just let one moment determine how they view him for the rest of his days?

Mike Hopkins: Definitely. And I think the biggest thing is everything with Isaiah is about respect. And I felt like watching the replay over and over again, it was an act of disrespect. And sometimes, if anybody's ever been disrespected or felt slighted, or has had a moment where they've maybe just got a little bit angry or showed a little bit of rage... But at the end of the day, he's all about the right stuff. And anybody who knows him, you will walk away saying, "That's the greatest kid I've ever been around." And I guarantee if you have 99% of people, if that happened to them, [they] might have had the same reaction. But in the moment, it's a little bit different. I'm sure Isaiah, when he was able to sit down and relax a little bit, get his thoughts — it's one of those things where he would probably say that he wouldn't have done that.

Etan Thomas: And he plays with passion. And like you mentioned earlier, we have a little bit of similarities, me and him, and some other people have told me that as well — the nicest kid off the court, but plays with this tremendous passion on the court. And that's a good thing. That's what you want out of a player as a coach, right?

Mike Hopkins: Absolutely, He's all about the right stuff. If you say, "Isaiah, I need you to do this." He's going to do it. And like you said, he plays with such tremendous passion. He plays with a motor. He plays with a desire. He was the kid that if he was rated 80th as a freshman and he played against a top guy, it was all about what actions were needed for him to be able to go up in the rankings or to show people that he was really good. If it was a 1-on-1 challenge, it was all about, "How can I stop this guy?" And his studies, if it's academically, he always did his best; he always wanted to make sure he got his best grades possible. If it was his health, he had bottles, the gallon of water, making sure he is getting enough sleep. It's all about the right stuff, Etan. And that's where I go back to he's so much like you, like his character and what he stands for. He lives the truth and [has] integrity. That is so authentic and real. And that's what makes him special.

Etan Thomas: I heard some commentators speculating that something must have happened earlier for LeBron to react like that, and I was like, "Why are y’all speculating if you didn’t actually see anything?" It’s like they were going out of their way to point the finger at Isaiah Stewart.

Mike Hopkins: Listen, Isaiah Stewart is not the guy who is going to cheap shot you the whole game or trying to punk someone or be an irritant to the point that they blow up and react, that’s just not him. He’s the kid who plays the right way, and plays hard [with a] respectable, physical style. You battle with him the entire game, and then, he comes and gives you a hug afterwards like, "That was a great battle." But here, he was hit in the face to the point [that] blood was pouring down. I’m sure that many people want a reaction that he goes to LeBron and bows to the King. I get it. But the reality is, in the moment, if you take a lot of pride and respect in who you are, how you treat people, and somebody does that to you, and that’s something you value...

Etan Thomas: Yeah, a lot of people are saying, "Well, he should’ve done the professional thing and kept his cool and been the perfect role model for little children," and all that stuff they say when the demographic is not of hockey or baseball. We don’t have to get into all of that now, but they want him to be an emotionless robot. I didn’t expect him not to get any type of punishment, but I just don’t want his entire character to be denigrated and tarnished to the point where he has a red flag on him for the rest of his days.

Mike Hopkins: No, I understand. But yes you’re 100% right, this one incident should definitely not define him. You’re 100% correct.

Mike Hopkins: I would just tell them that's not a true indication or definition of who Isaiah Stewart is. If you get a chance to know him and what he is about, he's all of about the right stuff. And looking at the replays over and over, that's not who he is. He was a kid that he felt, in my opinion — not talking to him — that it was a form of disrespect and he lost it a little bit. But he is definitely not someone that tries to hurt anybody or represent a wrong way. He's all about caring about others. He's always about picking up others. He's about giving back to his community and the people that have been around him. He's ultra loyal. And like I said, it's all about respect with him. That’s what it’s all about, respect.