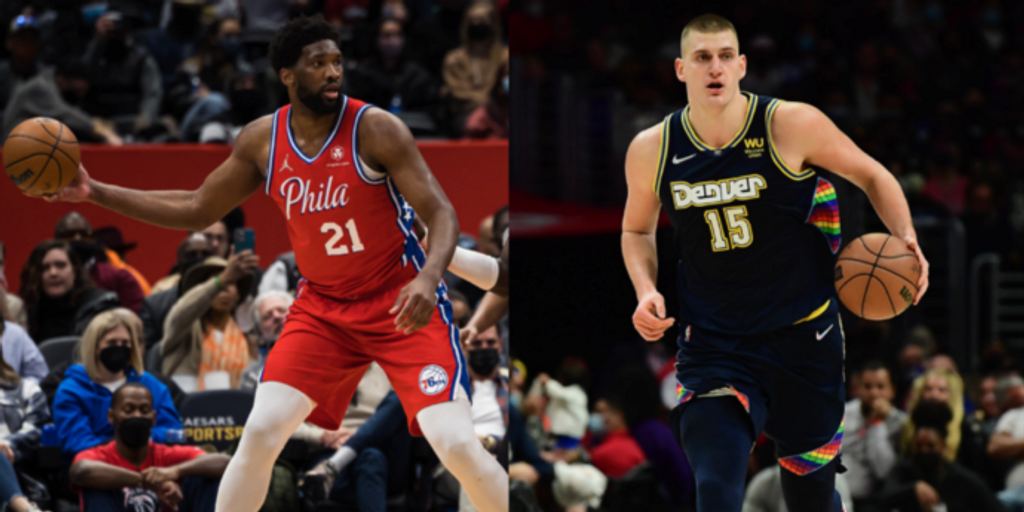 If you’ve ever seen "Chinatown," you know, if you’re cool, that life is hopelessly cyclical and humans are bound to repeat their actions until the end of time. One could argue that basketball reflects the state of society. That could be a different article for another day, but this observation is especially true when discussing the recurring nature of its trends.

For instance, before the termination of illegal defense rules, the game was largely dominated by the dinosaurs stomping around in the paint. And now, after two decades of two-way wings and supernova offensive guards, the league looks to be circling back to its past ways.

Two players at the forefront of this resurgence are Joel Embiid and Nikola Jokic. There’s little doubt that these two titans are the two best centers in basketball, but has the latest cycle of this infinite time loop produced the best of the genre? Are Jokic and Embiid in the midst of the best center seasons that the league has ever seen?

To find out, we'll take a statistical deep dive and see how their numbers compare to the best peak seasons from other centers in the modern era. (Note: For the sake of this exercise, peak seasons are determined by the year a player posted their highest Box Plus-Minus (BPM) score.)

There is a lot to unpack here. First off, for the sake of avoiding falling into the dreaded slippery slope trap, I only included players listed as a “center” on Basketball-Reference, so that means no Tim Duncan, Kevin Garnett or Giannis Antetokounmpo. Also, you may notice the absence of the legendary triumvirate of ancient big men (Wilt Chamberlain, Bill Russell and Kareem Abdul-Jabbar). The reason for their omission is that they all posted their best seasons pre-merger, and I couldn’t find enough reliable data for that time to make an honest apples-to-apples comparison, so I will only be including bigs who peaked post-1980.

The points per possession average provided here is inflation-adjusted to an average team Offensive Rating of 110 to account for the gradual increase in overall offensive efficiency over time. For example, the league-wide offensive efficiency was 104.7 in 1982-83 compared to 109.9 in 2021-22.

To capture playmaking/passing value, I have also included some of Ben Taylor’s playmaking measures. Passer Rating (a 1-to-10 grade of a player's passing ability, with “4” generally being considered an impactful score for big men) and Box Creation (an estimation of open shots created for teammates per 100 possessions).

One thing you'll notice is that Embiid and Jokic are lapping the field in Box Creation. This isn’t necessarily because they are vastly superior playmakers (although, Jokic probably is), but more so a result of the massive eruption in floor-spacing sparked by Mike D’Antoni’s “Seven Seconds or Less” Phoenix Suns. Inversely, the analytics push towards sacrificing offensive rebounds to focus on transition defense has led to decreased offensive-rebounding percentages (ORB%) for modern-day big men (it also doesn’t help that they are going up against the Chairman of the Boards himself).

To compensate for the stylistic differences of each era, I also included a chart showing where each of these players ranked among the other centers in the league during that time. (Note: To qualify, the center had to have played at least 40% of his team's minutes that season).

Looking at the data, it appears Jokic and Embiid’s individual splendor serves as a bit of hindrance to their cases. If not for the greatness of the other, one of them could theoretically be leading all centers in four of these offensive statistical categories this season. However, it’s also not uncommon for two all-time great players of the same position to peak simultaneously (i.e., Patrick Ewing and David Robinson).

Speaking of the categories, if we measure greatness based on first-place finishes, Robinson would be leading this group with five first-place finishes in these seven statistical categories. But it’s also important that we take into account the context of these stats. Robinson was notorious for juicing his numbers in the regular season against weaker defenses and then falling off a bit in the playoffs when matched up against stronger opponents. Except for Passer Rating and ORB%, all of The Admiral's offensive stats decreased from the regular season to the postseason. Meanwhile, all of Shaquille O'Neal's numbers from the chart increased or stayed relatively constant in the 1999-2000 postseason.

Jokic and Embiid's scoring and playmaking numbers hold up with just about anyone, but we don't have the luxury of seeing how those numbers will hold up in the postseason just yet.

The defense was obviously a lot harder to capture here. I included the usual suspects: Blocks (BLK%), steals (STL%), and defensive-rebounding percentage (DRB%). I also compared their Defensive Box Plus-Minus (DBPM) scores because – despite the known problems with these types of metrics – a majority of great defensive centers do still manage to score well in those stats. Lastly, I included their team’s Defensive Rating (DRTG) during their peak season because, historically, centers have the largest footprint of any player on that end of the floor.

At a glance, the one player who stands out the most here isn’t Jokic, or Embiid even. It’s Hakeem Olajuwon. He puts up the highest marks in DBPM, STL% and BLK% of any of these players in their peak seasons. Also, Olajuwon is the only one to finish top-five in all five categories. The fact he anchored a top-five defense in 1992-93 is especially impressive considering his infamously lackluster supporting cast on that end of the floor. And, it’s also worth mentioning that this statistical evaluation is in line with my analysis during "The Quest for the Best," where I called him the greatest post-merger defensive big man.

The numbers suggest that Embiid and Jokic rank among the most prolific offensive powerhouses the position has ever seen, with Jokic himself having a rock-solid case as the GOAT offensive center. However, neither big man appears to have the defensive standing necessary or playoff sample size to conclude beyond a reasonable doubt that either one is having the single greatest season from a center since the merger.

Still, after years of Dwight Howard superman capes and Andrew Bynum All-Star nominations, it’s a welcome sight seeing two centers occupy top spots among the league's best and brightest. And the fact that they're younger than/the same age as all those guys were when they peaked means that there is still plenty of time for leapfrogging in the big man pantheon.