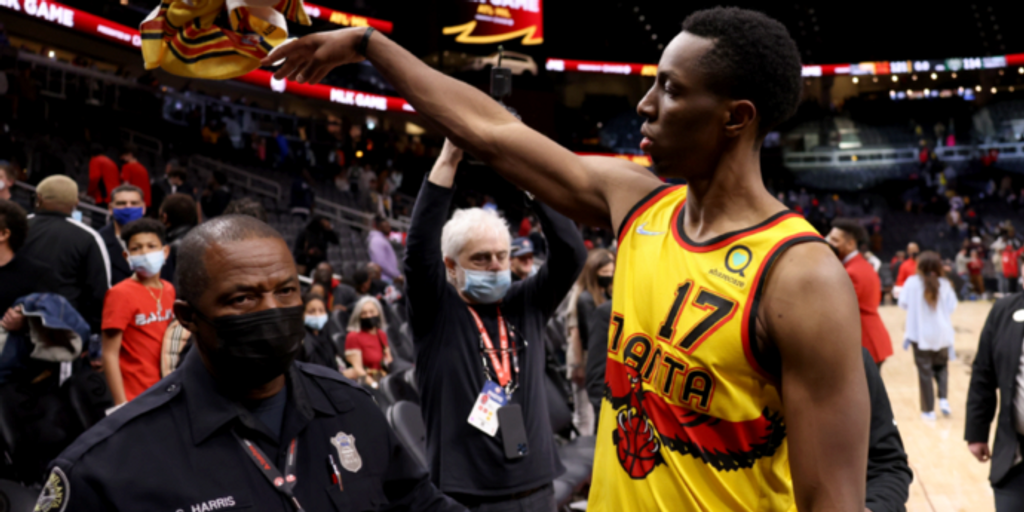 Is Onyeka Okongwu ready for more with the Hawks?

It barely takes 40 seconds for Onyeka Okongwu to pop on Monday night's film.

The Atlanta Hawks kick off their opening set after forcing a Khris Middleton miss on the other end. De'Andre Hunter "ghosts" a screen for Trae Young before receiving a pass. Hunter then hands it off to Kevin Huerter as he lifts from the left wing.

The ball is pitched to Okongwu in the middle of the floor. From there, the action is supposed to flow into a quick-hitting two-man game between him and Young, with Okongwu rolling to the side with the Hawks' best shooters. In other words: the Bucks would have to choose between tagging Okongwu on the roll, or staying at home to prevent a mostly open triple.

But George Hill blows it up.

The Hawks are forced into improv mode thanks to Hill's ball denial. Okongwu looks towards John Collins, who rebuffs him quickly. Go to the other side!

And so he does, opting to toss to — and later screen for — Huerter. The Bucks send two to the ball, as they've done all year. Huerter hits Okongwu on the roll, and the USC protege fires that sucker to the corner in a snap.

Collins misses the three, but you take that process — that quick process — 10 out of 10 times. That short-roll juice — he's the best (on-the-move) passer in Atlanta's big-man room — is a necessary complement to Atlanta's ball-handlers. A necessary counter to aggressive defenses like Milwaukee's.

Okongwu would go on to have one heck of a game. The statline of his fourth start of the season was cool: 12 points, 8 rebounds (4 offensive), 3 assists, 3 blocks and a steal. The "how" of those numbers were impressive.

Of his six made field goals, we saw him catch lobs, score off of rebounds and make his own breakfast from the dunker spot. (Editor's Note: Subscribe!) Okongwu's spatial awareness, activity and plus-touch in the paint makes him a solid bail-out option.

This is the quintessential Okongwu possession. A good screen with a quick flip of the hips and constant-but-calculated movement as the action continues.

Again, it's hard not to be excited about his passing on the short roll. He maps out the floor well and makes quick decisions with the ball. There's some manipulation present, even if it isn't Jokic-level.

It's simple, but I love the extra dribble here. As part of the Bucks' aggressive scheme, Giannis Antetokounmpo is tasked with splitting the difference (playing between two players) on the weak side of this pick-and-roll. Okongwu's dribble forces Giannis to make a choice — he takes away the corner pass — before immediately picking out the open man (Collins).

And speaking of Giannis: Boy, did he have a tough time dealing with Okongwu.

The flashy stats are there; three blocks and a steal are nothing to sneeze at, and all but one of those came against Giannis. But even in those instances, you got to see the defensive versatility he provides.

If you're keeping track at home, you just saw:

And that's just the flashy stuff. You're not making much on Top Shot Moments of Okongwu playing the gap in drop or ICE coverage, or contesting jumpers after late/peel switches. That doesn't make his ability to do so any less important than it is.

Consider this: the Bucks generated 0.75 points per possession on trips featuring a ball-screen defended by Okongwu, per Second Spectrum. That number dropped to 0.5 in the second half, where the Bucks kept involving Giannis as a screener and ultimately failing to create easy looks.

We're now four starts into the Okongwu Experience this season. His averages aren't too far off of what he put up against the Bucks on Monday: 10.0 points, 8.3 rebounds, 2.3 assists, 0.8 steals and 1.8 blocks.

The Hawks selected him to be their center of the future last season; with play like this, combined with the step back that Clint Capela has taken this season, the future may turn into the present very soon.

It probably isn't time for the full shift yet though. As dynamic as Okongwu is defensively, there are some size-and-strength concerns that haven't been fully fleshed out yet. He still fouls quite a bit; he commited five last night (four against Giannis), and his 5.8 fouls per 36 minutes is not the kind of rate you want to see from a primary rim-protector.

But as he gets stronger and more disciplined, he'll be able to handle more of a workload. That'll give him more time to build chemistry with Young on the other end; the sample is small, but the Hawks are generating over 1.1 points per possession on trips featuring a Young-Okongwu pick-and-roll.

In a season filled with disappointment for the Hawks, Okongwu's play has been a much-needed bright spot.