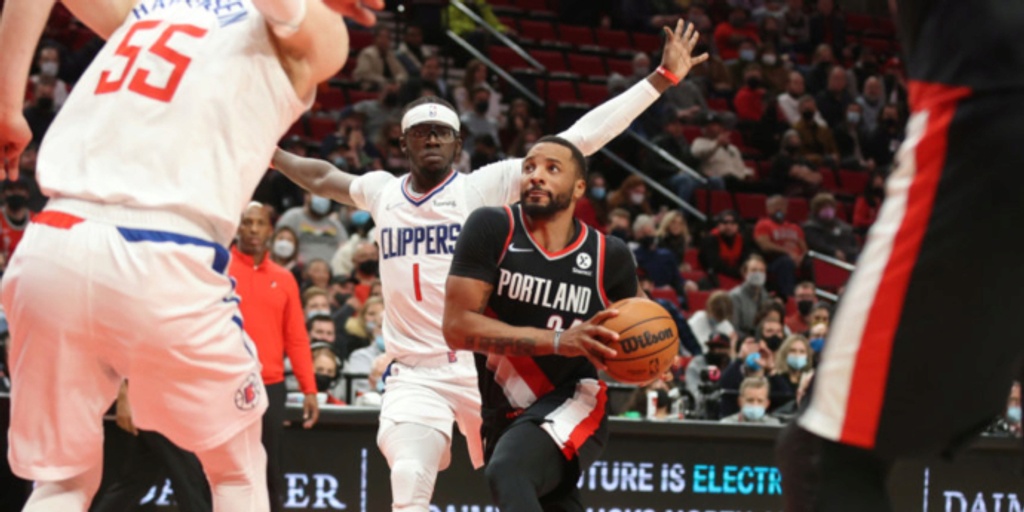 Breaking down why the Blazers-Clippers deal works for both sides

And here’s the first pair of Mentos thrown in the Coke bottle that’ll set off the rest of the league.

The trade deadline isn’t until February 10 but, as usual, teams are already completing deals. In this case, per ESPN’s Adrian Wojnarowski, the Los Angeles Clippers are sending over a package led by Eric Bledsoe and Justise Winslow to the Portland Trail Blazers in exchange for Norman Powell and Robert Covington.

As of this trade, the Blazers are 21-31, 10th in the Western Conference, and still without Damian Lillard for at least a few more weeks. The Clippers, even without Paul George and Kawhi Leonard — neither of whom are guaranteed to return this season — are 27-27 and eighth in the West behind the leadership of head coach Tyronn Lue.

If you recall — and, well, how could you not — the Clippers completed a 36-point comeback against Portland East, a.k.a., the Washington Wizards, one of three comebacks of at least 24 points or more in a two-week span. That in itself is a feat reached by the Clippers and no one else in the last 25 years.

ESPN’s Bobby Marks lays out the contractual mechanics. This is important — otherwise, you’d think the Clippers just jacked the Blazers, but that’s not fully true. (We’ll get to that later.)

Here are the contracts:

The Clippers conceptually “win” the trade from the standpoint of fielding a better roster. Powell’s been the Blazers third-leading scorer this season wiith Lillard and CJ McCollum out for extended periods, and the No. 1 option on numerous nights as a result. Powell extended with Portland over the summer for five years and $90 million, but it’s an ascending contract that won’t land him a salary north of $20 million until the last year of the deal. Powell gives the Clippers a No. 3 or even No. 4, ideally next to Leonard and George at some point, who can score efficiently and at-will in different facets of the game.

In Portland, Powell averaged 18.7 points on 46/41/80 shooting splits and just 13.6 field goals per game. His field goal attempts are slightly over Anfernee Simons’ 12.9 attempts per contest, though he only averages 14.6 points by comparison — despite also shooting an efficient line, 44/40/90. Why the difference? Powell not only gets to the line five times per game, second only to Lillard on the team, but his .365 free-throw rate leads all non-centers on the roster. Additionally, Powell’s been a quality pull-up shooter, ranking 16th in scoring efficiency, shooting with an Effective Field Goal percentage of 64% in spot-up situations and 56% in transition, according to Synergy.

All of which are great signs if you’re 6-foot-3, which you can’t say that often in this league.

Moreover, adding Powell removes the offensive strain on other Clippers, like Reggie Jackson, Marcus Morris and the emerging Luke Kennard especially — making them more potent on that end and, ideally, not putting them in positions where 24-point comebacks are all that necessary.

In theory, Covington will play a role on the Clippers, assuming he remains on the team, but it feels more like short-term insurance. And there’s nothing wrong with that, but let’s spell it out. Covington is on an expiring $13 million contract and will dive into unrestricted free agency in a few months. Positionally, as a theoretical stretch-four/three-and-D-wing, he has some duplication for this Clippers roster, mainly George, Leonard, Morris and Nicolas Batum.

Covington’s statistically having his worst season since entering the league full-time, throwing out the seven games he played as a rookie in 2012-13. In 30 minutes per contest, and 40 starts in 48 appearances, Covington’s averaging 7.6 points, 5.7 rebounds, 1.5 steals and 1.3 blocks per game, shooting 38/34/83, and while the free-throw percentage is high, he’s only taken 36 this season, and hasn’t cracked 150 since 2016-17. Covington will split time with and see the floor beside other Clipper forwards, and just being on a better team with a better coach should help settle his role.

Let’s also acknowledge that Covington could also be a part of this deal because the Clippers may move Morris and or Batum within the next few days. (Take it from me, Miami Heat fans are already trying to figure out how to get one of them. If the Clippers like Duncan Robinson – for Morris in particular – maybe they’re in luck.) That’d open things up for Covington, and Powell would replenish the scoring, albeit differently.

From a basketball perspective, the Blazers portion doesn’t need an extensive breakdown, at least not on this piece — trust me, fam. Hell, the move itself isn’t about their play as much as it is cap mechanics. But in summation, it isn’t as bad as some tweeters are pondering, depending on what follows.

As Marks outlined earlier, around 20% of Bledsoe’s $19.4 million salary next season is guaranteed, so the Blazers could easily move on from him. Winslow is only due $4 million next season, and Keon Johnson was just picked in the first-round, so he’ll be cheap (by NBA standards) through 2025, assuming all his options are picked up. He’s played 135 total minutes this season and won’t turn 20 for another month, so we’ll call him a project.

The move also places Portland under the luxury tax, per Marks, and it also creates a $6.5 million trade exception.

The trade will put Portland under the luxury tax.

The big question around Portland is, obviously, what happens to Lillard. Question No. 1A is McCollum, but freeing Powell’s salary and adding a trade exception aids the mechanics of making future moves. The Blazers have short-term contracts to use — hell, they could even re-route Bledsoe’s $18.1 million this season if they wanted, or keep him on the books to use after the season since his deal won’t be fully guaranteed until four days after the July moratorium.

Jusuf Nurkić at $12 million and Larry Nance Jr. at $10.6 million are also usable deals in trades to monitor, along with several draft picks. So, for Portland, this trade is about what’s next more than anything else. Maybe we’ll look back and say they got the shaft at some point, but it’s too early to make that judgment. To some degree, it may be for the Clippers as well, but they’re clearly trying to be competitive now, and this should help them get there.

These are two franchises going in different directions. The Clippers, if they get healthy before the playoffs, should be taken seriously as a contender, especially because there’s a world where they get to the NBA Finals last season if Leonard doesn’t tear his ACL in the postseason. For the Blazers, I mean … we’ll see.