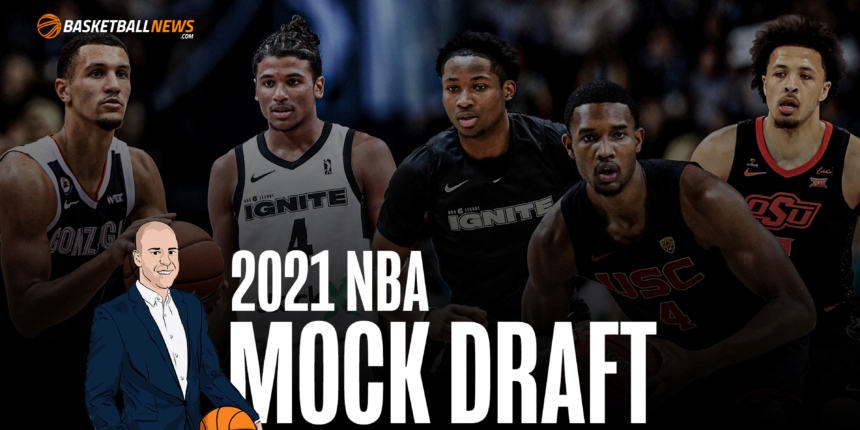 The 2021 NBA Draft will be held on July 29, 2021, which means it's just 15 days away. Our NBA Draft analyst Matt Babcock went through a number of picks with the highest upside and the most potential.

With the 2021 NBA Draft just weeks away, most of our scouting work has already been completed. After recently updating our 2021 NBA Mock Draft, I’d like to highlight some of the prospects that we think possess the most potential and upside in the entire draft this year:

Bottom Line: Standing 7-feet tall with a 7-foot-4 wingspan, while also being a fluid athlete, Evan Mobley utilizes his unique combination of length and mobility to be an elite rim protector. He has also shown flashes of being an effective passer and outside shooter. Overall, it’s rare to find players with his size, skill and athleticism, making him a special prospect. Depending on what the Detroit Pistons value, he could be in contention for the No. 1 pick.

Bottom Line: Although known mostly as a high-flyer, Jalen Green showed a more versatile offensive repertoire this past season for the G League Ignite. His explosiveness and ability to create space off the dribble, along with his improved outside shooting, have made him one of the most coveted prospects this year. Green is perhaps the most athletic and dynamic prospect in the entire draft, and he has subsequently established himself as a near lock to be a top-five pick.

Bottom Line: At 6-foot-11, Jones teased with his athleticism and offensive tools this past season at Texas. He will need to develop his physical strength and add polish to become a high-level NBA player; however, his long-term ceiling is extremely high. At this point in the draft, he might be worth the risk.

Bottom Line: Having struggled with his consistency at Stanford, Ziaire Williams has become a somewhat polarizing prospect. Overall, his freshman season was underwhelming. Although his slim build and ability to finish at the rim have drawn concerns, his upside is worth noting. A 6-foot-8 wing who is capable of creating space and hitting tough, contested shots, Williams has the potential to be a versatile scoring wing at the next level.

Bottom Line: Thor is undoubtedly one of the most intriguing prospects in this class. He's long, rangy and fluid for his size. These, paired with his ability to shoot the deep ball and protect the rim, give promise to great impact at the next level if it clicks. He likely won't be ready to contribute early in his career, but the physical tools and skill set are worth betting on.

Bottom Line: Despite being a little ways from making a real impact on an NBA floor, Josh Primo has tremendous long-term potential. He progressed well during his freshman season at Alabama, averaging 9.0 points per game while shooting 41.4% from three and 89.3% from the free-throw line in conference play. With good positional size, Primo will need to continue to build on his basketball IQ and versatility as he moves on to the next level, but he shouldn't be on the board too long, as his upside is undeniable.

Be sure to check out Matt's latest 2021 Mock Draft (and click on each player's name for in-depth analysis, stats, measurements and more).