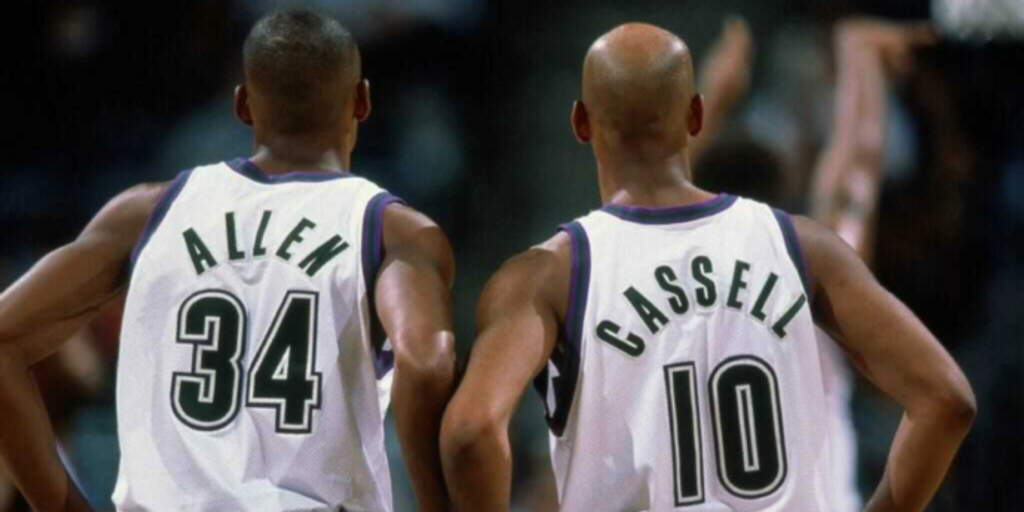 Growing up a Buck: My family's introduction to the NBA

In this series, Matt Babcock, the son of a longtime Milwaukee Bucks executive, shares his family's journey to the NBA. He also provides an inside look at the rise and fall of the Bucks during the late 1990s and early 2000s.

Most people know me as someone who comes from a family with an extensive NBA background.

Perhaps a surprise to some, I epitomized the role of a college “coach’s son” way before I was ever an “NBA kid," as my dad was a college coach until I was 12 years old. Throughout my childhood, my dad coached for the University of San Diego, San Diego State, Phoenix College, Northern Arizona and Arizona Western, and I was along for the ride. My home away from home was my dad’s office. I practically lived on the team bus and, chances were, you could find me on the court, or somewhere nearby, during practices and games. I served as a water boy, stat keeper and self-proclaimed assistant coach. I was a regular sidekick to my dad on recruiting trips and in his day-to-day business.

To say I had an exciting childhood would be a huge understatement. I lived for basketball, and I wanted to learn as much about the game as I could — I still do!

In 1996, my dad was hired as a regional scout by John Calipari and the New Jersey Nets. This meant goodbye to me being a college coach’s son and hello to the NBA. Conveniently, this job moved our family back to where we are originally from — Phoenix, Arizona — but we should not have unpacked our bags just yet.

In the fall of 1997, my life changed forever. I had just started the eighth grade. I came home from school one day, and my parents sat me down with my little sister, Suzanne, to let us know that my dad had been offered a job in the Bucks' front office. The position required our family to move to Milwaukee, Wisconsin and they wanted to know our thoughts. My first thoughts were: "Ray Allen? Glenn Robinson? Oh man, this is awesome! But where in the heck is Milwaukee?"

My parents flew out to meet with the general manager of the Bucks, Bob Weinhauer, and the owner of the team, Senator Herb Kohl. Before we knew it, the movers came, and we were off to this unknown place. We moved to a suburb right outside of the city named Shorewood, a very nice place. Admittedly, I had quite a bit of culture shock initially. We had moved a lot by this point, but we had only ever lived in cities in California and Arizona; Milwaukee was different.

First off, we arrived in the fall, and it was freezing! Then, I thought everyone spoke funny. And there are these things called cheeseheads — "Huh?" Brett Favre was in his prime and the Green Bay Packers had just won the Super Bowl the year before. It was undeniably Packers territory.

The Bucks were in a big transitional period (and when I say big, what I really mean is brutal). They had suffered years of losing. They hadn't seen consistent winning since Del Harris’ teams of the late '80s and early '90s.

However, the future finally started to look bright. Before my dad was hired, the Bucks drafted Glenn ”Big Dog” Robinson with the No. 1 pick in the 1994 NBA Draft and subsequently drafted Ray Allen in the 1996 NBA Draft. The movie "He Got Game," starring Ray Allen and Denzel Washington, was set to release in May. Ray and Big Dog were coming into their own as stars, and together formed a one-two punch that would promisingly be an offensive juggernaut moving forward.

Former Boston Celtics player and coach Chris Ford was the head coach for the Bucks. His assistant coaches were Jim Todd, Dick Versace and Mike Woodson. My dad worked under Weinhauer, who was the one that decided to hire him, for which my family will be forever grateful. Weinhauer and my dad had a long, lasting relationship that began when Bob interviewed my dad for an assistant coaching position on his staff at Arizona State in 1983, although he was not hired at that time.

Larry Harris, the son of veteran NBA coach Del Harris, worked with my dad in the front office. Larry began working for the Bucks in the video room early in his career, and would eventually work his way up to being the general manager of the Bucks years later. Jim Paschke was, and still is, the team's TV broadcaster (He’s retiring after this season). John Steinmiller was the team president. Senator Kohl was the owner. And I served as a ball boy. All in all, a lot of great people. That season was my immediate family’s real introduction to the NBA. We were settling into Milwaukee, and the Bucks were our newfound family.

Despite the rise of Allen and Robinson, the Bucks only improved their on-court production minimally, winning an underwhelming 36 games that year. That offseason, Senator Kohl decided to part ways with Chris Ford and his coaching staff.

Ford's replacement? None other than former Seattle SuperSonics head coach, George Karl. In hindsight, that first season with the Bucks was certainly “the calm before the storm.”

Read Part 2 of this series: ”Growing up a Buck: George Karl Arrives in Milwaukee."