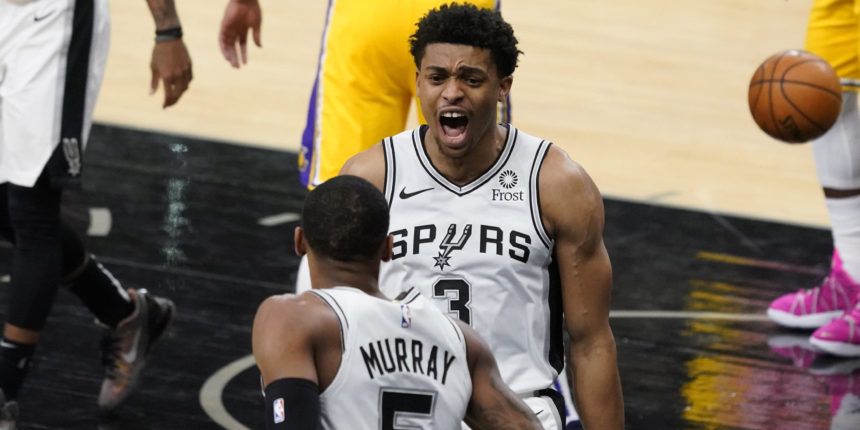 SAN ANTONIO (AP) — After relying heavily on veterans for two decades, the San Antonio Spurs are having growing pains in their transformation to a younger roster.

For the first time, San Antonio missed the playoffs for a second straight season after an NBA-record 22 straight appearances.

The days of Tim Duncan, Tony Parker and Manu Ginobili guiding a veteran roster have given way to Dejounte Murray, Derrick White, Keldon Johnson and Lonnie Walker learning on the fly through injuries, little practice and a compacted schedule because ot he pandemic.

“If any team needs practices to work on consistency and execution, we did,” Popovich said. “(But) I don’t know if I have ever been more proud of a team that just doesn’t quit. No matter what the mistakes, no matter what the circumstances are, they really fight. That’s a good base. So, I’m really proud of the way they conducted themselves and played to win.”

Popovich, 72, completed the first year of a three-year extension with Spurs. He will coach the U.S. team in the Tokyo Olympics this summer.

They overcame or lost double-digit leads in multiple games.

“Regardless of the situation, we just kept fighting,” Johnson said.

DeRozan and fellow veterans Rudy Gay, Patty Mills and Gorgui Dieng are all unrestricted free agents. San Antonio would like to have all back, but their returns are uncertain.

San Antonio should have money to spend: The Spurs are projected to be second only to the New York Knicks in available cap space this summer.

The Spurs have the 10th-youngest roster in the NBA with an average age of 25.3, but that drops to a league-low 23 years old without the four 30-something veterans.

“I think overall we can be proud of us for a big majority of our season, but we also know we have a lot that we have to improve on,” Spurs starting center Jakob Poeltl said.

[Editor's note: Be sure to check out this exclusive interview with Derrick White by our Spencer Davies]

The Spurs battled multiple injuries this season, including a series of foot and ankle injuries that forced White to miss half the season.

The team also had multiple players miss two weeks after contracting or being exposed to COVID-19. The league’s health and safety protocols forced San Antonio to cut short their annual rodeo road trip in February. Those games were rescheduled for the second half, leading the team to essentially play every other day over the final three months.

MORE:
Spurs
NBA News

Everything you need to know ahead of Suns-Lakers Game 2
Seeing Double: How the Grizzlies exploited cracks in Utah's defense


Is Onyeka Okongwu ready for more with the Hawks?
22h