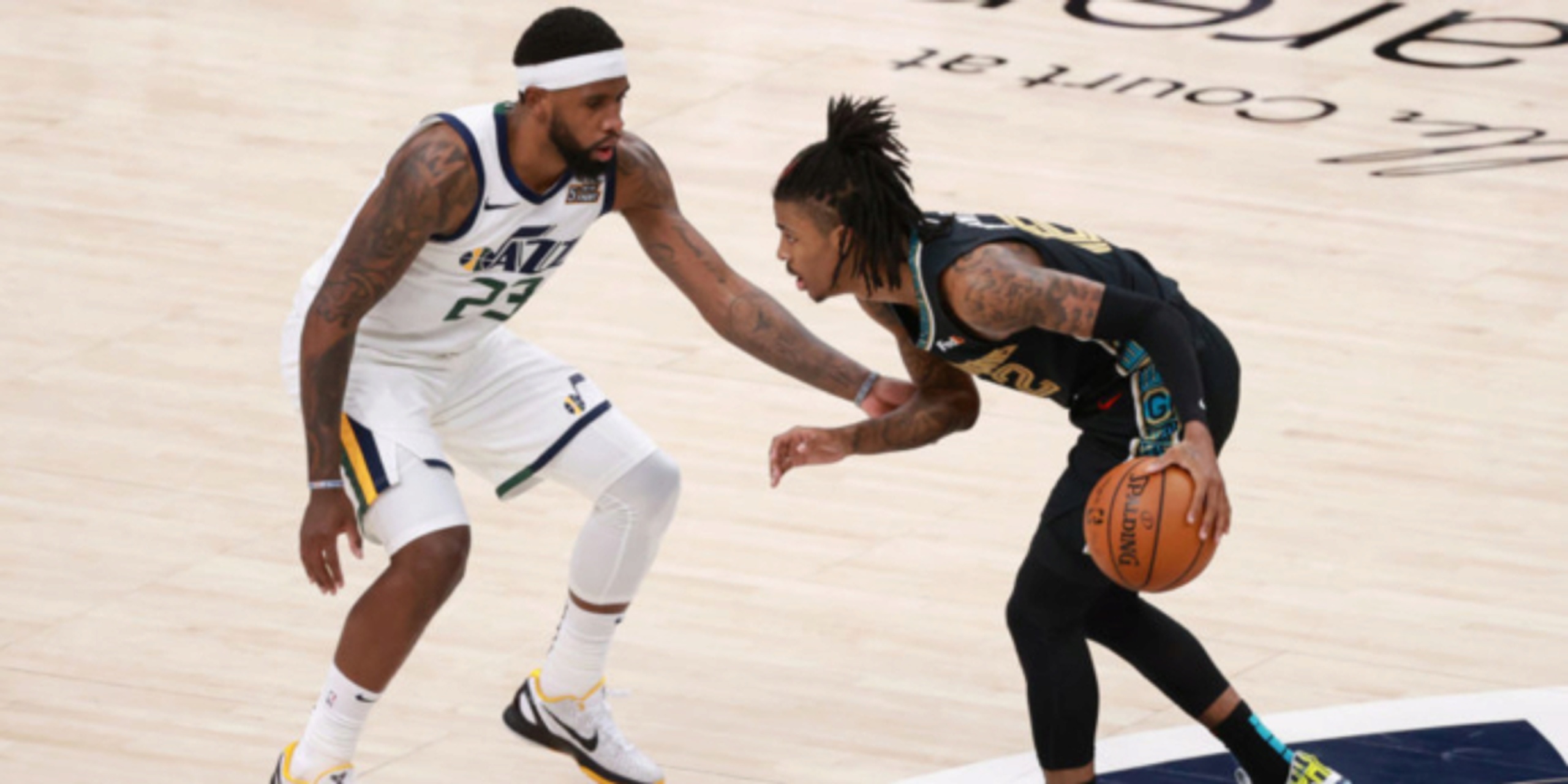 Seeing Double: How the Grizzlies exploited cracks in Utah's defense

But the Grizzlies' offense humming like that was intriguing. They got off to a cold start in their own right, posting a 100.0 ORTG in the first half. The second-half bounce back was impressive because of the way they got it done: half-court, pick-and-roll play.

I had questions about the Grizzlies scoring against the Jazz when their defense was set. I was especially concerned about how Ja Morant, in particular, would hold up against postseason planning. To that point, it was encouraging that the Grizzlies had a plan and stuck with it.

Their preferred method of attack: pick-and-rolls involving a pair of screeners. Dragging more bodies into the action gave Jazz defenders, particularly the ones at the point of attack, more to think about. More space to navigate. That indecision, paired with the natural openings of the drop coverage the Jazz play, gave the Grizzlies options to exploit.

Let's start with this third-quarter possession.

The Grizzlies go with a double-high look with Jonas Valanciunas and Jaren Jackson Jr. as screeners. Jordan Clarkson is in a bit of a pickle. The mental math quickly begins.

Which screen is Kyle Anderson going to use?

Would it be better to fight over or under the screen?

Is the screener, whichever one Anderson uses, going to roll or pop?

How does that affect the recovery path?

Anderson chooses to use the Valanciuas screen to his left. Clarkson guessed incorrectly, his initial movement going to his left toward Jackson Jr. There's obvious trouble there; Clarkson is now behind the play, leaving Derrick Favors in a 2-on-1 situation.

Yet, there's more here. Look at Bojan Bogdanovic. As Valanciunas rolls to the basket, Jackson Jr. pops above the break. Bogdanovic has to make a choice: provide some semblance of a tag on Valanciunas' roll, or stay attached to Jackson Jr. and give Valanciunas an unimpeded path. He opts for the latter.

The result is a fruitful one. Favors steps up to contain the Anderson drive. With no tag from Bogdanovic or weakside help behind that, there's nothing Utah can do to take away the lob.

A fun part of playoff ball is that it's all about exploits, baby. The Grizzlies got the result they wanted and went back to the well on the very next possession.

We got a nifty example of Dillion Brooks and Valanciunas operating as screeners.

Brooks' positioning is key here. Joe Ingles can't provide any sort of tag on the Valanciunas roll in good conscious, so Valanciunas is able to freely rumble into the lane.

Bogdanovic pulls over from the corner to provide late relief, an understandable-yet-risky decision considering Morant's passing ability and Anderson's newfound shooting stroke. Here's your kind reminder that Anderson shot 36% from three on moderate volume this season.

Morant ends up making his own magic out of the play. He slithers inside of the trailing Royce O'Neale. It isn't a full "snake" of the screen, but it's enough to get O'Neale on his hip. Morant peeps Bogdanovic and Favors converging on the roll, so he bounces it outside and opts for the floater instead.

Of course, sometimes it doesn't even take all that.

Same alignment, but this time Anderson replaces Brooks as the screener. O'Neale gets caught in traffic. Morant turns on the jets, blowing by the recovering O'Neale before launching off one foot for a skyscraping floater over the outstretched limbs of Favors.

We did get to see a counter from the Jazz later in the half.

Instead of ducking under or looking to stay attached to Jackson Jr., Bogdanovic shows high against Morant in an effort to keep him from turning the corner. Jackson Jr. short-rolls, but does so with Valanciunas also occupying the area.

Of course, Morant is so good that the gambit doesn't work. He simply resets and works 2-on-2 with Valanciunas and gets a bucket out of it.

The Grizzlies still should consider leaning into this setup more in Game 2. They generated a point per possession (1.00 PPP) on 10 "double-pick" looks in the second half, per a source with access to Second Spectrum tracking data. It's a solid bump from their general pick-and-roll efficiency (0.93 PPP, 24th in the NBA, per Synergy).

Being able to give the Jazz more things to sift through while attacking the cracks of their base coverage is ... probably a good idea.