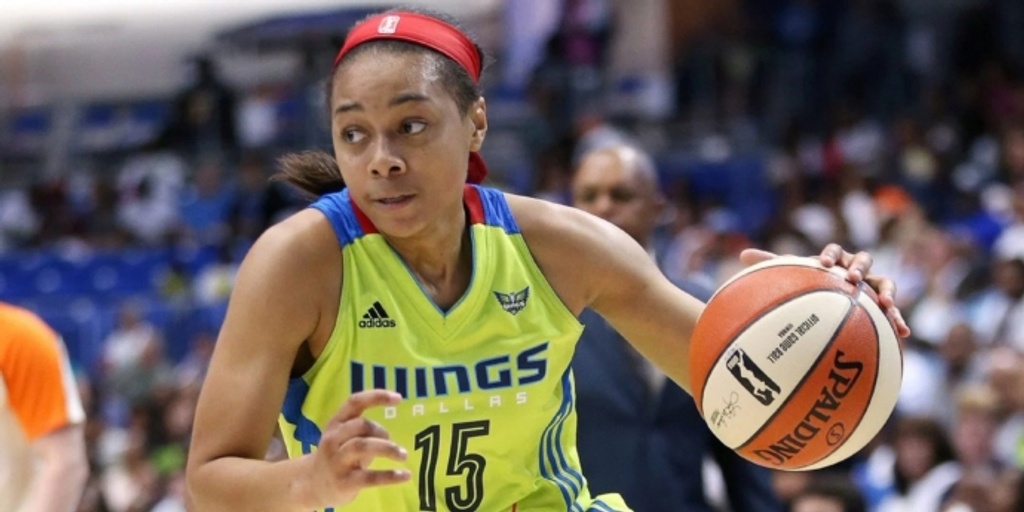 Gear up for fireworks, folks.

The fun period of the WNBA offseason is on the horizon. As of yesterday, teams are now allowed to offer qualifying offers and core designations to their own restricted and unrestricted free agents respectively. That period ends on Jan. 20, with (outside) free agents and teams being able to negotiate deals on Jan. 21.

With superstars like Breanna Stewart, Candace Parker and Nneka Ogwumike headlining the market — and with rumors already swirling about Stewart eyeing the Big Apple — this is one of most anticipated free-agency periods in recent memory.

Below the star tier, it's worth keeping an eye on what's happening with the Dallas Wings.

Midway through last season, Khristina Williams of Girls Talk Sports (follow her!) reported that Allisha Gray — an All-Star caliber wing for Dallas — would stick around through the trade deadline, but was expected to be moved during the offseason.

Well, the offseason is here, and, per Williams, that's looking more like an inevitability.

Here's her report from Wednesday night:

SOURCES: Allisha Gray is expected to be traded from Dallas. Possible destinations include Washington, Chicago, Connecticut,and Atlanta. Gray is in the last year of her contract and plans to exercise free agency when her contract is up. @GrlsTlkSportsTV #WNBA #WNBAFreeAgency https://t.co/KEp5ALIMib

Not only do we have a follow-up on Gray, but we also have potential destinations!

The Connecticut Sun are fresh off a Finals appearance (and a loss to the Las Vegas Aces), but have their own tightrope to walk with an actual All-Star. Brionna Jones, a two-time All-Star and reigning Sixth Woman of the Year, is an unrestricted free agent this offseason. And because of the Sun's salary crunch, they may not be able to retain her on the max deal she's worthy of without moving a piece (or two) of their core.

Aside from the Seattle Storm, there may not be a team in The W with more potential roster turnover than  the Chicago Sky. After losing to the Sun in the Eastern Conference Finals, they're now faced with a daunting offseason. Parker is a free agent, as is All-Star guard Courtney Vandersloot, sharpshooter Allie Quigley and budding star big Azura Stevens.

The Washington Mystics are stacked with talent, headlined by Elena Delle Donne and a pair of two-way forces in Natasha Cloud and Ariel Atkins. Though they have pending free agents like Alysha Clark, Shatori Walker-Kimbrough and Elizabeth Williams, they don't run the risk of losing core talent like the Sun and Sky, which sets them up as an interesting landing spot for Gray.

And then, we have the Atlanta Dream, whose organizational overhaul has set them up for long-term success. Not only do they have talent now — reigning Rookie of the Year Rhyne Howard has "star" written all over her, and versatile big Cheyenne Parker is coming off the best season of her career — they're flush with cap space.

In summation, the destination list contains three recent contenders and one team that's on the upswing and has plenty of money to spend. All four could use a shooting boost in particular.

To that end, it's easy to see why Gray is so coveted. She was one of six players to knock down 40% of her threes while attempting at least four per game. Her ability to play-make against tilted defenses adds to her offensive value. Add in her defense — the list of players who can defend on the perimeter like or better than Gray is a short one — and you have one of the most versatile wings in the sport, smack dab in the middle of her prime.

When players like her are on the trade market, it would behoove a good team to pounce. Her contract status could complicate things a bit; she has one year left on her deal and, per Williams, she plans on testing the market next offseason. But this is the type of player you shouldn't have issue commiting to long-term.

Among the teams listed, I'd probably give the Mystics the edge here.

In light of Dallas having some questions in the frontcourt — Isabelle Harrison is an unrestricted free agent who isn't far removed from complaining about her playing time; Teaira McCowan is a restricted free agent with up-in-the-air market value due to play style — the Mystics could use Myisha Hines-Allen to headline a package. Beyond that, the Mystics have draft equity to use, including the No. 4 overall pick in this year's draft.

A starting five of Cloud, Atkins, Gray, Delle Donne and Rookie of the Year runner-up Shakira Austin (already a near-elite defender) would challenge the Aces for the best unit in The W.

Among the teams not listed in Williams' report, I wonder if the New York Liberty could get into the mix. They could surely use more punch in their stable of perimeter options.

It was almost comical how much better their defense looked — roughly five points per 100 possessions stingier — when Betnijah Laney rejoined the rotation after recovery from meniscus surgery. She was the Liberty's only wing option that could credibly defend while also drawing the attention of defenders when operating off the ball.

Regardless of who lands her, you can put Gray's name on the list of players whose acquisition could help shape this year's title picture in The W.