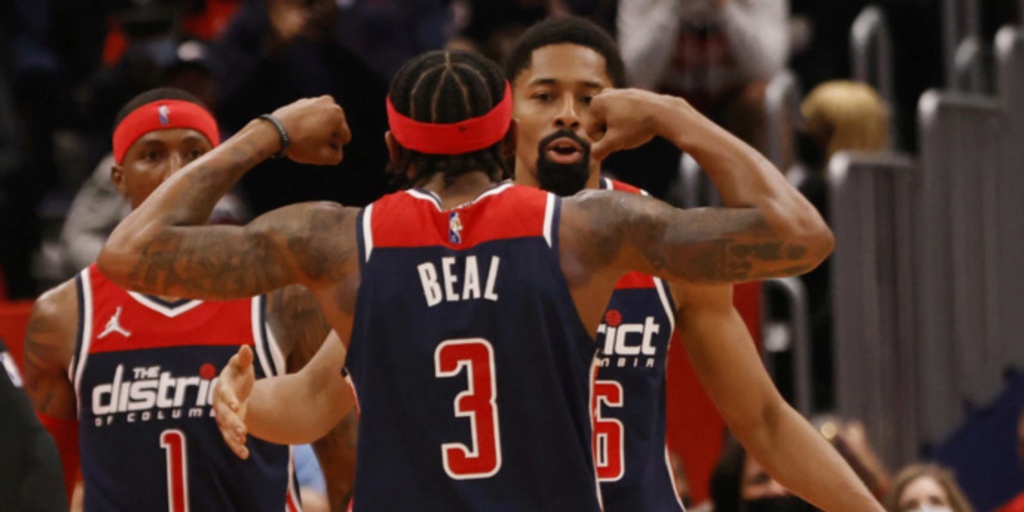 The Washington Wizards were forced to retool on the fly after last season, with serious consequences potentially looming for the franchise.

Russell Westbrook asked for a trade after just one season, but the front office somehow swindled draft capital plus three rotation players from the Los Angeles Lakers as they escaped that albatross contract.

From Washington’s point of view, it made too much sense not to capitalize and switch some pieces around their rotation with an important 2021-22 campaign looming. Bradley Beal rumors have been running rampant for multiple years now, and the potential of Beal leaving has never been higher since he can hit unrestricted free agency in the summer of 2022.

With a roster that seemed to perfectly complement their superstar shooting guard with two-way versatility across the board, I bought the team's stock hook, line and sinker as it related to their strong start.

Kicking off the season going 10-3, Washington was well on its way to finally showing progress before Beal’s career-altering decision to apparently not sign an extension this summer. However, the team has completely gone off the rails ever since. A 10-3 beginning led to a disappointing 14-24 mark afterwards. Washington is on the outside looking in right now in the reloaded Eastern Conference.

Take a look at the advanced metrics from the Wizards’ red-hot start followed by their big-time regression to the mean:

As showcased with the advanced look within the Wizards’ on-court successes and failures, the main culprit is on the defensive end. The Wizards’ defense was clicking early on, but they benefited from a league-wide slow start offensively.

Zooming back out, Washington’s 10-3 clip always flashed a buyer beware sign. Scoring 107.5 points per 100 possessions, Washington’s early-season mark would now rank them No. 27 in the Association.

Washington’s seismic collapse on the defensive end is the inverse of what’s going on with the Charlotte Hornets. Twelve points per 100 possessions worse over this span, the Wizards have multiple holes being exposed along the way to a tumultuous trade deadline.

According to longtime NBA insider Marc Stein, Washington has let it be known three players are available for the team with the best offer: Spencer Dinwiddie, Montrezl Harrell and Thomas Bryant. The latter two make sense, especially as Daniel Gafford has emerged into a long-term piece in D.C. Clearing the way for heavy Gafford minutes makes a lot of sense, but let’s circle back around to Dinwiddie here.

Entering this season, Dinwiddie checked all of the boxes for a potentially perfect backcourt fit for Beal. Dinwiddie’s profile featuring on-ball creation, playmaking, as well as nights where he can take scoring pressure off Beal was rightfully attractive to the Wizards. Washington acquired Dinwiddie from Brooklyn via sign-and-trade, inking a three-year, $54 million deal.

Having Westbrook leave and adding Dinwiddie was supposed to fix the issues Washington observed with a high-usage ball handler alongside Beal. Instead, this fit hasn’t looked good at all throughout.

When Beal and Dinwiddie have shared the court this season, Washington has a 13-18 record. Among two-man lineup combinations around the Wizards’ star, Dinwiddie checks in low on the totem pole. The Dinwiddie-Beal backcourt was a nightmare on the offensive end, showing no true chemistry with a 101.7 OffRtg. The defense was passable at points between this duo, but the offense was truly a disaster to watch unfold.

Beal’s scoring compared to when Dinwiddie is in and out is a damning statistic:

The player-team fit on display between Washington and Dinwiddie has been a nightmare scenario. According to The Ringer’s Kevin O’Connor, Wizards teammates believe Dinwiddie is a shell of himself post-knee injury, so now they don’t want him there.

Dinwiddie also said last week that he tried to be a vocal leader with the Wizards, but the reception he got for it wasn’t welcomed.

“It’s an interesting situation. I spoke up a little bit early on,” Dinwiddie said. “It wasn’t necessarily welcomed. And so, like I said, I try to do whatever is asked of me. At the end of the day, everybody has a role to play.”

Dinwiddie’s fit in D.C. hasn’t allowed him to play at the same level we saw in Brooklyn, but he’s done himself no favors with his new team. Compared to his breakout campaign in 2019-20, Dinwiddie does look like a shell of himself from a scoring perspective.

Washington was expecting an 18 to 20-points per game scorer, but they’ve instead received a Dinwiddie who’s been unable to complement Beal. We’ve also witnessed an epic collapse from the Wizards’ defense, which has led to multiple double-digit leads being blown in the process.

So, what’s next for the Wizards after admitting their failure with the Dinwiddie experiment? Will the Wizards now pivot to full-on selling, or make one last big swing to appease Beal?

Whatever button Washington decides to push will have major ramifications leading up to next week’s trade deadline.

If the Wizards decide to become buyers, don’t be stunned if they make an eye-opening move for Jerami Grant or Domantas Sabonis. On the other side, if the Wizards sell, does that seal Beal’s long-term fate in D.C.? It certainly feels like foreshadowing, if that indeed is the Wizards’ decision.

Regression has hit Washington to the point that huge decisions needs to be made immediately. It might be time to say goodbye to the Beal era, which has spanned many seasons, but led to disappointing results far more often than not.