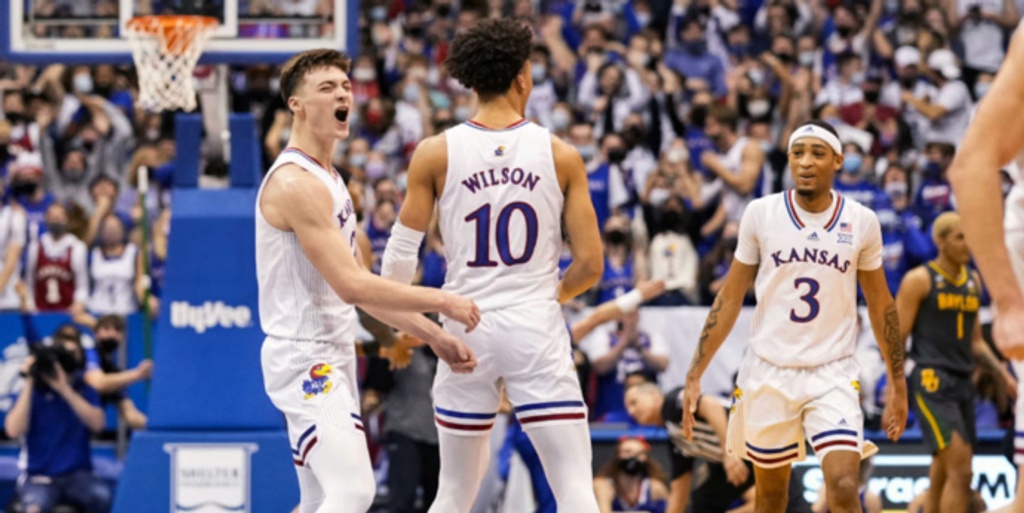 In a battle for the top spot in the Big 12, Kansas sent a message and took the life out of the Baylor Bears, winning 83-59. Christian Braun and Ochai Agbaji led all players in scoring with 18 points each, with Braun also adding 10 rebounds, 3 assists and a steal.

Baylor (19-4, 7-3 Big 12) is currently slotted as a No. 1 seed in the NCAA tournament thanks to a phenomenal season thus far. They are third in the country in Adjusted Efficiency, led by a three-headed monster backcourt of L.J. Cryer, James Akinjo and Adam Flagler who combine for 40.2 points per game.

The Jayhawks (19-3, 8-1 Big 12) are 10th nationally in Adjusted Efficiency, but are third in offense. Agbaji continues to make his case for Player of the Year with 20.9 points and 4.9 rebounds per game on 46.4% shooting from behind the arc.

Kansas and that No. 3 rated offense got started early and jumped out to a 12-2 lead, electrifying the home crowd. By the 10:00 mark, they led 25-9 and none of the Baylor guards had scored a single point. Agbaji, Braun, and Jalen Wilson scored 20 of the team’s first 27 points.

The Jayhawks extended the lead to 37-17 after an and-one and transition alley-oop from Agbaji to Braun, and would lead 39-21 at the half. Braun led all players with 14 points on 6 of 11 from the field. Potential lottery pick Kendall Brown led Baylor with 7 points and 6 rebounds. Tchamwa Tchatchoua had 4 points, 4 rebounds, 1 steal and 1 block off the bench. The Baylor guards were 0 for 14 from the field.

At the 17:10 mark in the second half, Matthew Mayer was called for a charge and head coach Scott Drew went crazy. He was assessed a technical foul and Kansas connected on the free throws to make it 46-26. At 11:33, Agbaji connected on a triple to make it 63-36 and the rest is history.

With 2:48 in the game, the walk-ons entered and the student section loved it. Kansas held on to win 83-59 and took a two game lead in the conference standings.

Wilson had a solid game with 15 points, 7 rebounds, 4 assists, 2 steals and 1 block. Brown posted 12 points, 8 rebounds and 3 assists. Matthew Mayer scored 7 points on 2 of 9 from the field.

The first half today was Baylor’s lowest scoring half this season.

Remy Martin is still out with injury and did not play in this one.

Kansas visits No. 23 Texas on Monday.