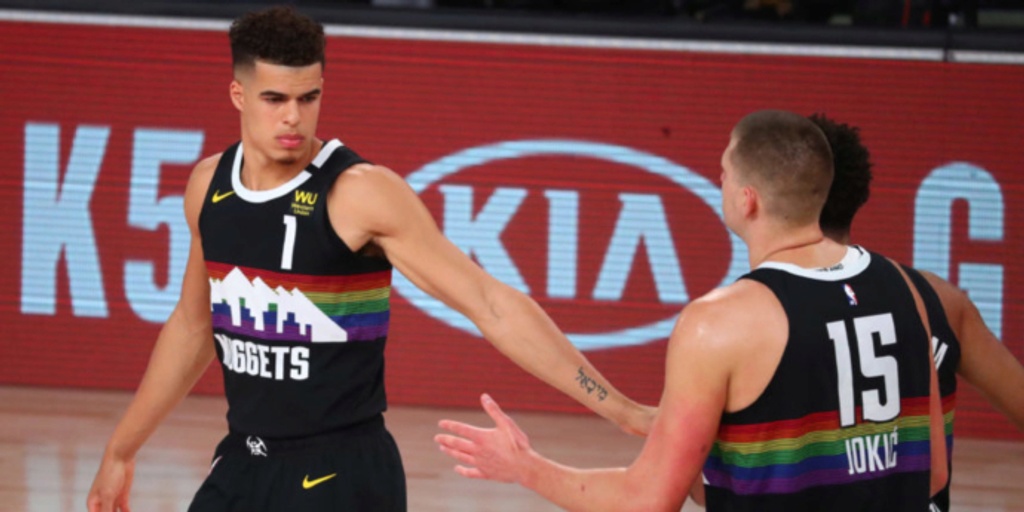 Will Nuggets stay afloat in West without Jamal Murray?

It’s not often that the team who has the defending MVP on its roster is flying well-under the radar heading into the following season — but that’s exactly what is happening with the Denver Nuggets.

Nikola Jokic epitomizes the Unicorn mold that is so valuable and transcendent within the modern NBA. As a 7-footer who can operate the offense and score efficiently from all three levels, Jokic manipulates defenses with rare savvy. Jokic is like Peyton Manning, thinking two or three moves ahead and putting defenders exactly where he pleases. The end result? Easy baskets for optimum offensive output. After averaging 26.4 points, 10.8 rebounds and 8.3 assists on an outstanding 64.7% True Shooting percentage, Jokic is just now reaching his top form on the basketball court.

Denver has magnificently built a team to strengthen his incredible gifts.

Jamal Murray is the perfect 1B to Jokic’s 1A, a flamethrowing scorer who can erupt at will. In addition, Michael Porter Jr.’s development as a scorer adds another wrinkle to the Nuggets’ long-term ceiling. Looking back on it, Porter dropping to No. 14 overall because of back concerns was a gamble that could have changed the fortunes of Denver’s window with Jokic. Aaron Gordon is a bulky, uber-athletic big who can guard three positions and move effectively without the ball, capitalizing on easy cuts to the rim. To top it off, Will Barton and 2021 first-round pick Nah’Shon “Bones” Hyland provide microwave scoring off the bench and can further supplement a continuous wave of offensive firepower.

Looking ahead to the 2021-22 season, how does Denver stack up? With Murray’s rehab moving forward from a torn ACL — a setback that really dampened Denver’s high-end outcome last season — a potentially slow start could be in store. Murray’s projected timetable for a return could last until around the All-Star break or later, which means Jokic and Porter will have to buoy the Nuggets’ output every night. We know what to expect from Jokic, but Porter having the opportunities to further his talented rise is a great scenario for Denver. From April 6 and on, Porter averaged 21.4 points while shooting 42.7% on three-pointers in 32 games. This was a preview of Porter’s upcoming role as the top secondary option behind Jokic, one that will play such a critical factor to Denver maintaining its elite status without Murray.

Porter has flashed immense potential as a scorer, but he still needs work as a defender and playmaker. During the Western Conference semifinals, Phoenix Suns head coach Monty Williams told his star backcourt duo of Chris Paul and Devin Booker to continuously hunt Porter in switch opportunities. Once Phoenix figured this formula out, the team made Porter nearly unplayable while Denver was swept with emphatic fashion. If Porter is able to take strides forward as a passable defender — similar to the development we’ve actually seen from Booker in Phoenix, actually — it will go a long way toward him reaching a potential star-level profile within the Association.

When you look outside of the Nuggets’ trio of Jokic, Porter and Gordon, it’s an unproven bunch that will need to supplement well-rounded play in Murray’s absence. Until the "Blue Arrow" returns to play Robin to Jokic’s Batman, Denver will need more development from its young core. Hyland shined in the summer league, further hammering home the case that he should play an immediate role off the bench to alleviate the pressure off Jokic and Porter. However, question marks loom over the big-man duo behind Jokic: Bol Bol and Zeke Nnaji. Bol is a true wildcard, but he’s never been utilized within the Nuggets’ rotation as he enters the final year of his contract. Meanwhile, Nnaji had a rough summer-league outing where he looked lost at points. If neither can step up, Jokic is in line to lead the NBA in minutes played this season.

Let’s take a look at the Nuggets rotation without Murray for the 2021-22 campaign:

It’s a lot of question marks and unproven depth behind a solid starting lineup, which maybe caps where Denver can go this season without a fully healthy Murray providing scoring fireworks. The Suns exposed the Nuggets in the playoffs, and surely many teams will test that theory to further extends early on. If Denver stumbles out of the gate, the team's ceiling could be a No. 4 seed. However, as we saw once Murray went down, Jokic can carry a roster single-handedly. If Jokic maintains MVP-level production, which should be a near-lock, Denver can stay afloat near the elite tier of the West. Are they better than Phoenix, Utah, the Los Angeles Lakers and potentially even a Dallas team with a forthcoming superstar leap again from Luka Doncic? Probably not.

Denver will need Porter to produce Murray-esque levels of offensive production, while Gordon needs to be more assertive within the streamline of the Nuggets' free-flowing offense that runs through their jumbo-sized playmaker.

Once Murray returns, Denver has already shown how lethal it can be. If you add another dynamic scorer to the mix in Porter — whose confidence should reach all-time highs in Murray's absence — this team can go on a run. Murray’s wildcard factor late into the regular season and playoffs will be the top factor to watch with Denver.

If Murray is back to Murray — soul-snatching, back-breaking moments as a deadly scorer — the Nuggets are ready to pounce as a dark-horse contender who can make a deep run. Jokic and Porter will need to keep the Nuggets afloat and within a solid positioning, and the Nuggets hope to have Murray provide the much-needed jolt of stability and star-power back into the equation.

We don’t talk enough about the Nuggets heading into the 2021-22 season. But it’s the Nuggets’ 1B to their MVP who truly holds the trump card for where they can go upon Murray's eventual return.