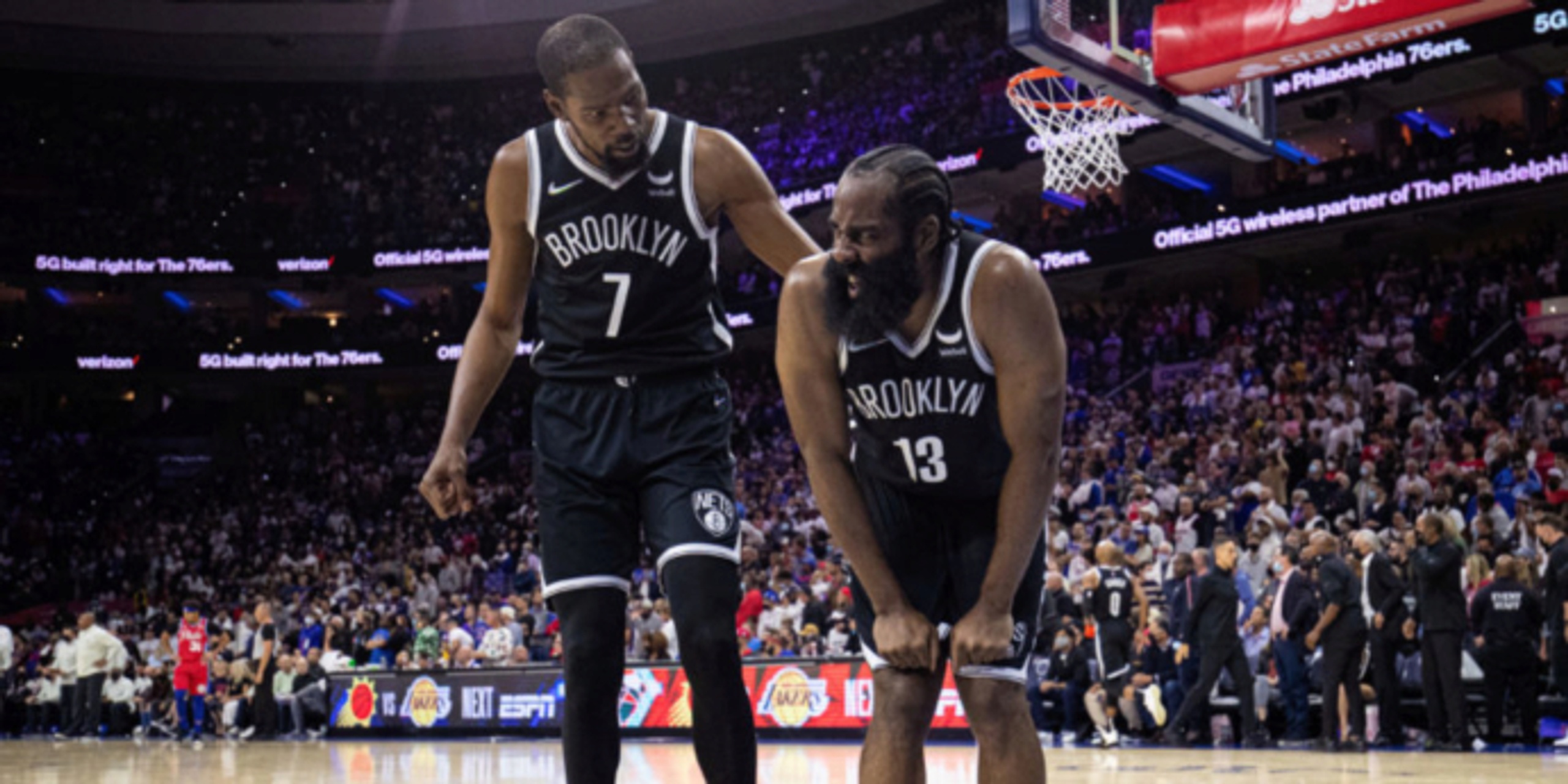 Why isn't James Harden getting to the free-throw line?

James Harden is having a weird season.

We're only four games into the campaign, but Harden has looked like a shell of himself. His stat line — 17.3 points (40/32/92 shooting splits), 7.0 rebounds, 8.3 assists (4.8 turnovers) — is well below the MVP-caliber, future-Hall-of-Famer standard he's set for himself.

The real kicker is the free-throw numbers. Shooting nearly 92% from the line is up his alley; he's a career 85.6% converter from the line. But having 12 free-throw attempts through four games isn't just an outlier; it's a stop-in-your-tracks-and-call-for-help development.

Or so it seems that way.

The primary theory seems to be that the NBA's emphasis on curbing unsavory foul-drawing tactics has rendered Harden powerless. That without his tricks, he's simply a very good player lacking the elite-level half-court counter (oodles of drawn fouls on a dime) to make him unguardable.

After the Nets' loss to the Charlotte Hornets on Sunday, head coach Steve Nash gave the press (and the officials, and the league) a piece of his mind about the situation.

"I feel like he's unfairly become the poster boy of not calling these fouls," said Nash.

Harden agreed, but was more diplomatic about the ordeal.

"I'm not the one to complain about it," Harden says. "Sometimes, I feel like, coming into a game, it's already predetermined or I have a stigma of getting foul calls. But I just ask for the officials to just call what they see."

So that's it, right? The NBA is cracking down on foul tricks, thus hurting Harden and making him less effective. Problem solved.

It's true that the rule changes have had an effect. The league-wide average of free-throw attempts this season (19.8) isn't just the lowest mark in NBA history, it would be the first time the league finished under 20 attempts per game.

There have been instances of Harden attempting to get to the line with his usual bag, only for those endeavors to end without a trip.

Here's Harden trying to draw a landing-space foul on a three-pointer with a subtle swing of his right leg.

Here's a rip-through attempt against Davis Bertans that isn't rewarded:

We'll start with the numbers.

21.2% of Harden's shot attempts have come at the rim this season, per PBP Stats. That's over seven percentage points lower than last year's mark (28.6), and well below his career average (30.3).

His rim rate is down, while his three-point rate (.470) has only risen slightly (.455) from last year. Where have the rest of the shots gone?

A whopping 31.8% of Harden's shot attempts have come from the "short mid-range" area. This may shock you, but that is both a rise from last season (23.7) and more than double his career average (13.7).

The next question is a simple one: Why is Harden leaning on his floater so much, as opposed to getting all the way downhill?

The short answer is "he can't get all the way downhill," but that requires a little context.

First, Harden doesn't have the same burst as a driver. That's how aging generally works, and it's also exacerbated by the fact that last season ended with a hamstring issue. It's clear that Harden is working himself back to form.

In addition to that, you have to give credit to defenses.

Look at who the Nets have faced early on: Milwaukee, Philadelphia, Charlotte and Washington. Aside from the Hornets, those teams utilize drop coverage — guard by fighting over or ducking under the screen, big man dropping back into the paint — as their base. The entire point of a drop is to wall off the rim, forcing ball-handlers into the type of shots that Harden is taking.

Further complicating matters is who is surrounding Harden in these lineups. This isn't a "Woe is Harden, he's playing with bums" argument because, come on, man. We aren't daft on this side.

What I will say, however, is that there is an obvious downside to Jevon Carter or Bruce Brown being on the perimeter instead of Kyrie Irving. Even Patty Mills, who has been on fire to start the year, doesn't garner Kyrie-esque attention. Defenses are able to cheat away from those guys whenever Harden attacks. That allows them to further dictate what Harden gets to do.

Peep this possession from the Sixers game.

The Nets go with Chicago action — a pindown that flows into a handoff — to get Harden downhill. Joel Embiid makes an incredible block to end this possession, but why (aside from him being really freaking good) was he able to make the block?

Mills sets the initial screen from Harden before spacing in the strong-side corner. Mills' defender, Tobias Harris, simply doesn't give a bleep about him on the play. Harris is able to tag and "hold" on the roll, taking away the option for a potential lob (stop laughing) to Aldridge. And with Harris effectively switching on to Aldridge during the roll, Embiid's sole focus is on Harden.

How about this possession from the Hornets game?

No ball-screen here, just an early-offense attack while the matchups are a bit fried for the Hornets. Harden soundly beats PJ Washington off the dribble, but look at what happens next.

Gordon Hayward completely leaves Nic Claxton to cut off the drive. Miles Bridges completely leaves Carter in the corner — while Carter is a career 40.2% corner shooter, teams largely don't care due to volume — to take away the potential dump-off (or lob) to Claxton. Harden's only realistic option is to make the kick-out.

So if you're wondering why Harden's not getting to the line yet, it's a bit of a hodgepodge.

Harden has to make some adjustment to how the refs are calling things. He still has to get his legs fully under him, and even that doesn't mean we'll get the 2018-19 version of him. The current roster (and lineup) construction is allowing defenses to cheat more than they were able to last season.

There's quite a bit going on, though it's important to remember we're working with a four-game sample right now. Let's hold off on writing the obituary on Harden as a superstar driver of offense.