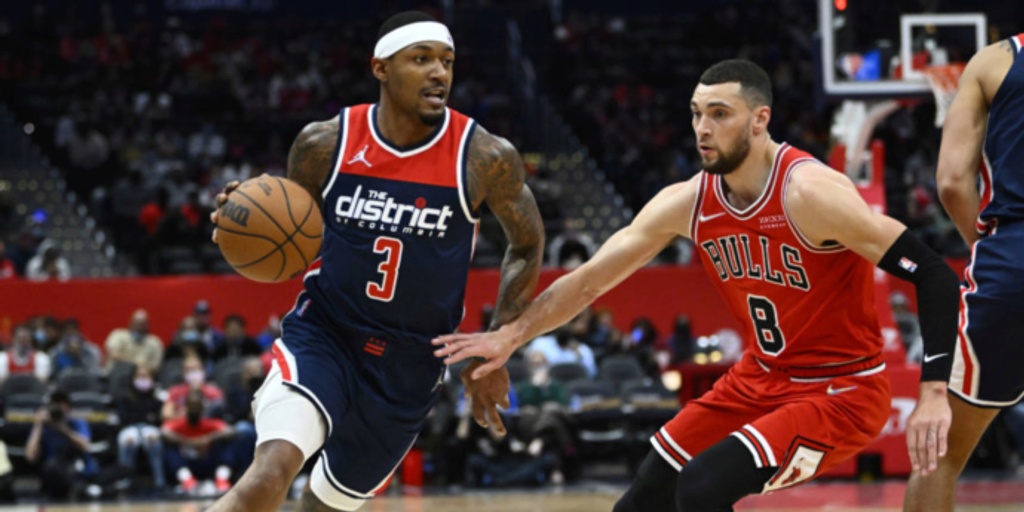 2022 NBA Free Agency: Predicting where 5 stars will land this summer

We’re officially two months away from 2022 NBA Free Agency officially kicking off. Although the class is rather shallow — especially on superstar movement — the headliners provide some intrigue and there are endless possibilities in terms of the potential domino effects.

Will Zach LaVine and Deandre Ayton be viewed as max-level talents by their respective organizations? What will happen with James Harden and Kyrie Irving? Will Bradley Beal once again commit long-term to the Washington Wizards?

Let’s dive into my predictions on what the top-five projected free agents will likely do this offseason, and how those moves could alter the calculus of the entire NBA.

Philadelphia 76ers president Daryl Morey accomplished his long-awaited dream when he helped James Harden and Joel Embiid join forces in Philadelphia earlier this season. When Harden wanted to get out of Brooklyn (an era we'll look back on as a huge "what if" in NBA history), the Sixers pushed their chips all-in on the dominant inside-out duo’s potential.

However, having sent out Ben Simmons, Seth Curry, Andre Drummond and future draft capital to the Nets, it hasn’t gone as smoothly as many expected for Harden. After a fast start with his new team, Harden's production has tailed off. Now, with Embiid's postseason status in jeopardy due to an orbital fracture, can Harden recapture his form before another important career decision?

Since these numbers aren't anywhere close to vintage-Harden levels of offensive production, does Morey feel comfortable shelling out a gigantic long-term extension to the 32-year-old, high-usage guard? It feels like we’re entering into the next phase of Harden’s career, and if that’s the case, he’s probably not a $40-plus-million player.

It seems like Philadelphia is backed into a corner in this situation though. After shipping off Simmons and future assets to Brooklyn, the Sixers have committed to Embiid and Harden hopefully delivering a championship within their short-term window.

Prediction: Harden opts out and re-signs on three-year max contract

Who knows what the future holds as it relates to Kyrie Irving? Unwilling to get vaccinated against COVID-19, Irving cost the Nets a realistic chance at competing for an NBA championship this season; this should've never been an issue, but he had to try to catch up and learn on the fly with his teammates.

Irving is the true wildcard to watch this summer. If he decides to move on from the Nets, it wouldn’t be a surprise at all. Honestly, even retirement wouldn’t be a complete surprise with Irving. In the end, though, the Nets are also married to this idea of competing for rings over the extended window with Durant.

The reason why Durant joined the Nets was to play with his best friend in Irving. It’s hard to envision Irving leaving Brooklyn, and he echoed similar sentiments after the Nets’ disappointing first-round exit against the Boston Celtics.

“There’s no way I’m leaving my man 7 anywhere,” Irving said after the series.

"I don't really plan on going anywhere.... when I say I'm here with Kev [Durant] I think that it really entails us managing this franchise together alongside Joe [Tsai] and Sean [Marks]... we're cornerstones here but we have Ben, we have a few other guys..."

The Nets should definitely reconsider their stance on handing out a potential five-year max extension to Irving though. Understanding his unpredictability, who knows what could happen in the future with him? With Durant still dominating, Irving will likely align his next contract on a similar path.

Prediction: Irving opts out and re-signs on four-year max contract

Will Bradley Beal really decide to stick around in D.C. for the long-term? I have serious doubts on that idea, and Beal should as well for his legacy. Even in a down year for the Washington Wizards — one in which he was shut down due to a torn ligament in his left wrist on Feb. 8 — he’s still a star-level player in the NBA. Capable of dropping 30-plus points with ease at anytime, Beal has consistently shown the team around him has been the main issue. Carrying subpar teams on his back since John Wall left, Beal needs to consider doing the greater good for his own individual outlook.

From Beal’s perspective, looking around at other options to win right now would be the best-case scenario. While he's been very loyal to the Wizards since being drafted by the organization, this could become very awkward rather quickly once the offseason window opens.

Washington has done a fantastic job retooling its team on the fly since trading away Russell Westbrook. Rolling the dice on Kristaps Porzingis at the trade deadline is a massive risk, but he’s the closest thing to a star-level player who would be willing to stay long-term. With Porzingis and a plethora of young talent led by Kyle Kuzma, will Beal lock himself into this situation for another four or five years?

The trade market will be the most realistic route to see star movement in the summer. Beal is one of those names to watch via sign-and-trade. If Beal opts out, don’t be surprised to see him sign elsewhere while not leaving the Wizards high and dry with nothing back in return. Beal seems destined to spread his wings elsewhere and serve as the cherry on top of a true title contender's roster.

Prediction: Beal opts out and the Wizards pull off sign-and-trade to recoup some assets

Zach LaVine is one of the more underrated players in the league. He’s a highlight reel on the offensive end, but his defense leaves so much to be desired. We’ve seen incremental improvements with LaVine on that end with better talent around him, but will the Bulls view him as a max-level player? Committing that type of money to LaVine could be risky — especially with an upcoming offseason knee surgery — but it’s the Bulls’ best bet to keeping their core together long-term.

If the Bulls balk at paying LaVine, many teams with cap space will come knocking on his door. San Antonio Spurs point guard Dejounte Murray has already started recruiting LaVine on social media with photoshops of him in their jersey, for example.

LaVine and DeMar DeRozan showed throughout this season that they are a lethal scoring combination that is very difficult to contain. Before injuries ravaged Chicago’s roster, they were one of the best teams in the Eastern Conference. Maybe the Bulls try to move Nikola Vucevic, who has a $22 million expiring contract; Rudy Gobert could be a name to watch if the Bulls try to take their team to another level.

But LaVine is a different story.

A core in Chicago of LaVine, DeRozan, Lonzo Ball, Patrick Williams and Alex Caruso is a fun one. Chicago runs it back and doesn’t hesitate coughing up huge money to its star shooting guard.

This is one of the more interesting situations to follow heading into the offseason. After the Phoenix Suns shockingly decided not to pay 2018 No. 1 overall pick Deandre Ayton before the season began, questions are still bubbling under the surface on his long-term future with the organization. Ayton hasn’t let this impact his on-court performance though, as he's continued to be a two-way anchor to the Suns’ immense success. The Bahamian big man keeps proving his game is tailor-made for the postseason as well.

Will the Suns actually allow Ayton and his representation to test the open market as one of the top free agents available? It would be stunning, but it feels like we could be heading in that direction.

ESPN’s Adrian Wojnarowski has mentioned that, in negotiations, the Suns didn’t view Ayton as a max-level player at the time, which stunned many executives around the NBA. Has Phoenix’s stance changed after Ayton’s consistent performances throughout this season and the playoffs?

Here’s a little nugget: According to a league source, Phoenix is more than comfortable paying up and going deep into the luxury tax as long as its roster is competing for championships. Ayton is part of that puzzle, and 2019 lottery pick Cameron Johnson is eligible for an extension this offseason. Do with that information what you will, but it would truly be stunning to see Ayton playing elsewhere in 2022-23.