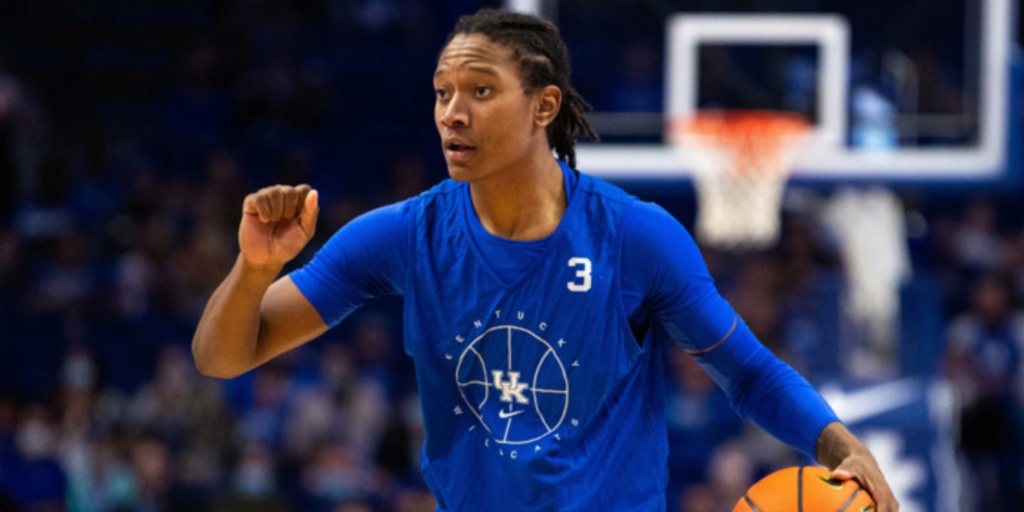 A lot of unusual things have been going on in the world in the last couple of years, and the same goes for the college basketball world too. Last season, most games were played in empty buildings without fans. Duke was bad, and Kentucky was worse. The Kentucky Wildcats had a 9-16 record last season. Yes, you read that right. 9 wins, 16 losses. Even writing that sentence out doesn’t feel right.

This past weekend, I visited Lexington, Kentucky to attend the Wildcats’ Blue-White game. Not only was Big Blue Nation back at Rupp Arena in full force with an attendance of ​​11,678, for a scrimmage, but the Wildcats’ team looked on par with what everyone would expect from them. John Calipari and his staff have done a terrific job of recreating their roster with a balance of young-stud freshmen and experienced transfers. I’m happy to say: Kentucky is back!

Although I enjoyed the sheer awesome environment of Big Blue Nation and Rupp Arena, I was in town for one main purpose, and that was to evaluate Kentucky’s NBA prospects. The Wildcats have a number of imminent and long-term NBA prospects, but I walked away most excited about one player. It's a player who I have crossed paths with before: freshman TyTy Washington from Phoenix, Arizona.

Last March, I evaluated TyTy Washington at a high school tournament, Flyin’ to the Hoop, in Dayton, Ohio. Following the tournament, I wrote:

"At 6-foot-3 or so, TyTy, although a good athlete, didn't blow me away with elite athleticism or any typical traits you generally see with top-tier prospects. However, his outside shooting, court vision, toughness and, most importantly, his floor presence did — he’s clearly a winner. TyTy was the floor general and set the tone for their team as they moved the ball, took great shots and supported one another.

"Walking out of the gym, my colleague, Derek Murray, and I looked at each other, both nodding in approval of what we had just witnessed. He asked me, “Who does TyTy remind you of?” I said, “He’s just a young kid and he needs to keep getting better, but he reminds me of Chauncey Billups.”

Yeah, I went there. I compared TyTy to a five-time NBA All-Star. I’m not going to deny that it was a bold thing to say. The similarities that I saw in his style of play compared to Billups were very clear to me, but I also thought TyTy’s upside was very high too.

Since then, I have seen TyTy play a number of times, and he’s continued to impress me more and more. However, my most recent trip to Lexington was my first time seeing him in Kentucky Blue. He did not disappoint, showing me everything I wanted and displaying all of the skills I mentioned from when I saw him in high school. But what stuck out the most was how comfortable he looked, as a true freshman, under the bright lights of Rupp Arena.

I find it interesting that a common narrative I’m seeing written by various journalists — and also have heard from NBA scouts that have attended Kentucky practices recently — is that “TyTy is a combo guard” or “he’s not a point guard.” Well, I respectfully, but completely, disagree with those labels.

Tshiebwe is a big man, but Wheeler is a 5-foot-9 point guard. Naturally, TyTy, who’s 6-foot-3 and 197 pounds, will play off the ball when he’s on the floor with Wheeler. They also have some guards that will likely come off the bench and play on the ball some too. Calipari clearly wants to utilize some lineups with multiple ball-handlers.

I’m not saying it’s a bad strategy by Coach Calipari for their team, but I think it has led to TyTy being mislabeled a bit. He is more than capable of being effective off the ball, as he is a terrific shooter and crafty scorer. He also can defend bigger players, as he is naturally strong, has long arms (6-foot-9 wingspan) and has good instincts. However, I think his long-term role in the NBA will be as a lead guard and floor general. He is a natural leader, is so cerebral and has a knack for making plays for himself and others when the ball is in his hands. I believe he will succeed this year regardless of how much he’s used as a traditional point guard or not. I’d prefer to see him in the driver’s seat, though.

When I evaluate players, I like to sleep on my thoughts and wind down after games before writing scouting reports or articles. This protocol allows me to process and organize all of the new information that I gathered the night before, properly. It also protects me from being irrational, as basketball games generate so much stimulation and emotion for me. So when I woke up in Lexington on Saturday morning, I asked myself: “Do we have TyTy Washington high enough on our Big Board?” He is currently No. 12.

Both players are hot on my radar. 👀 pic.twitter.com/7KDpANcHHI

In addition to TyTy, I was also impressed with freshman Daimion Collins from Atlanta, Texas. At 6-foot-9 and possessing a 7-foot-5 wingspan, Collins is so bouncy and athletic — he jumps out of the gym! He also surprised me by hitting several threes. I have seen Collins before in various high school events, but I didn’t realize he had outside shooting in his bag. That revelation certainly increases his value in my book, or at least solidifies it.

Collins is very thin, and I think he’s a ways away from being able to contribute at a high level in the NBA, but there’s a big difference between being ready to contribute in the NBA and being ready to be drafted in a solid spot. As of right now, my gut is telling me that Collins will be “draft ready” come June, as he has so much upside. Time will tell, but I’ll surely be tracking him closely throughout the season, regardless. We currently have Collins ranked No. 23 on our 2022 NBA Draft Big Board.

Another player who stood out at the Blue-White game was Oscar Tshiebwe, a transfer from West Virginia standing 6-foot-9 at a chiseled 255 lbs. Tshiebwe not only has incredible physical tools, but he also has a motor to match. He opened the night with a hustle play which led to an easy layup. He never slowed down after that, as he scored 25 points and grabbed 21 rebounds.

Oscar Tshiebwe’s motor was on from the jump and he never turned it off.

Tshiebwe is a big brute of a player, which is not generally a style that generates as much value as it did in years past, but I do think there’s a place for Tshiebwe in the NBA. I think he can be a roaming big who can provide physicality and energy. He has also shown an ability to hit an open shot, which is important.

I’ve gotten to know Oscar on a personal level. He is a great guy and the type of person I'd expect teams to want on their team. For as much that is working against Oscar in terms of style of play in the NBA, I think he will have a big year for Kentucky and will have a great opportunity to establish himself as a worthy second-round pick in the 2022 NBA Draft. We do not currently have Tshiebwe included on our 2022 NBA Draft Big Board, but I’m strongly considering including him in our next update.

The Blue-White game was my first time seeing freshman Bryce Hopkins from Chicago, Illinois. I have had a number of people contact me suggesting that I track him closely. The first thing that I identified when evaluating Hopkins was his physicality and toughness. Moving forward, my biggest question about Hopkins is this: Is he a big wing, a face-up 4 or a hybrid forward? I can’t say I have a good enough grip at this point to make any type of conclusive statement about him as an NBA prospect. I will say this, though — he’s on my radar.

All in all, I really enjoyed my trip to Lexington. As a lifelong basketball fan, it’s impossible not to appreciate the passion of Big Blue Nation and the history of the Kentucky program. My trip also proved to be very fruitful. I was able to gather a lot of valuable information about a handful of Kentucky’s prospects, which assists me as I try to sort out if and how each player could fit into the NBA.

As I mentioned before, last season was played without the energy of a crowd. Duke was bad, and Kentucky was worse. Well, that’s all changed this season. The fans, Duke and Kentucky are all back.

Not coincidentally, I will be starting the 2021-22 college season in proper fashion, at Madison Square Garden for the State Farm Champions Classic to see Duke vs. Kentucky.