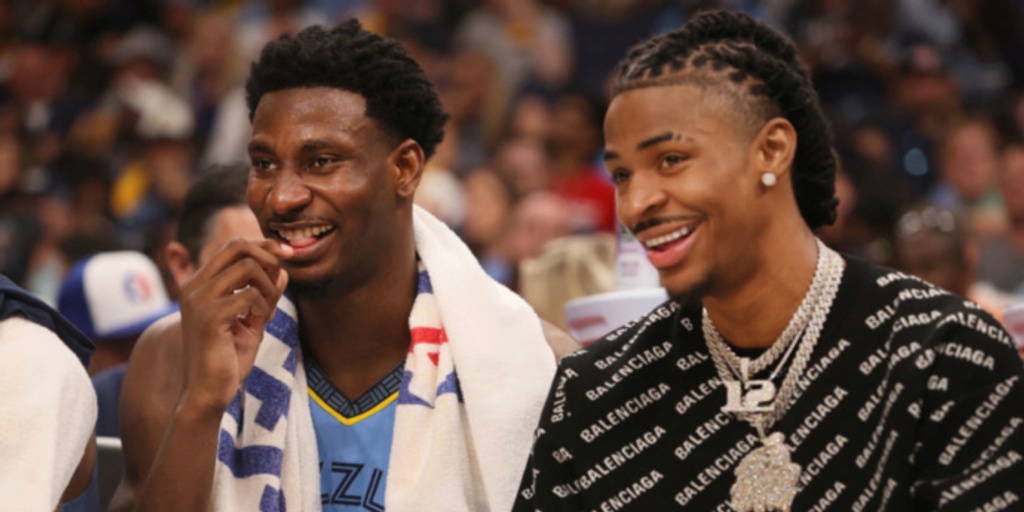 Despite missing Ja Morant, the Grizzlies can still defeat the Warriors

Everyone has seen the stat: The Memphis Grizzlies are 20-5 without Ja Morant.

It doesn't make sense... unless it does.

Are we gonna have a discussion about the fact that many of these beatdowns have happened without Ja Morant? Is there a discussion to be had?

The discussion is not about whether the Grizzlies are better without Ja Morant. They aren't.

They are different, and different in ways that give Memphis rightful hope that it has a puncher's chance at winning this series against the Golden State Warriors.

The Grizzlies have outplayed the Warriors for the majority of the series. Golden State is up 3-2 due to its experience closing out games versus the youth of Memphis. Game 4's ending is evidence that Memphis needs Morant, as the team could not create baskets down the stretch to stave off the Warriors' comeback.

So, without their superstar, how can the Grizzlies complete a 3-1 comeback? What's the formula?

The formula for Memphis in the regular season was defense leading to quick offense. The Grizzlies thrived on creating chaos and led the league in points off turnovers and fast-break points.

In Round 2, Memphis currently leads the NBA with 20.8 points off turnovers per contest. They are fourth in Defensive Rating (108.0), first in steals per game (10.6) and second in blocks per game (6.0). Another indicator of defensive intensity is a team's amount of deflections, a stat in which the Grizzlies lead the NBA with 16.0 per game in the second round as well.

In two games without Morant, Memphis has held the Warriors to an average of 98.0 points and forcing 19.0 turnovers per contest while amassing 32 total deflections during that span. Even more wild is the team's 94.7 DRTG without Morant in this series, holding the Warriors to a 49.1% Effective Field Goal percentage.

In the first two possessions of Game 5, the Grizzlies got exactly what they wanted from the Warriors — an Andrew Wiggins three and a Draymond Green three. Memphis is clearly forcing someone other than the Splash Brothers to try and beat them. In fact, the first five shots by the Warriors were by players not named Stephen Curry or Klay Thompson, and Curry did not take his first shot until there was 4:43 left in the first quarter.

At this point in the game, Jordan Poole had been struggling with his shot. Since Kevon Looney isn't much of an offensive threat, Steven Adams plays drop coverage and allows De'Anthony Melton plenty of space to navigate the screen. Dillon Brooks face-guards Curry while Jaren Jackson Jr. is in help position due to the non-shooting threat of Green. Melton is a plus-defender off the bench. and his wingspan creats havoc for opponents, as Poole experienced on this possession.

Memphis has made it quite clear that its game plan is to funnel the Warriors into the paint. When Green is playing on the perimeter, it allows Adams to cut off the backdoor plays, forcing Thompson into a baseline jumper rather than a layup while having the step on Tyus Jones.

Jackson blitzes Curry on the screen, forcing Curry to get off the ball making a soft pass to a rolling Nemanja Bjelica. Jones gambles by leaving Thompson and gets the steal, but its the positioning of Desmond Bane and Adams that matters.

Again, Adams is 15 feet away from Green while Bane vacates Wiggins in the corner. Both are in help, and Memphis will either live with a Wiggins three or recover and rotate if the ball were kicked to Green on the perimeter.

In the two games without Morant, the Grizzlies have made life incredibly difficult for Curry, Thompson and Poole.

Meanwhile, Poole and Green have combined for 15 turnovers alone during the two games and 37 in the series. Green has more than doubled his total turnovers from the first round against the Denver Nuggets.

Memphis must continue creating chaos on defense and scoring off turnovers in order to have a chance without Morant.

Simply put, the Warriors do not roster a player who can guard Jaren Jackson Jr. when he is not settling for perimeter shots. It has been an interesting case study when it comes to the offense of JJJ with and without Morant.

The strength of Ja is getting downhill and attacking the rim; therefore, Jackson must not be occupying that space. JJJ floats around the perimeter for catch-and-shoot opportunities way too often when Morant is on the floor. So it makes sense that Jackson shoots 3.7% better when Morant is not playing, because he gets to the rim more often.

A contributing factor to the team's Game 4 loss was Memphis failing to get the ball to JJJ down the stretch, as he shot just four times in the final eight minutes. Jackson has to be the featured guy for this team to have any hope of advancing.

Just call it what it is for the Warriors attempting to guard him. Memphis obviously drew this up to look for Jackson early on a post-up on the young and undersized Jonathan Kuminga. A key to featuring a player is getting him looks early. Look for the Grizzlies to do much of the same in Game 6 (and potential Game 7).

Thompson has certainly lost a step and is not the perimeter lockdown defender he once was; the 7-foot Jackson is able to get by Thompson on the perimeter, forcing a Klay foul to prevent an easy bucket. As long as JJJ does not resort to only going left when he is headed downhill, he can put immense pressure on the Warriors' defense.

Memphis has run this action multiple times for both Jackson and Bane, and should continue to do so. When Jaren has it going from deep, it is a massive game-changer for the Grizzlies in any game. Memphis needs a repeat performance from Game 5 Jaren.

Bane has been dealing with a bulging disc in his back. The Warriors have obviously game-planned to render Brandon Clarke ineffective on the offensive glass. Melton is still a wild card, and Brooks has been a hot mess.

In order for the Grizzlies to survive and advance, Bane has to be lethal, Clarke needs to be active on the glass, Melton has to show up and Brooks needs to play within himself. In Game 5, those things happened for the most part.

This should tell you that Bane is closer to 100%. In the previous meetings, he was mostly limited to spot-up shooting. His ability to put the ball on the floor and turn the corner is crucial for Memphis' offense.

Clarke got loose in Game 5. After four games of focused boxing out on BC, the Warriors allowed him to make a massive impact on the offensive glass. Clarke was the biggest X-factor in the first round for Memphis, and will need the same level impact going forward.

Melton can be very hit or miss offensively. If he hits his first shot, watch out, because he is about to go on a binge. If he misses the first few, his minutes get cut rather quickly. Melton is a player who thrives off chaos on the defensive end, constantly deflecting balls, blocking shots and racking up steals. His ability to defend off the bench is key for the Grizzlies.

Its a long shot, but the Memphis Grizzlies are capable of coming back from a 3-1 deficit — even without their superstar. Can the Grizzlies stay locked in and play exceptional basketball for two more games?

Obviously, many things have to go right — but they did in Game 5.