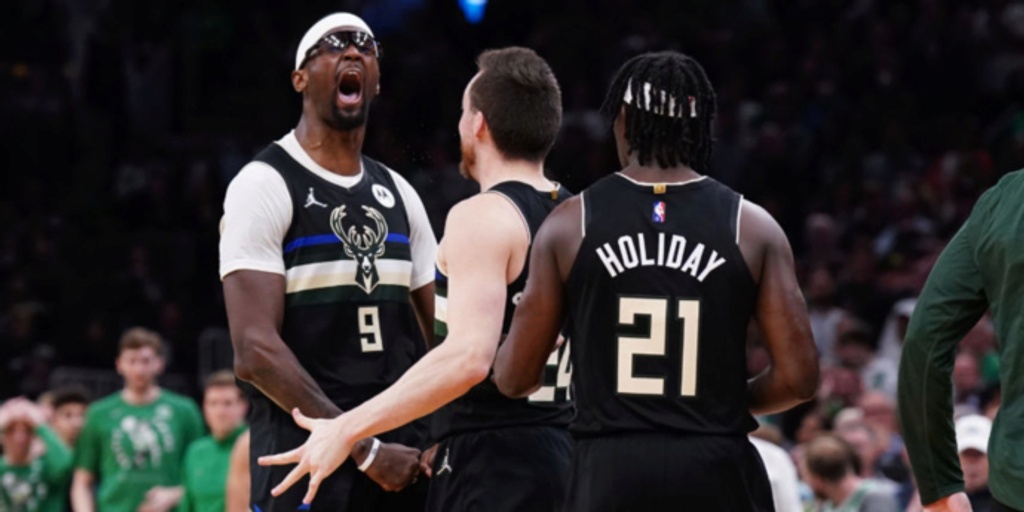 NBA Stats Notebook: What did the Bucks find on offense in Game 5?

During the first three quarters of Wednesday's Game 5 between the Boston Celtics and Milwaukee Bucks, I had already outlined today's column in my head. The Bucks have boasted some of the worst offensive numbers this postseason, they looked miserable again in Game 5, and, unless something changed, their second-round exit would be a foregone conclusion.

And then, the fourth quarter happened — or more specifically, the last 10 minutes changed the course of the series and this article.

Milwaukee trailed 93-79 and scored 31 points in 10 minutes — more than any other full quarter this game — to stun the TD Garden crowd and break the series tie in a 110-107 thriller. The cumulative 33 points in the fourth quarter is the second-highest total the Bucks have managed in any frame this series.

Jrue Holiday's late-game defensive wizardry became the signature moment of the night, and the Celtics' offensive meltdown drew the ire of its fan base on social media. But the "coming back" part of the comeback, in which Milwaukee altered its offensive narrative, was overshadowed. So let's spolight it.

For some context, the Bucks' offense has been dreadful most of this series. This was the half-court state of affairs entering Game 5:

The Milwaukee Bucks are averaging just 84.1 points per 100 possessions in the halfcourt this series, per Cleaning the Glass.

That’s the lowest of any 2nd round team and is far below any rate posted in the regular season.

The Bucks could only generate momentum in transition, where they sprinted all over the Celtics to the tune of 142.3 points per 100 possessions. Several viewers, including Nekias Duncan and Steve Jones Jr. of The Dunker Spot, lamented the Bucks' tendency to find an offensive advantage and promptly forget to utilize it. And while I don't feel fully confident that they've put such woes behind them, Wednesday night provided a potential blueprint for offensive success.

The surge begins on this play, where Milwaukee consistently creates advantages with constant movement. You can see that the Celtics have prioritized containing the paint and are shading off of both corners. The Bucks only need one screen to keep the defense in rotation, and no one stops moving after the pass. By the time Holiday attacks Al Horford's closeout, he could pass to any teammate and find an open shooter.

Pat Connaughton has been lights-out in this series, making 48.0% of his 5 three-point attempts per game. He can shoot the ball from a bizarre load point well above his head when he needs to, but he's also explosive enough to attack closeouts and make defenders pay, as he did in the above possession.

Here's another play where off-ball activity from Wes Matthews results in Connaughton getting a three-pointer from a handoff. Matthews cuts into the paint, and Grant Williams and Horford both prioritize his cut over Connaughton's spacing. They don't communicate on a potential switch, and it leads to a late chase from Williams.

Exhibit C: Holiday steers toward the painted area and the Celtics collapse off of the corners. This time, it's Matthews reaping the rewards as Holiday hits him for an open three. At this point, you're starting to see the pattern. The Bucks went 6 of 6 from long range in total, but these moments in particular hint at a weakness in the Celtics' defense. When the Bucks found the corners and moved the ball too quickly for Boston to communicate, they found open looks.

One more clip. This one is a miss, but it's undoubtedly a high-quality shot from Bobby Portis. He gets the open layup because the Bucks have gone completely five-out. Portis ghosts (or slips, depends on your judgement) the screen and cuts right to the basket. It catches Horford off-guard for a split second as he anticipates a switch. Connaughton feeds Portis, and he can then either lay the ball up or make the extra pass to Matthews in the corner.

The Bucks went with two notable lineups to fuel this comeback. First, it was Holiday-Connaughton-Matthews-Allen-Giannis Antetokounmpo. Then, Portis checked in for Allen and that remained the unit for essentially the rest of the game. Brook Lopez did not play in the fourth quarter. George Hill played one minute and 52 seconds. The lineups matched smaller Celtics units and allowed the Bucks to play faster on offense with more driving threats.

Portis particularly proved pivotal. He simply feasted on the glass against the smaller Celtics in that fourth quarter. Milwaukee outnumbered Boston 7 to 1 on the offensive glass in the fourth quarter. Portis grabbed 4 himself — including the game-swinging missed free throw — and had more offensive rebounds (7) than the Celtics (5) in all of Game 5.

Collectively, the Bucks seem to have struck some type of gemstone. They'll either continue to have corner opportunities, or they'll force Boston to respect the space, allowing more driving and cutting chances for Antetokounmpo and others. They also capitalized on the toll of communicating in a switch-heavy scheme, and used their size to their advantage. However, Milwaukee isn't running home free.

Holiday remains the ultimate offensive swing player in this series. He came up with some stone-cold shots late in the game that masked another sketchy night where he scored 24 points on 24 attempts. It's been a brutal series on the scoring front.

Holiday has shot just 32.6% from the floor when driving to the basket in the second round, which is extremely poor. He's making 34.5% of his pull-up shot attempts with a 41.4% Effective Field Goal percentage. Holiday is one of 23 players with over 20 total possessions in isolation this postseason, per Synergy; his mark of 0.65 points per possession ranks 20th among those players. He's drawn criticism on some of Milwaukee's gunky plays that end with low-quality pull-up attempts. We'll see what adjustments he makes in Game 6.

The Celtics also missed Robert Williams III for second straight game due to knee soreness, which dramatically changed the equation and allowed the Bucks to play with the small lineup they had. What happens when he returns and adds stability on the glass and as a rim-protector?

Even after last night's victory, Milwaukee still ranks last among second-round teams in passes (232) and potential assists (33) per game. That doesn't have to be a negative, but it does reinforce our eye test that too many possessions have involved rushing into an Antetokounmpo or Holiday drive without utilizing the space on the court.

The battle to force defensive adjustments has been the most captivating aspect of this series to me. Just a week ago, I wrote about how Boston's shooters are forcing the Bucks into tough decisions. Now, the script has flipped to the other side of the court, and with the series now in elimination mode, the stakes only grow.

The most efficient offensive players in the #NBAPlayoffs: pic.twitter.com/bDTcrD2NSv