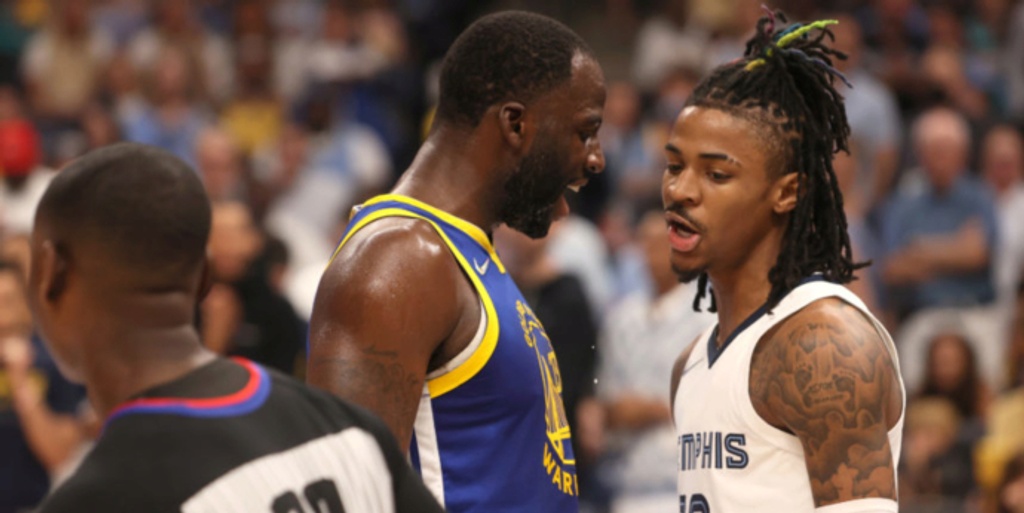 Can the Grizzlies overcome their youth against experienced Warriors?

The Memphis Grizzlies did not lose Game 1 against the Golden State Warriors because Ja Morant missed a layup.

Game 1 was a result of a young coach leading an even younger team against a proven franchise led by a seasoned, dynastic trio in Stephen Curry, Klay Thompson and Draymond Green.

The key to Memphis winning this series?

In the first round, the Grizzlies were the team taking advantage of the wildly inexperienced Minnesota Timberwolves, overcoming three different double-digit, fourth-quarter deficits to win the series in six games.

With eight minutes left in the fourth quarter of their second-round series opener on Sunday, the Grizzlies found themselves down double digits again, but the confidence was there. They've already proved they are resilient and capable of storming back, which they did.

The difference this time? An opponent with over 500 games of playoff experience on its roster. While Memphis was able to defeat Minnesota via three comebacks, Golden State did something it has always done: Respond.

This is a trend to watch throughout the series. If Memphis gets down and storms back, can it do the little things to win those games? Or will the experience of the Warriors win out?

When looking for this trend, there has to be some identifiers that point towards the youth of Memphis, and in Game 1, there were a few examples.

One indicator of youth can be found in shot selection.

All season long, Memphis thrived by attacking the paint and second-chance points. During their comeback in the fourth quarter, the Grizzlies had seven straight possessions that resulted in a three-point attempt. In that four-minute span, they shot 2 of 7 from deep, only scoring from the free-throw line and one layup off on an offensive rebound. Although they outscored Golden State in that stretch, settling for perimeter jumpers was a failure to capitalize on their turned up defense.

Another indicator is careful attention to detail.

Thompson left the door wide open, missing two free throws with 6.7 seconds remaining in regulation. It would have been a one-possession game no matter the result, but it was winnable for Memphis. All the Grizzlies had to do was rebound the second miss.

The difference between Memphis getting that rebound and calling a timeout from the resulting jump ball was roughly three crucial seconds.

Multiple lapses happen here for the Grizzlies. Thompson missed the original three-point shot for a lead, only for Andrew Wiggins to gather the offensive rebound. Memphis gets caught ball watching and is slow on its rotations, leading to a wide-open Curry three.

Steph misses another opportunity to put the Warriors up, only for Wiggins to get another offensive rebound in an attempt to tie the game on a tip. He misses the tip, yet the Grizzlies still can not come down with the rebound. The tie-up leads to a jump ball, which ultimately gives the Warriors possession. The very next play, Thompson hits the game-winning three off an inbound play.

In the final minutes, Memphis was beat by its own medicine, allowing three offensive rebounds that led to two massive Golden State second-chance buckets.

Communication in crunch time is another thing that can fail a young team.

Upon first glance, it looks as if Ja Morant was ball watching and lost track of his man. From the beginning, Ja was actually matched up with Jordan Poole, and it was Brandon Clarke who was ball watching. It appears Clarke never had sight of his assignment (Gary Payton II), and assumed due to his position in help that Poole was the next man in rotation. By time Clarke realized the mix-up, it was too late, and the game was tied.

The mistakes of youth are not just attributed to the players on the court.

Grizzlie head coach Taylor Jenkins will have to grow alongside his team if there is any hope for Memphis to reach just the second Western Conference Finals in franchise history.

There is no question about his ability to keep his guys locked in despite deficits, and his ATOs are top notch, but his learning curve has to deal with managing rotations. Playoff rotations shrink for a reason. Although Memphis boasted a deep squad in the regular season, guys like Steven Adams and De'Anthony Melton were essentially cut from the rotation altogether in Round 1.

Though the Grizzlies avoided the foul trouble they ran into against the Timberwolves, Jenkins deployed 10 men in Game 1. Perhaps it was due to the one day's rest between these series, but Memphis saw success in the prior round when shortening the rotation.

For example, Jaren Jackson Jr. was in a groove that Memphis desperately needed to see from him.

jaren jackson jr is the only player in nba history to have a playoff game with at least 30 points, 6 made 3-pointers and 6 offensive rebounds

More importantly, Jackson only had 3 fouls and was never considered to be in foul trouble at any point in the game. Yet, he only played 30 minutes in a game where he was virtually unstoppable. With no Draymond Green on the floor, JJJ was a mismatch for the Warriors, and should have seen the floor more.

Even more perplexing was Jenkins' decision to sub out Melton rather than Dillon Brooks for the final three minutes of play. Brooks had 5 fouls and was 2 of 12 shooting prior to the substitution, while Melton was causing problems all over the floor; he produced 14 points, 7 rebounds, 3 steals and a block.

Melton is the same level of a perimeter defender with a quicker first step, making him better suited to guard guys like Poole and Curry. His activity on the night, plus his scoring, should have warranted his stay on the floor. The decision comes down to Desmond Bane and Brooks. And on nights where both may be struggling in terms of scoring, you would prefer Bane's presence, as it only takes one shot to change the game (i.e., Thompson's game winner).

Memphis is going to have to grow up fast in order to knock off the veteran Warriors team standing in its way. From shot selection to late-game attention to detail, Morant and Co. will have to lock in at an even deeper level of execution, while Coach Jenkins and his staff will have learn what rotations are going to put the Grizzlies in the best position to win.

This series features two of the top teams in the NBA at different moments of their championship windows.

If the Grizzlies want to help close the Warriors window early, they'll have to overcome their youthful mistakes and grow up in front of a national audience.