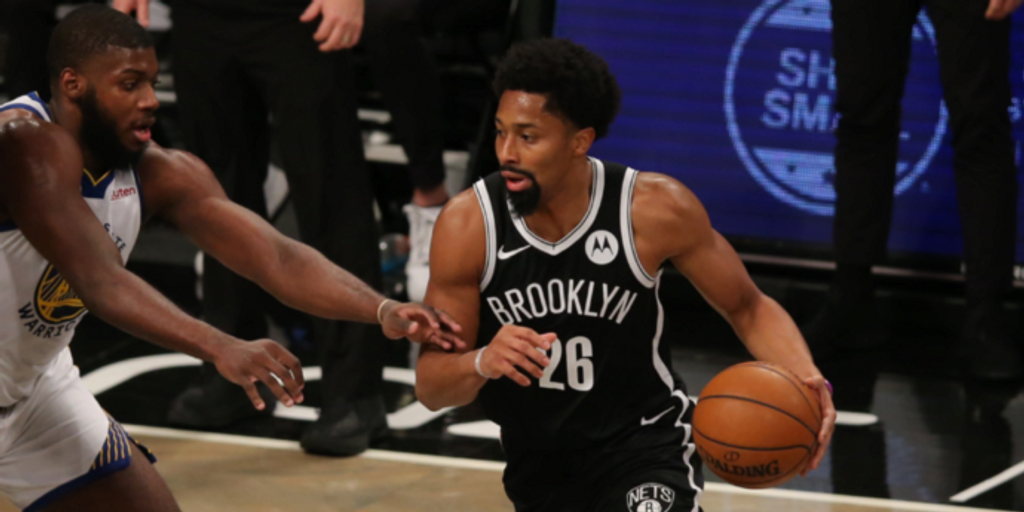 The Catalyst: Why Spencer Dinwiddie should be a coveted free agent

The bedrock of any fruitful offense is a player who generates advantages, and is either adept enough to capitalize individually or surrounded by teammates capable of doing so. As such, Spencer Dinwiddie, despite missing most of the 2020-21 campaign after tearing the ACL in his right knee, should be one of the most coveted free agents in the NBA this offseason.

Dinwiddie is a premier advantage creator. His 2019-20 showing underlined his value to an offense, as he averaged 20.6 points, 6.8 assists and 3.5 rebounds on 54% True Shooting percentage. Kevin Durant’s year-long absence and Kyrie Irving’s injury struggles left the Brooklyn Nets low on initiators. That thrust Dinwiddie into an outsized lead ball-handling role, though one that enabled him to exhibit the depths of his entire game and illuminate why he’d provide considerable impact to potential suitors moving forward.

According to Synergy, only 11 players logged more isolation possessions than him in 2019-20. Despite the mammoth volume (205 possessions), he ranked in the 69th percentile in points per possession (0.951), which was seventh among the 12 players meeting that threshold. James Harden, Damian Lillard, Kawhi Leonard, Luka Doncic, Chris Paul and Jayson Tatum were the only players to finish above him. Dinwiddie blends both usage and production in a manner emulated by a select number of preeminent offensive orchestrators.

The foundation of his isolation excellence is a standstill burst accompanied by a mastery of pace. His 0-60 acceleration is elite. He regularly burns defenders with sudden tweaks of tempo and explodes out of dribble moves or changes in direction, while maintaining leverage by getting lower than opponents. Bigs caught on an island are ruthlessly exposed; by controlling the cadence in ball screens, he forces these desirable matchups. At 6-foot-5, he overwhelms opposing guards and varies his stride length to cover ground as he deems appropriate. He’s technically savvy and athletically gifted, rendering him a high-level isolation scorer.

Contriving buckets out of thin air is a rare and critical commodity in the NBA. Fitting that criteria is Dinwiddie, who also sat near the top of the league in pick-and-roll possessions two seasons ago. Over 48% of his offense came via pick-and-rolls and he was in the 61st percentile. (His 667 pNr possessions slated fifth overall behind Trae Young, Donovan Mitchell, Lillard and Doncic).

Factor passes into the equation and his 1,286 possessions were fourth, good for the 62nd percentile at 0.974 PPP.

Using high ball-screens against a drop-coverage big is his forte. He loves side pick-and-rolls, and is particularly dangerous when rejecting the screen to scoot downhill with a head of steam. His footwork gifts him the shiftiness to shimmy around or perplex rim protectors and find space to finish. He’s entirely comfortable embracing physicality, ramming into the chest of big men to score. The change of pace and quickness remain boons. He craftily primes screens with his handle, body angles and dexterity.

Commandeering such substantial workloads and conserving relatively efficient numbers is a skill in itself. The volume signifies a malleable approach to creation that prevents defenses from keying in one certain tendency and eliminating it to curtail functionality in those actions. Pick-and-roll initiation is typically central to offense, as is individual creation. Dinwiddie offers both to many teams lacking those traits in a free-agent class short on star talent.

All of this works because he’s one of the NBA’s best downhill guards. According to Cleaning the Glass, his 38% rim frequency ranked in the 74th percentile, and he shot 60% around the basket (59th percentile). Not only is Dinwiddie manufacturing a ton of quality looks, but he’s also converting at an above-average rate. It’s one thing to create those shots; it’s immensely more valuable to be equipped to score effectively there.

Part of what makes him such a multifaceted downhill threat in ball screens and isolation is his capacity for drawing fouls. Among 35 players to average at least 20 points per game in 2019-20, his .437 free-throw rate ranked eighth behind Joel Embiid, Harden, Giannis Antetokounmpo, Zion Williamson, Anthony Davis, Doncic and Young.

He seeks out and anticipates contact. An overzealous/poorly-timed stunt or brazen hand-check will be seen by the officials. Any misplaced limb is a death knell for defenders. He is unafraid to charge directly toward a big man, absorb the hit and draw a pair of foul shots. Sometimes, his tricks end poorly and the upshot is an errant heave toward the rim. But largely, he parades to the charity stripe with ploys emblematic of Young and Harden’s chicanery.

As a passer, he touts live-dribble faculty and marvelous placement on lobs, and probes in the paint for drop-off feeds. He can seamlessly rifle skip passes in pick-and-rolls, guide big men into space on alley-oops and instantly transition from dribble to pass. His advantage creation is amplified because he preserves those advantages, occupying defenders cognizant of his speed and pace manipulation.

Among the top-30 players in total assists in 2019-20, just Westbrook (93%) and Harden (92.4%) had a higher percentage of their assists resulting in threes or shots at the rim than Dinwiddie (92.1%), according to PBPStats. The dude catalyzes highly valuable shots for others, and does so through advanced means.

There are, however, bouts of overly audacious lobs. In general, his decision-making can drift too much toward being premeditated. He’ll zone in on a certain read, whether it’s deciding between passing and shooting or different passing options, and not deviate from it when needed. Traps are prone to flustering him.

The premeditated tendencies, in conjunction with his poor off-the-bounce shooting, is the foremost factor standing between him and top-tier initiator status. He shot just 29.2% on pull-ups in 2019-20 and 33.7% the year prior. His willingness often skews too confidently or timidly. Defenders sag off to mitigate driving lanes.

As Dinwiddie hits the free-agent market, his struggles to scale into a larger off-ball role really blur things. Despite the passing, driving and self-creation intersection, he’s not good enough to spearhead elite offense because of the shaky jumper. That wouldn’t be much of an issue for his future employer if he was comfortable in a secondary role.

Theoretically, a 6-foot-5 guard with viable off-ball shooting, versatile passing, foul-drawing guile and burst should function well in a complementary spot. Dinwiddie, though, prefers to dictate the action on his terms. He’s methodical when the ball swings his way and gun shy on spot-up chances, even though he’s drilled a reasonable 37% of his catch-and-shoot triples (176-for-476) since 2017-18. That mark should be lucrative enough to provoke consistent close-outs and open lanes to the paint. Flashes of him puncturing a titled defense as a driver exist.

Assessing his value through the prism of a new team -- the Dallas Mavericks, Washington Wizards or New Orleans Pelicans, for example -- each franchise rosters a (super)star better qualified to be the No. 1 offensively. Dinwiddie in a condensed role is useful, but brings diminishing returns. An upgrade in offensive talent compared to the 2019-20 Nets could spur a retooled style from him. It’d likely be necessary to maximize his opportunities.

The one team presenting a clear fit without a well-established, superior perimeter creator is the New York Knicks, a logical marriage for both sides. While the Knicks could stand to sign more shooting, what they truly require is a perimeter advantage creator who is better than Derrick Rose. Dinwiddie would be that.

Dinwiddie would help relieve Julius Randle’s cumbersome usage by increasing the first-time All-Star's pick-and-pop or short-roll reps, while turning the latter's mid-post isolations into a feature rather than a staple. His slashing would empower RJ Barrett and Immanuel Quickley to serve as practical second-side handlers against compromised defenses. He and Mitchell Robinson would harmonize in pick-and-rolls.

On the other end, New York should house much of the infrastructure to insulate Dinwiddie. He is not an abjectly terrible defender, but he is also not good, existing somewhere between those broad endpoints. Inactivity defines his imprint, and he has a habit of floating for long stretches. That is not necessarily bad on its own, but his impact is felt mostly through negative occurrences — though not abundantly.

Dinwiddie struggles around screens. Ball-handlers achieve dribble penetration against him because he’s a bit weak, passive and slow laterally at the point of attack. When he plays with physicality, he can pose issues for creators and deny or top-lock assignments off the ball; those instances are irregular though.

He’s also behind the curve with off-ball positioning and rotations. He will make many of the necessary decisions — a closeout, splitting the difference between weak-side shooters, stunt-and-recovers — but the execution might fall short. That dichotomy produces inconsistent outcomes. At other times, he’s just harmful as an off-ball defender, losing sight of his assignments.

Brooklyn’s personnel tasked Dinwiddie with guarding an array of offensive stars. He’s not a bottom-rung defender. Periods of physicality, while anomalous, transpire on and off the ball. A context conducive to off-ball deployment — shadowing guys with his size and physicality to neutralize screens or pinning him to the least threatening creator — would mitigate his shortcomings.

The Knicks could probably provide that and enable him to remain the principal perimeter handler. They would vastly benefit from his offensive services and he would benefit from their defensive core. The pairing is sensible.

Gauging a player is closely tied to discerning their strengths and weaknesses, recognizing the value of each and ranking them. Dinwiddie’s most prevalent strengths — advantage creation and capitalization — are vital for team-building. His most prevalent weaknesses — offensive scalability and on-ball defense — are well down the list of damning issues.

Soon, a team will sign him. That team will almost assuredly improve offensively because of his addition and be quite satisfied. The gems of this free agency class are scarce, but Spencer Dinwiddie is one of them.