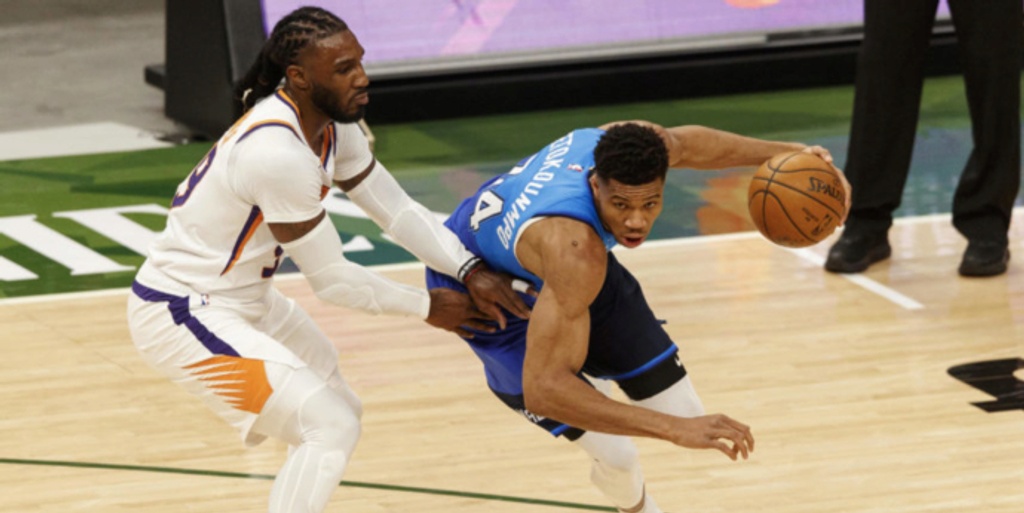 The 2021 NBA Finals are set: Bucks-Suns should be interesting

The two regular-season games between the Milwaukee Bucks and Phoenix Suns this season fit the same script. Both were extremely high scoring. Both went down to the wire. Both saw Phoenix win by a single point, with a free throw by Devin Booker ending up as the game-winner each time.

There was also this: Giannis Antetokounmpo couldn’t be guarded in either game.

And now, it’s the Bucks and Suns — forever tied together after Milwaukee won a 1969 coin flip after the teams’ first seasons for Lew Alcindor — in the NBA Finals, with Antetokounmpo’s status a major question.

The NBA’s title series is set: Game 1 between the Bucks and Suns will be in Phoenix on Tuesday night, the last matchup of this compressed season that navigated its way through the coronavirus pandemic, players and coaches testing positive for COVID-19, and a slew of injuries to some of the game’s biggest stars — Antetokounmpo and Phoenix’s Chris Paul included.

Paul is back, set to play in the NBA Finals for the first time in his career.

Antetokounmpo can only hope to be that fortunate.

The two-time NBA MVP averaged 40 points on 60% shooting against the Suns this season, but hyperextended his left knee during Game 4 of the Eastern Conference Finals against Atlanta. The Bucks went 2-0 in the two full games that Antetokounmpo missed to win that series in six games, eliminating the Hawks in Atlanta on Saturday night and earning the team’s first NBA Finals berth since 1974.

“We’ve got more work to do,” Bucks coach Mike Budenholzer said during the East trophy ceremony.

The Bucks advancing to the NBA Finals means USA Basketball will be more than a bit short-handed when it starts Olympic training camp in Las Vegas on Tuesday. The U.S. has a 12-man team for the Tokyo Games — and three of those 12, the Suns’ Booker and Milwaukee’s Khris Middleton and Jrue Holiday — will be otherwise engaged for the next few days.

Game 7 of the NBA Finals, if the series goes the distance, would be July 22. The Olympics open July 23 and the first U.S. game in Tokyo is July 25 against France. USA Basketball will arrange to get Booker, Middleton and Holiday to Tokyo as quickly as possible if the American team leaves for Japan while the finals are still happening.

“It could be worse,” USA Basketball managing director Jerry Colangelo said. “I guess one option is we’re going to have nine players for the first game against France. That’s the worst-case scenario.”

No player on either team has ever won an NBA championship. Nobody on the Bucks' roster has ever appeared in the NBA Finals; Milwaukee is hoping to join the 2015 Golden State Warriors as recent teams that won the championship despite having zero Finals experience.

The Suns have only one player with previous NBA Finals experience: Jae Crowder, who went to the Finals with Miami last season. Then, he chose to sign a three-year deal with Phoenix last offseason.

“I knew our potential,” Crowder said. “I knew where we could get to, the level of basketball we could play, when I first got here. I just knew it was a special group. I knew we had a chance to do something special.”

The Suns indeed have that chance.

One of them is only four wins from hoisting the Larry O’Brien Trophy.