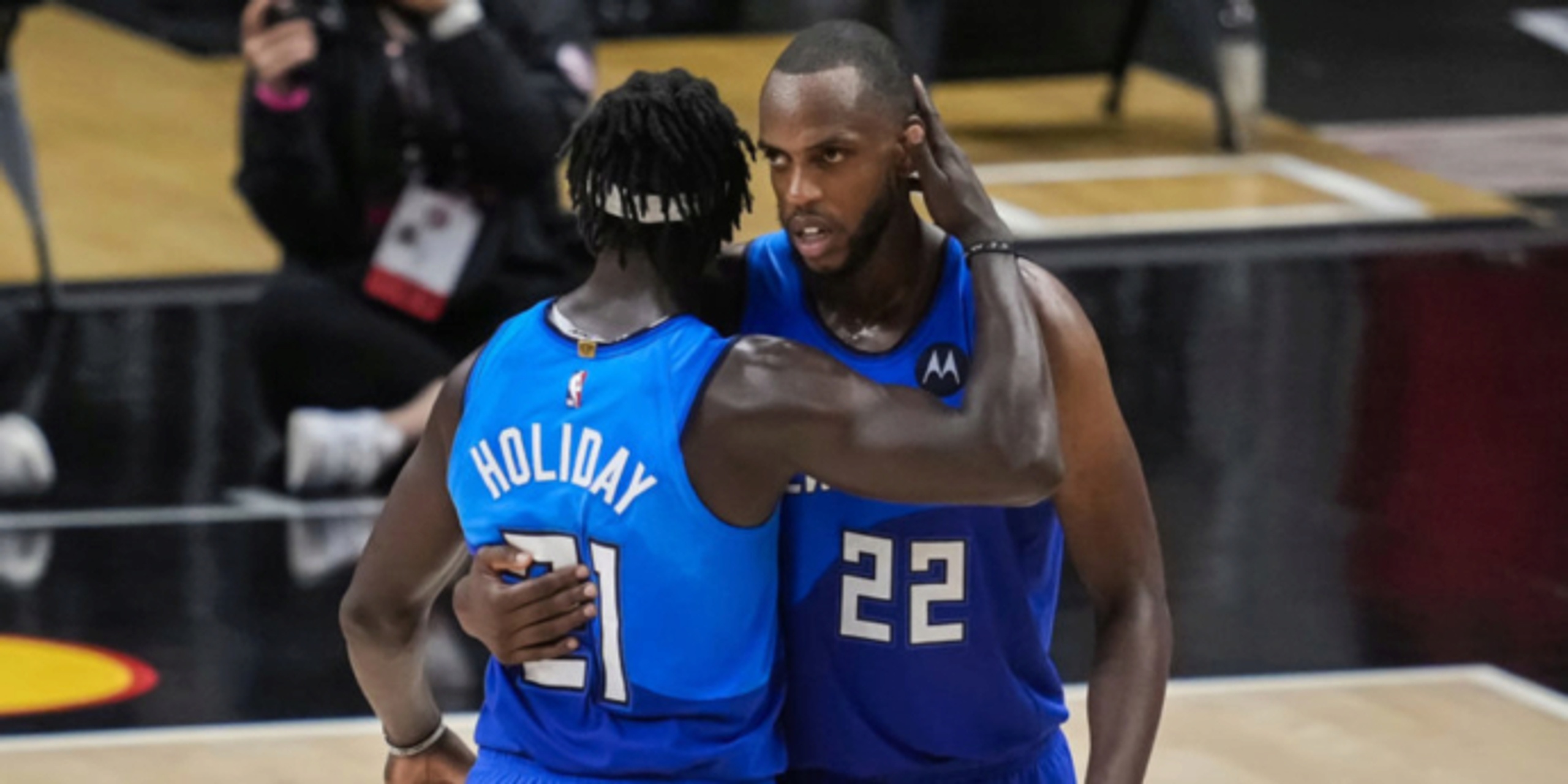 Taking a long shot at Bucks coming back behind Holiday, Middleton

History is not on the side of the Milwaukee Bucks. Of the 35 teams that have lost the first two games of the NBA Finals, only four came back to win the championship. That is a mere 13.4% success rate.

But it is not a 0% success rate, and we have already seen Milwaukee come back from an 0-2 deficit in the second round against the Brooklyn Nets. So it can be done, which was the operating principle behind taking a drive across the New York-New Jersey border on Friday evening to drop $40 into the sinkhole known as the legalized U.S. sports gambling industry.

Giannis Antetokounmpo has been the Bucks’ one and only star during the first two games of the series, but there are – at least in theory – five games left. That means there is an opportunity for other Milwaukee players to rise to the occasion and be the catalyst for four victories over the remainder of the series, and the time to wager on them for NBA Finals MVP is when their odds are highest.

With that thought in mind, $20 went on Khris Middleton at odds of +6000 (60-1) and another $20 went on Jrue Holiday at +10000 (100-1). Only three games will be played over the next seven days, and that gives Giannis Antetokounmpo more healing time for his hyperextended knee. He has been fantastic in Milwaukee’s first two games, but those games were losses. And if a different player steps up and becomes the difference-maker in four Bucks wins, that will be a determining factor in whether someone other than the Greek Freak (currently +400) becomes the Finals MVP.

As Saturday begins, the favorites are Chris Paul (-143) and Devin Booker (+200). Friday was a travel day, so we will get an update on everyone’s status at some point today. The guy whose comments will be interpreted most closely is Bucks coach Mike Budenholzer, who reportedly was a dead man walking back when the Bucks were down 0-2 vs. Brooklyn.

Will he shake up his starting lineup and go big by inserting Bobby Portis as he did in Games 5 and 6 against the Atlanta Hawks? And if he is planning to do so, will he show his cards prior to tipoff?

And most importantly, will he change some of his offensive schemes to provide more shot opportunities for his secondary stars, Middleton and Holiday?

Middleton shot 12-for-26 in Game 1 for 29 points, but just 5-for-16 in Game 2. Holiday was 7-for-22 in Game 2 after going 4-for-14 in Game 1. One of them has to become a consistent second scorer while also adding something on the defensive end, and since Holiday was an All-Defensive-First-Team selection, his 100-1 odds were most enticing.

Let’s not forget that he was the player who defended Kevin Durant at the end of the epic Game 7 of the Nets-Bucks series when Durant airballed a three-pointer with 0.3 seconds remaining in overtime and the Nets trailing by two. Somebody needs to do something better against Paul, who was brilliant in Game 1 — with 32 points and nine assists — and nearly as efficient in Game 2 — with 23 points and eight assists (along with six turnovers, tying his season-high).

And even if Budenholzer gets Holiday to force Paul into a sub-par game, the next concern is finding a way to defend Booker, who has scored 27 and 31 in the first two games, knocking down seven three-pointers in Game 2 after going only 1-for-8 in Game 1.

It is very much a “pick-your-poison” type of situation for Budenholzer when figuring out how to defend Phoenix’s guards. And then there is the matter of defending Deandre Ayton, who went 8-for-10 and had 22 points and 18 rebounds in Game 1 and then came back to earth with 10 points and 11 rebounds in Game 2. Also, Mikal Bridges has been the unsung hero for the Suns over the first two games: 14 points in Game 1 and then 27 points in Game 2. He has not missed a single one of his 10 free throws.

Antetokounmpo’s knee remains a question mark, and there may come points when the Bucks are going to have to get things done without him. That is all the more reason to take a couple of $20 flyers on Middleton and Holiday when their odds are so high, as unlikely as it seems that the Bucks can come back from 0-2 without their best player having a significant role.

The last team to come back from an 0-2 deficit to win the finals was the 2016 Cleveland Cavaliers, who were down 0-2 to Golden State but won the series in seven games. Previously, the 2006 Miami Heat did it against the Dallas Mavericks, winning four straight. (The others were the 1977 Portland Trail Blazers and the 1969 Boston Celtics).

And if you think things look bleak for the Bucks, a history lesson is in order. In the 2016 Finals, the 73-win Warriors jumped to a 2–0 lead in the series and recorded the largest combined margin of victory (48) through two games in NBA Finals history in the process. Cleveland won Game 3 at home, 120–90, but Golden State bounced back to take Game 4. The rest is history. The Cavaliers won the next three games, becoming the first team in NBA Finals history to overcome a 3-1 deficit.

The 2006 Heat lost the first two games on the road and were down 13 points with six minutes to go in the fourth quarter of Game 3 but rallied against Dallas. They then won Game 5 in overtime, as Dwyane Wade shot 25 free throws, making 21. And the series ended in Dallas when Wade scored 36 points and Miami rallied from a 14-point first-half deficit to win Game 6.

The Lesson: Even when things look hopelessly bleak, things can change. And so while the Bucks look dead in the water, this series will not be over until somebody wins four games.

In the sports gambling universe, the way to get paid is to latch onto a key player at a ridiculous set of odds and hope for the best. Chances are that if the Bucks win, Giannis will get all the credit. He remains the third choice on the board at DraftKings sportsbook at +400, followed by Ayton at +1600.

But Middleton had superb outings in Games 3, 4 and 6 against the Hawks and in Game 1 against the Suns, starting to change the narrative regarding whether he is a better regular-season player than postseason player. And Holiday, who cost a king’s ransom for the Bucks to acquire from the Pelicans, is not going to continue to shoot 31.6% from the field and 16.7% from the three-point line. He had four fantastic games against the Hawks, and one must figure that his chamber is not empty.

If the Bucks lose Sunday, stick a fork in them because they will be done.

No NBA team has ever come all the way back from an 0-3 deficit. But if the Bucks win at home, we are not going to see these types of prices on Milwaukee players (Brook Lopez is currently +30000, as is P.J. Tucker). Bobby Portis, who can be inserted into the starting lineup if Budenholzer wants to put a pair of big men on the court together as he did in Games 5 and 6 against Atlanta and try to force the Suns to match up, is +50000.

We are two games in. There could be five games left. And while it looks as though the Suns are unstoppable, the Warriors looked that way five years ago; and the Mavs a decade before that.

It ain’t over yet.