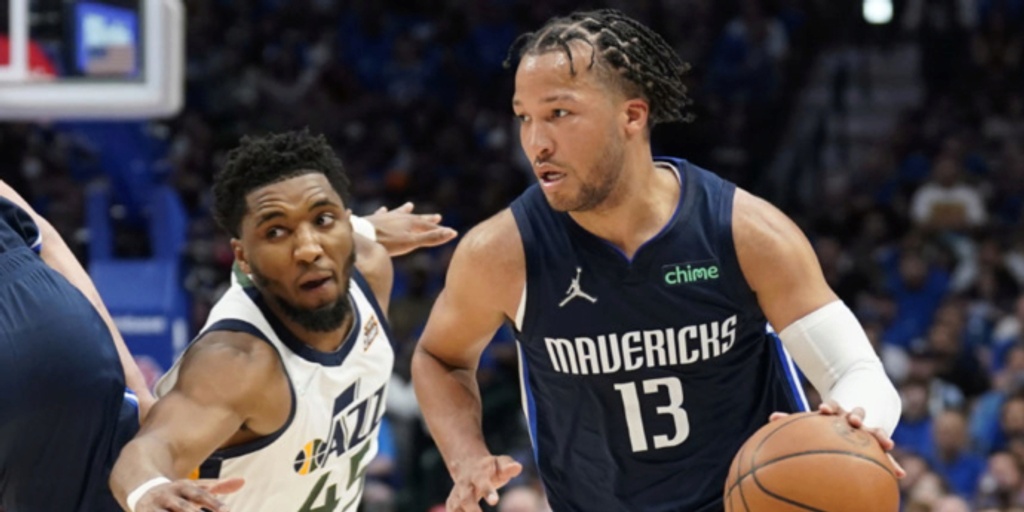 With nearly a full month of NBA playoff action in the books, we've witnessed a handful of players surprisingly exceed expectations and drive their league-wide value to increasingly high levels. On the other end of the spectrum, several stars have seen their market price dip quite a bit.

So whose stock has soared? Whose has plummeted? Let's dive in with an in-depth breakdown.

Heading into the 2021-22 season, the Dallas Mavericks could have signed Jalen Brunson to a four-year, $56 million extension. However, ESPN's Tim MacMahon reported that the Mavs chose not to make an offer and didn't even engage in negotiations with Brunson's representatives. You have to assume Dallas is now regretting that decision.

After averaging career-highs in scoring (16.3 points), assists (4.8), rebounds (3.9) and steals (0.8) during the regular season, Brunson has taken his game to another level in the playoffs. With Luka Doncic sidelined early on in the Mavs' first-round series vs. Utah, Brunson got off to a scorching hot start, tallying 96 points, 16 rebounds and 16 assists over the first two games. He became just the third player in NBA history to tally at least 70 points and 10 assists while committing fewer than 2 turnovers over a two-game span in the postseason. Incredibly, Brunson led all players in total points scored in the first round (167).

After struggling a bit in the first two games of Dallas' first-round series vs. Phoenix, Brunson was again a crucial factor in the Mavs' victories at home in Games 3 and 4 over the weekend.

Through 10 postseason contests, Brunson is averaging 23.5 points, 4.6 boards and 3.9 dimes per game. He's done most of his damage by relentlessly attacking the rim. Among all postseason performers, Brunson ranks third in drives per game (behind only Ja Morant and Doncic) and third in points scored off drives.

WHAT A NIGHT FOR JALEN BRUNSON!

It could be argued that no player has boosted his stock more over the past few weeks than Brunson. And it couldn't come at a better time for the versatile combo guard, who will become an unrestricted free agent on July 1. We know the New York Knicks are interested in making a run at Brunson, and according to Marc Stein, Detroit and Indiana have shown interest as well. However, Mark Cuban has stated publicly he plans to re-sign Brunson — even if it has an outsized impact on Dallas' luxury tax bill.

Due to a slew of serious injuries that limited him to only 88 games over the past three seasons, Victor Oladipo was forced to settle for a one-year deal with Miami on the veteran minimum back in August. The hope was he'd be able to show teams during the 2021-22 campaign that he was finally fully healthy. Unfortunately, Oladipo was sidelined for nearly all of the regular season as he recovered from a debilitating right quadriceps injury. 'Dipo didn't make his season debut until March 7.

After playing sporadically in late March and early April, Oladipo exploded for 40 points in the Heat's regular-season finale. Yet, he was a DNP-CD in each of Miami's first three playoff games. However, with both Jimmy Butler (knee) and Kyle Lowry (hamstring) ruled out for Game 5 of the Heat's first-round series vs. the Atlanta Hawks, Oladipo slid into the starting lineup. He finished that contest with 23 points (8 of 16 from the field, 4 of 4 on free throws), 3 assists, 3 steals, and 3 triples in 36 minutes. Needless to say, 'Dipo has been a part of the Miami rotation since. In Game 2 of Miami's second-round matchup vs. the Philadelphia 76ers, he tallied 19 points, 6 rebounds and 3 triples. He also chipped in 15 points off the bench in Game 4.

Oladipo will undoubtedly have plenty of interest on the free-agent market this summer.

Al Horford's 2022-23 salary is only partially guaranteed. And when the Celtics initially acquired Horford last summer in a trade with the Oklahoma City Thunder, some pundits speculated that Boston might look to get out from under the $26.5 million owed to Big Al next season.

But with as well as he has played this postseason, that will no longer be a consideration. Horford has been a godsend for Boston, averaging 15.9 points, 9.4 rebounds, 2.8 assists and 1.1 blocks per contest through the Celtics' first eight playoff games. In Game 3 vs. Milwaukee on Saturday, Horford became the first player in Boston's franchise history with at least 20 points, 15 rebounds, 5 assists and 4 made three-pointers in a single playoff game. Then, in Monday's Game 4 victory, he exploded for 30 points, 8 rebounds, 5 triples and 3 assists.

Rumors of a rocky relationship between Donovan Mitchell and Rudy Gobert have been swirling for years. Unfortunately for Utah, it appears the team will be forced to trade one of its two best players at a time when their respective values have depreciated.

The two pillars of the Jazz franchise played relatively well during the regular season, but the rumblings of toxicity in Utah grew louder as the year dragged on. Mitchell not sharing the ball with Gobert has become a topic of conversation in early April. Shortly thereafter, Gobert called out his teammates for not wanting to play physically and "get our hands dirty." When asked about the perceived finger-pointing, Mitchell characterized it as "childish."

Utah backed into the playoffs after losing five straight games in late March, but was hoping to take advantage of a Mavericks team playing without its best player, Doncic, who was sidelined by a calf injury for the first two contests. However, the Jazz lost Game 2 and lost the series in six games.

Over the six-game series vs. Dallas, Mitchell averaged over 22 field-goal attempts per contest, but shot just 39.8% from the floor and 20.8% from downtown. He became the first player in league history to attempt more than 20 field goals but shoot below 40% from the field and under 21% from three-point territory over a postseason run. And Mitchell's poor defense was arguably more problematic than his offense. Utah allowed over 115 points per 100 possessions vs. Dallas with Mitchell on the court. That number dropped to 104.5 with Mitchell on the bench.

As well as the Donovan Mitchell responses to 2 separate questions a day later: pic.twitter.com/irKTufQJ1L

Gobert averaged just 12.0 points per game on 5.5 attempts per game (a career-low in his six postseason appearances) and blocked a total of 6 shots in the six-game series. It was the first time in his career he averaged more turnovers than blocks and steals combined. The Mavs often attempted to take advantage of Gobert's difficulty covering the perimeter by going small and spreading the floor.

Dating back to the 2021 postseason (when they dropped four straight to a shorthanded Clippers team that lost Kawhi Leonard to an ACL tear), the Jazz have lost 8 of their last 10 playoff games. With Gobert, Mitchell, Mike Conley, Bojan Bogdanovic, Jordan Clarkson and Royce O'Neale locked into contracts that will pay them north of $133 million in guaranteed money next season, Utah won't be able to make any significant upgrades via free agency.

Last week, it was reported that Gobert had reached a "him or me" point with Mitchell and would demand one of the two be traded this summer. It's difficult to envision the Jazz entering the 2022-23 season with both Gobert and Mitchell on the roster.

As noted above, Oladipo has stepped in and stepped up for the Heat over the past two weeks. On the flip side of the coin, we have Duncan Robinson, who has gone from a crucial contributor to a non-factor.

Robinson started all 72 games for Miami in 2020-21, averaging 13.1 points and 3.5 rebounds while shooting 40.8% from beyond the arc (on 8.5 three-point attempts per game). The Heat rewarded him with a five-year contract worth $90 million. However, Robinson regressed during the 2021-22 regular season, as his production and percentages dipped. After starting 68 of the team's first 72 games, he was bumped to the bench in late March. Following a solid outing in Game 1 vs. Atlanta, coach Erik Spoelstra clearly didn't feel comfortable trusting his sharpshooter. Robinson averaged just 2.3 points in 10.7 minutes per contest in the final four games of the first round.

Remarkably, Robinson has logged a total of just 55 seconds thus far in Round 2, and has been a DNP-CD in 3 of the 4 contests. This is obviously not what Pat Riley and company had in mind when they ponied up $90 million less than nine months ago.

With $74.5 million still owed to Robinson over the next four years, will Miami look to dump his contract this summer already?

As I detailed in this space last month, the Nets are on the precipice of a difficult decision.

Kyrie Irving has a player option worth $35,328,700 for the 2022-23 campaign. If he declines his option, he would be eligible to sign a new five-year deal with Brooklyn worth up to $248 million. While Kyrie is still capable of playing at an incredibly high level, the Nets have to decide how much he's worth considering his injury history (since signing with Brooklyn in 2019, Irving has appeared in just 103 of 216 regular-season games) and the off-court drama he brings to the table.

In the three years since Brooklyn added Kevin Durant and Kyrie, the Nets have won just one playoff series. This past season, Nets owner Joe Tsai spent $266 million in salary and luxury tax payments, the second-highest amount in league history. The Nets don't have a single playoff victory to show for it.

And over the team's final three games in the first round, Irving averaged just 15.3 points while shooting a putrid 37.2% from the floor and a frigid 18.2% from downtown.