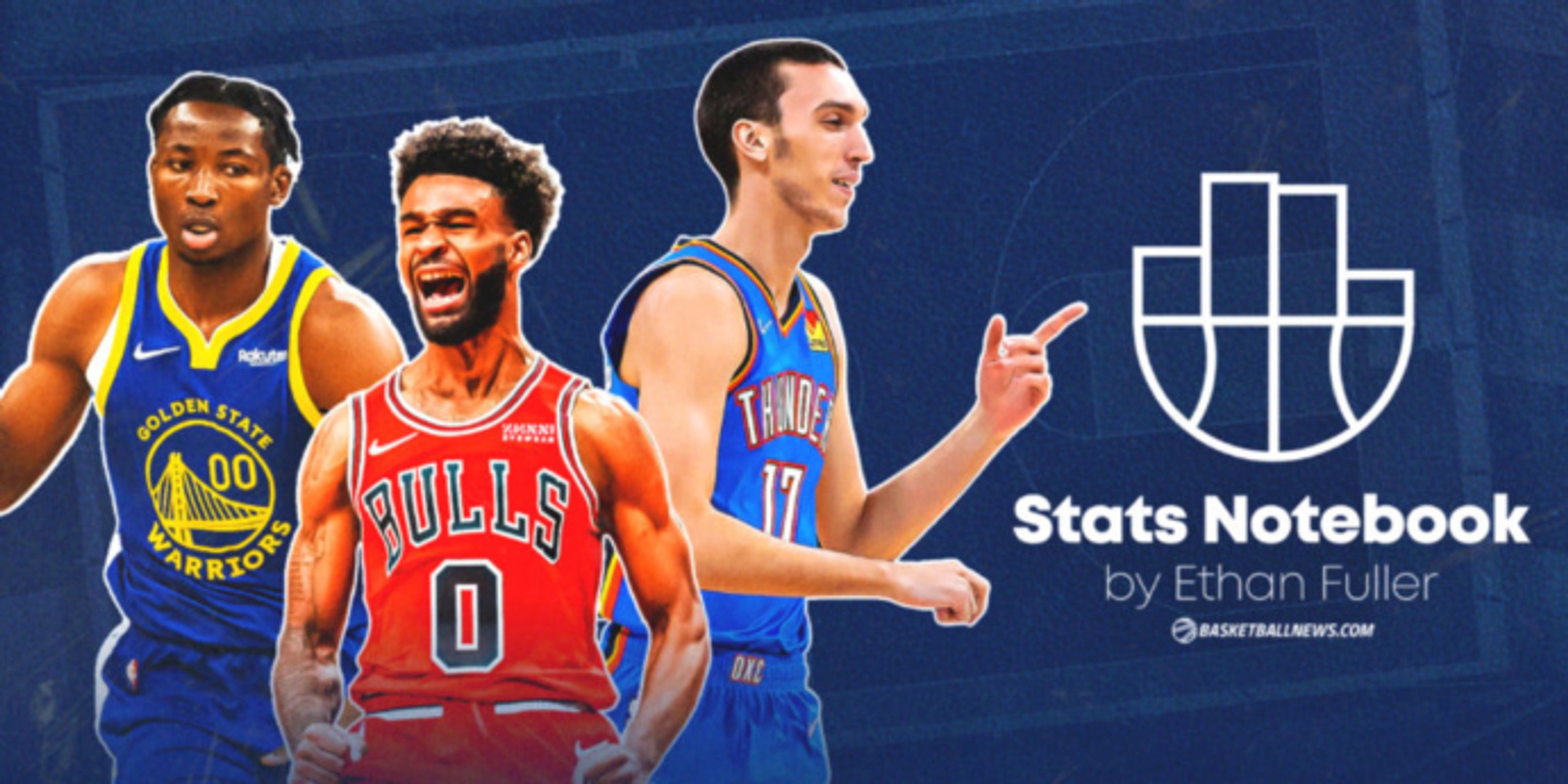 Stats Notebook: 3 NBA prospects who are quietly figuring things out

The NBA learning curve is different for everyone.

It took Giannis Antetokounmpo four years to win the Most Improved Player award that signaled his rise to stardom. Cameron Payne was all but finished in the league before he signed with the Phoenix Suns and emerged as a key contributor in the team's run to the NBA Finals last season. Andrew Wiggins is an All-Star and a core piece for the Golden State Warriors; he needed six years and two changes of scenery to get there.

Development takes time. And while those trendy, eye-popping "leap" moments are exciting, the blossoming often overshadows the buds that precede. Watching a young player start to fit the pieces together before the final puzzle takes shape is one of the true joys of being immersed in basketball.

Dozens of NBA talents are in the budding stage. Three have caught my eye on the spreadsheets and on the screen, and I'd like to highlight their promising growth while they still fly under the radar.

When the Warriors drafted Jonathan Kuminga and Moses Moody in the lottery, I (and likely several others) presumed the latter would be the first to stamp his presence in the rotation. Moody is showing promise in the G League, but it's Kuminga who has made the leap so far. He's quite literally cutting open his niche on one of the league's best teams.

Since Feb. 1, the No. 7 overall pick has averaged 14.6 points in just over 25 minutes per game. He's been a terror inside, making 73.7% of his shots within 5 feet of the basket. Those looks typically come off some spectacular cuts and finishes.

Jonathan Kuminga is really showing his smarts off the ball. You can see him recognize Anthony Davis is going to rotate over as the pass to Kevon Looney goes up and then he immediately cuts hard. Being able to read and react this quickly is awesome pic.twitter.com/hyWmii8vp0

According to Synergy, 13.6% of Kuminga-involved plays include cuts. He's making an impressive 70.5% of his cutting field goals. The spatial awareness and timing on some of these are simply jaw-dropping for a rookie in an offense that requires constant off-ball focus. Kuminga is a simply nasty dunker too.

The thunderous dunks and full-speed finishes make up most of Kuminga's rookie highlights. However, he's quietly hitting a respectable 37.9% of his catch-and-shoot threes over the past month as well. He's not nearly a polished offensive player yet; Kuminga has logged more turnovers than assists in every month this season, and isn't a pull-up threat. However, his NBA-ready cutting and finishing already make him an asset off of the Warriors' top creators.

Kuminga's game was supposed to be a long-term investment. He doesn't turn 20 until October, and appeared extremely raw in his first pro stint with G League Ignite last season. For him to already be a rotation-caliber contributor is just one of the many pleasant surprises with this year's Golden State squad.

Aleksej Pokusevski might have been the single worst NBA player in 2020-21. His season was extremely poor on both ends, and outside of a couple of late-season outliers, Pokusevski rarely looked poised doing much of anything on the court.

Prior to February, the 20-year-old had been in and out of the active rotation this season with similar struggles, and spent time with the G League affiliate OKC Blue — where he still didn't play well.

That's what makes the past month so interesting. In 10 contests since Feb. 1, Pokusevski is averaging 10.8 points and 6.4 rebounds in 24.5 minutes per game while shooting 40.0% from long range. It's been by far the best 10-game stretch of his young career.

There are a few layers to his improved efficiency. Pokusevski has made 38.7% of his catch-and-shoot threes and appears in rhythm off the catch. However, per Second Spectrum tracking data, he's also 9 of 16 (small sample size alert) on shots where he's taken 3-to-6 dribbles. He's finishing 62.0% of his attempts at the rim, per Cleaning the Glass; while it isn't anything to write home about, it's also 10 percentage points better than his rookie year.

In this reel alone you will see:

Since Feb. 1, Pokusevski has logged a 12.8% turnover rate (about league average), down from a ghastly 16.4% rate up through the end of January. He's also logged a 2.6% block rate on defense, which ranks in the 80th percentile among bigs, and a 1.6% steal rate (78th percentile). Pokusevski still has defensive lapses, but the activity appears to be way up, and he scarcely commits fouls.

We're setting some low bars with Pokusevski, and that's okay. OKC is playing the longest of long games by developing an extremely skinny, 7-foot microwave playmaker. Year 2 was about seeing if he could turn flashes into NBA-caliber skills, and over the last month, Pokusevski seems to be catching up. He still doesn't turn 21 until December. The Thunder have plenty of time to be patient with their super-ceiling prospect as he works through the complexities of the NBA.

White appeared to have been lost in the Bulls' radical offseason upgrades with Lonzo Ball, Alex Caruso and DeMar DeRozan joining the fold. Where would the 2019 seventh overall pick fit in as a score-first guard on a roster with at least four other guards and wings ahead of him in the pecking order?

But the 22-year-old has not only settled — he's thriving with less pressure to lead the offense. White's usage rate is a career-low 20.1%, per Cleaning the Glass, but he's averaging 116.5 points per 100 shot attempts — in the 83rd percentile among combo guards.

White has been on a heater since February, making a scorching 48.7% of his threes with a 62.4% True Shooting percentage. Despite moving in and out of the starting lineup as Chicago battles injuries, he's appeared unflappable. White is drilling 42.3% of his catch-and-shoot threes this season, up 6% from last year, and taking more of those shots than ever.

The synergy is palpable between White and DeRozan. Per the NBA's tracking data, White received 13.6% of his passes from the new Bulls star in February (second-most on the team behind Nikola Vucevic) and knocked down a whopping 63.6% of his three-pointers that came off a DeRozan dish.

His job is straightforward: get in an open spot on the perimeter, be ready when DeRozan draws help and make the shot. Some of these plays might look simple, but notice how DeRozan doesn't hesitate to dish it off when he sees defenders collapse away from White, and White doesn't hesitate with his quick trigger.

Chicago has lessened the creation burden on White; 64.7% of his made field goals have come off an assist this season compared to just 50.7% in 2020-21. It's resulted in a serious efficiency boost.

White is trending away from being that prototypical lead guard fans may have expected when the Bulls initially selected him; there's nothing wrong with that. He's showing that he's still a valuable piece to Chicago's long-term future by blending his offensive game with the stars on the roster.

Connecting on difficult shots is an invaluable skill in the #NBA. Here’s a look at the league’s deadliest marksmen on heavily contested jumpers: pic.twitter.com/vcCEXHiTJO