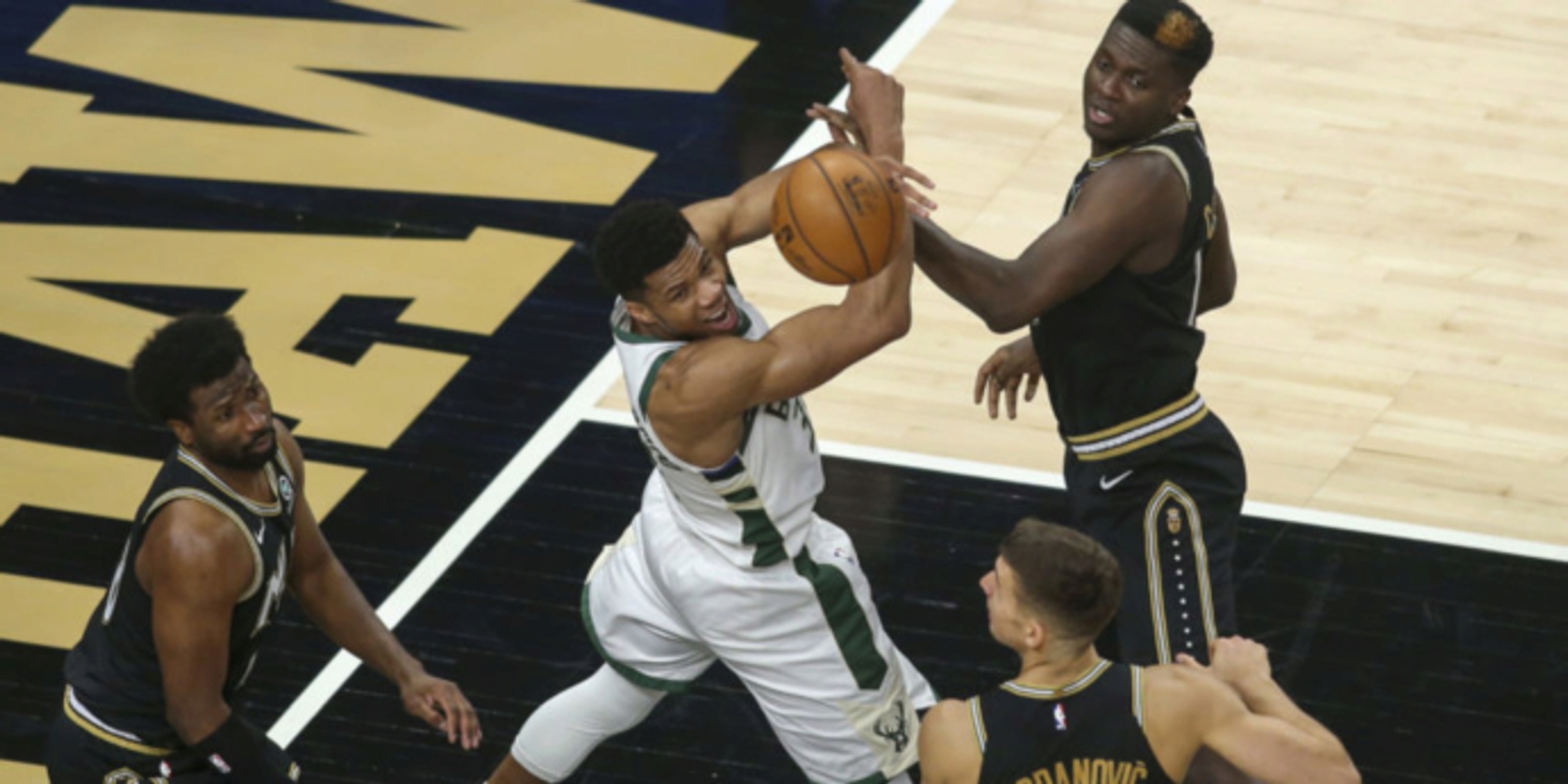 Scouting Report: How the Hawks can stop the Bucks

I'm not sure who could've predicted this Eastern Conference Finals.

On one side, the Milwaukee Bucks are seeing the fruits of their switch-it-up labor. They've tinkered all year long in preparation of this postseason. They mollywhopped the Miami Heat in round one. They then snatched defeat from the jaws of victory, before snatching victory anyway in a seven-game slugfest against the Brooklyn Nets.

On the other side are the Atlanta Hawks, a team that didn't look playoff bound midway through the season due to injuries, roster instability, and coaching turmoil. The firing of Lloyd Pierce, and the subsequent hiring of Nate McMillan, jumpstarted their turnaround. They proved to be too prolific for the New York Knicks in round one, and too resilient for the Philadelphia 76ers in round two.

Without further ado, let's look at how the Atlanta Hawks will try to stop the Milwaukee Bucks.

The Hawks have a decision to make with the frontcourt. Do you go with Capela on Giannis to start, considering he's the most physically equipped to deal with him? Or do you start with Collins as an innings-eater of sorts, and have Capela roam off of Lopez to muck things up if necessary?

I think I'd choose the former option, understanding the foul trouble risks that come with it. Slowing Giannis down should be priority number one. Not only is Capela better equipped to do that, Collins does have solid weakside rim-protection chops. He's also faster than Capela, so he should be able to help in the paint and scoot out to Lopez on the perimeter with a little more ease.

Top Priority on Defense: Make it a Half-court Affair

If you look at the personnel for each team -- specifically, who the stars are -- you'd likely think of the Hawks as a run-and-gun squad, while the Bucks profile as a grind-it-out, beat-em-up half-court. It's pretty much the opposite.

No team pushes more than the Bucks, with nearly 18% of their possessions starting in transition, per Cleaning The Glass. While Giannis is a battering ram in the half-court (more on that shortly), he's at his best when long-striding in the open floor. He drives the transition attack, figuratively and literally.

Giannis ranked in the 85th percentile when operating as the lead ball-handler in transition; when filling the "trailer" role, that bumped up to the 91st percentile per Synergy. There are few things scarier in the NBA than that guy coming with a full head of steam.

The proverbial "wall" has been talked about ad nauseam over the past couple of (post)seasons, but it's imperative to get back and cut off the middle of the floor. Making Giannis navigate in close quarters is the best way to slow him down. He's nimble for his size, but he isn't guard-level slithery.

Of course, it isn't just Giannis. Jrue Holiday is not only good at pushing in transition, he adds value as an early seal threat. He's a big man in a guard's body in that way, willing to leak out early and either put smaller defenders on his hip, or to lurk around the dunker spot for dump-offs.

It may not be safe to play the offensive rebound game; getting back and cutting off easy opportunies should be of higher importance.

Giannis is one of the most dominant rim threats the NBA has ever seen. He's been a monster this postseason, averaging [checks notes] 29-14-5. Okay then.

He's been working on counters all season long. Some of that is quicker decision-making -- the passes on drives are coming a beat earlier than last season, for example. Some of that is adding to the shot repertoire. Post hooks, step-in middies, and turnarounds are all shots he has shown more comfort getting to.

There's no way to stop this guy. Slowing him down, and hoping his extremely poor luck from the free throw line (48.3% vs the Nets, 53.8% overall) carries over, will go a long way to swinging the series.

The same principles that apply in transition -- taking away the middle, being active with your hands on the drive -- also apply in half-court situations.

Giannis attempting to add half-court counters to his game is fine. Ultimately, his primary method of attack can be devastating enough to render those counters useless.

It's hard to overstate just how strong this dude is. He has no issue doing his work early, putting a guy on his hip and setting up shop on either block. His backdowns create genuine space. Once he gets to the restricted area, you're pretty much dead. He'll nudge you off-balance with fakes or, if they don't work, simply extend his never-ending arms to get a good look.

That's not a bad rep from Danilo Gallinari, who actually bumps Giannis off his spot on the catch. Three dribbles and a head fake later, Giannis is taking a shot two-and-a-half feet from the basket, if that. That's how tough it's going to be.

The key to hindering Giannis in the half-court is doing your homework early. Building the "wall" is an easy example, particularly when he's isolating above the break. When he isn't at the center of the court, pinching in early will be necessary to making him work. 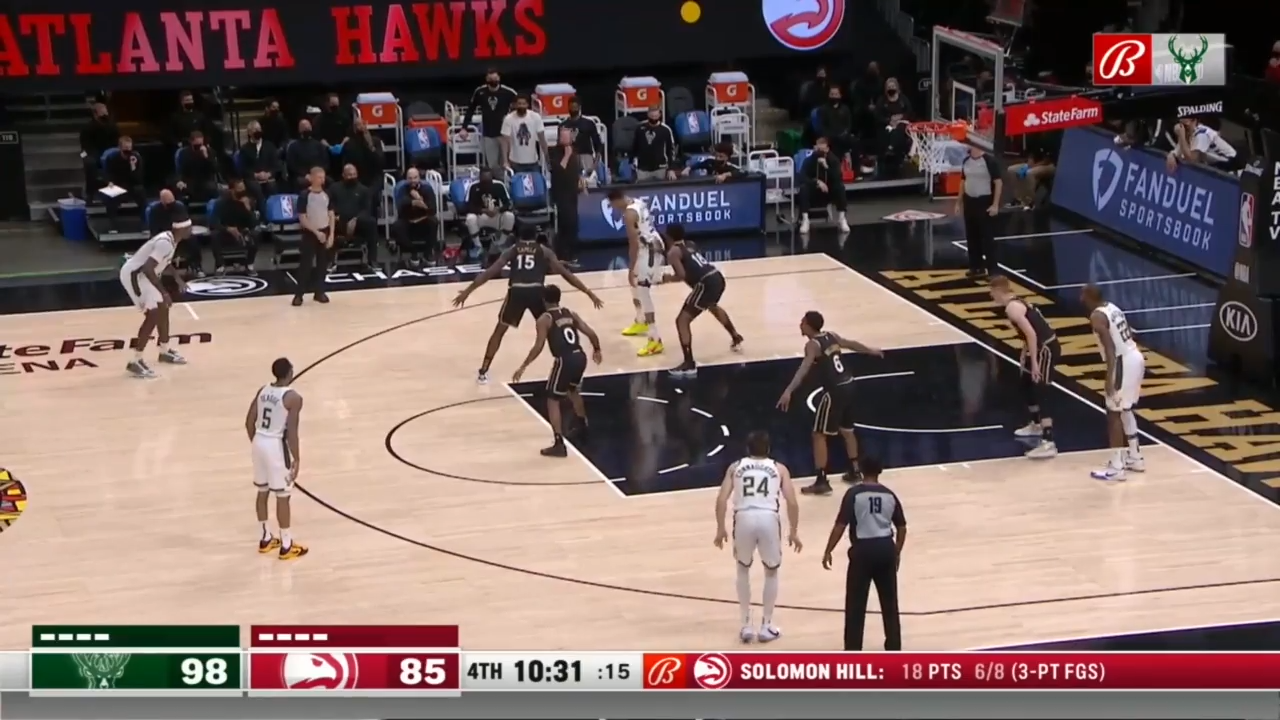 It's not a hard double from Capela, but he's pulling in early from one pass away. He's trusting that he can get out to Bobby Portis for a contest if necessary. Brandon Goodwin is at the nail. Lou Williams has his toe at the edge of the paint. The only place Giannis can go is to the baseline.

Giannis won't always settle for that -- you saw what he did in the clip against Gallinari -- but you bump up the odds of him settling if you restrict his space.

As far as actual doubles, timeliness will be key. He's no Nikola Jokic, but he's also a step above Joel Embiid as a passer in terms of ability and willingness. The Bucks generated nearly 1.3 points per possession when Giannis passed out of a post double this season, per Second Spectrum.

Show the hand too early, and he'll make the right play.

If you're able to blindside him a bit, wait for him to begin his move or get into his gather, you may be able to fluster him. Take this rep for example.

Bogdan Bogdanovic comes over to the right elbow once Giannis starts his post-up, but doesn't commit until he drives to the baseline. As that happens, Capela pulls in to cut off the dump-off pass to Portis. Behind that, Williams sinks down to the opposite baseline to take away a potential kick to the corner.

This is the blueprint.

As a bonus: whenever Giannis is starting a post-up or an isolation with a lefty drive, make sure there's someone ready to pinch in to the middle of the floor. The left-to-right spin is his go-to move in close quarters (while the eurostep is more of a transition weapon).

As another bonus: if you're going to pinch in to bother the spin, fully commit to that sucker.

Bogdanovic doesn't sink quickly enough, nor does he reach in with any fervor. This is one heck of a move by Giannis, but it's still a help-defense failure.

PJ Tucker: Let him fire above the break, soft close-out in the corners

Beyond Giannis, Holiday may be the most important Buck in this series.

He'll have to hound Trae Young for a majority of his minutes on the defensive end. I don't have to explain why that's important. If the Bucks come out in a deep drop, Young may need to dig into the foul-drawing bag to get Holiday out of there.

Don't sleep on Holiday's offensive importance either. Unlike 6'8 Khris Middleton, Holiday likely won't be at a size advantage against whoever defends him (likely Kevin Huerter). He'll be needed as a genuine shot creator, particularly when Giannis is off the floor.

Holiday can do it; he generated 1.07 points per possession on isolations during the regular-season series, per InStat tracking data. It's always a risky proposition once Holiday gets into his pull-up bag, but it adds another dimension to his, and the Bucks', attack when he has it rolling.

Frankly, dare him to knock down isolation pull-ups. Duck under picks against him and make him drain threes off the bounce. What you don't want is Holiday getting downhill consistently and finishing, making kick-outs, or drawing fouls himself.

Check out Nekias' breakdown of how the Bucks should defend the Hawks.