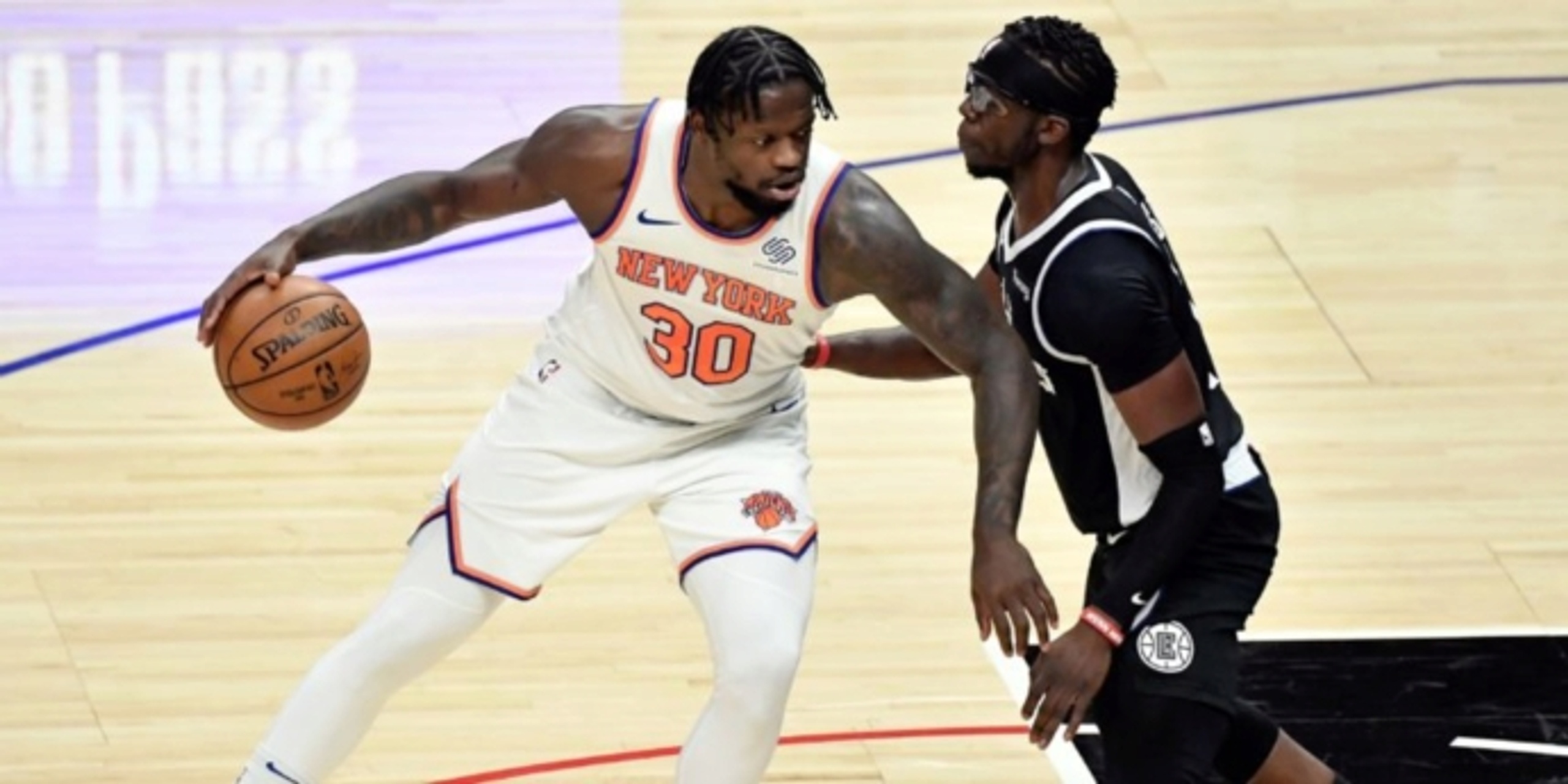 Previously, I handed out grades for the New York Knicks' guards and wings based on their performance this past season. In this final installment of the Knicks' 2020-21 report card, let's focus on the forwards and centers.

Although his struggles against the Atlanta Hawks in the first round may have left a sour taste, it's important to remember that the Knicks would not have earned the fourth seed in the Eastern Conference and secured home-court advantage in the postseason if it wasn't for Randle's awe-inspiring play during the regular season.

Randle, named the NBA's Most Improved Player for the 2020-21 season, averaged 24.1 points, 10.2 rebounds and 6.0 assists per game, ranking in the top-20 in all three categories. He also led the NBA in minutes. (The only other players to average at least 24 points, 10 rebounds and 6.0 assists over an entire season are Wilt Chamberlain, Nikola Jokić, Oscar Robertson, Larry Bird and Russell Westbrook.)

Randle also averaged 2.3 made three-pointers and 0.9 steals while shooting 45.6% from the floor, 41.1% from downtown and 81.1% from the free-throw line. He became just the second player in NBA history to average at least 20/10/6 as well as two made treys per game, joining Westbrook, who matched those numbers during his 2016-17 MVP campaign.

According to Basketball-Reference, Randle is also just the second player ever to average more than 10 rebounds and five assists while shooting over 40% from three-point territory and over 80% from the charity stripe. The only other player in this exclusive club is Bird, who posted those numbers in 1984-85 on his way to winning the MVP.

New York's performance on the defensive end was a critical factor in their success this past season. (The 2020-21 Knicks became just the second team in NBA history to lead the league in opponents’ points per game, opponents’ field-goal percentage and opponents’ three-point percentage.) And Noel was a crucial contributor to the team's surprisingly stout defense.

New York signed Noel to a one-year, $5 million deal last summer, and it turned out to be one of the team's best-value contracts. With Mitchell Robinson sidelined by a pair of significant injuries and available for only four of the team's final 44 games, Noel was asked to shoulder more responsibility than he or the team anticipated heading into the season. However, he significantly exceeded expectations.

Noel was the only player in the league to average more than two swats and one swipe this season, finishing the campaign with per-game averages of 2.2 blocks and 1.1 steals. Over the past decade, the only other players to average at least two blocks and a steal over a full season were Anthony Davis, Dwight Howard and Joakim Noah. Noel is the first player in NBA history to post those averages while logging fewer than 25 minutes a night. Considering his contributions to one of the best defensive teams in the NBA, it was surprising that he received only one vote for the All-Defensive Second Team.

Noel also grabbed 6.4 rebounds per game and shot over 61% of the floor. The Knicks could not have asked for much more.

It was assumed that one of the reasons the Knicks selected Toppin with the eighth overall pick in the 2020 draft was because of his NBA-ready game.

Toppin was named the NCAA National Player of the Year in 2020 due to his dominant play at Dayton, where he averaged 20.0 points per game to go along with 7.5 rebounds and 2.2 assists. He shot a scorching 63.3% percent from the field and 39% from behind the arc. Per Basketball-Reference, he was just the sixth underclassman in the last 25 years to average at least 20 points and shoot over 60% from the floor.

Considering he was already 22 years old on draft day, Knicks fans expected Toppin to make an immediate impact. However, the youngster got off to a disappointingly slow start. After shooting 3-for-12 in the season opener, Toppin suffered a right calf injury that sidelined him for the team's next 10 games. After returning to the lineup, he showed flashes of his impressive combination of size and athleticism but never fully found his rhythm. He scored in double-figures just three times over the entire regular season, never topping 12 points.

Yet, it's worth noting that Randle's breakout season undoubtedly impacted how the Knicks deployed Toppin. The rookie logged 24 minutes in the first game of the season, but by the time he returned from his injury, Randle was proving himself indispensable, and coach Tom Thibodeau wanted his All-Star on the floor as often as possible (hence, Randle leading the league in minutes). Thus, Toppin usually only played the first six minutes of the second and fourth quarters, making it challenging for him to contribute consistently.

Toppin finished the season averaging just 4.1 points and 2.2 rebounds, shooting below 50% from the floor and 31% from downtown.

However, Toppin encouragingly closed the season on a high note, providing the Knicks with a much-needed spark in their first-round matchup with the Hawks. He was aggressive throughout the series, scoring eight points in Game 2 and then poured in a season-high 13 points in 18 minutes in Game 4, becoming just the fourth Knick rookie to score more than 12 points in a playoff game over the last 35 years. Game 4 was the first time all year Toppin attempted at least four free throws and multiple three-pointers in the same contest. We'll see if he can build on that momentum heading into 2021-22.

After New York waived Gibson last offseason to clear cap space, they invited him to training camp but decided to keep Omari Spellman on the regular-season roster. However, by early January, Gibson was re-signed and reunited with Thibs. Taj saw only sporadic minutes early on, but became an important rotation player over the second half of the season.

By the time the playoffs arrived, the veteran was shockingly one of the Knicks' most consistent and reliable contributors. Thibodeau inserted Gibson into the starting lineup in Game 3 vs. Atlanta, and he ended up averaging nearly 28 minutes per game in the postseason.

At 36 years of age, Gibson has proven he can still hold his own, especially on the defensive end, due to his high-basketball IQ and veteran savvy. Fully expect New York to bring back Gibson next season, as he is also one of the team's leaders in the locker room. 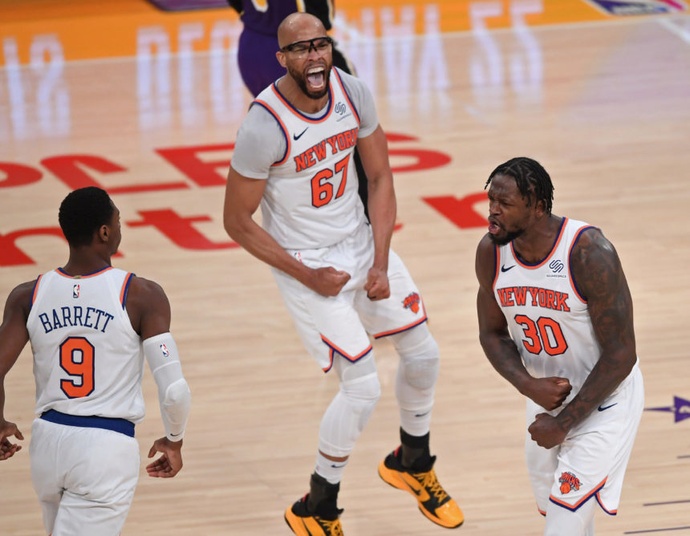 Drafted with the 36th overall pick in the 2018 draft, Robinson emerged as an absolute steal for the Knicks. During his first pro season, he led all rookies in blocks (2.4) and field goal percentage (69.4%) to go along with 7.3 points and 6.4 rebounds in just 20.6 minutes. His 2.4 blocks per game ranked second in the NBA and was the highest average by a rookie since Shaquille O'Neal in the 1992-93 season.

Robinson also led all rookies in PER and Win Shares, besting Deandre Ayton, Luka Doncic and Trae Young, who finished second, third and fifth, respectively. Robinson also ranked first in VORP and Box Plus/Minus, just ahead of Doncic in both categories.

As a sophomore in 2019-20, Robinson made 74.2% of all field goals he attempted, setting the all-time NBA record for the highest single-season field goal percentage ever, passing Wilt Chamberlain. Over his first two years in the league, Robinson had more blocks (280) than missed field goal attempts (177) and turnovers (72) combined.

Thus, Knicks fans had high hopes that he'd establish himself as a star in 2020-21. They would end up bitterly disappointed.

In February, Robinson underwent surgery after breaking his right hand. After returning to action in late March, he lasted just four games before fracturing the fifth metatarsal in his right foot and would remain sidelined the rest of the season.

Yet, not only did Robinson's durability issues cause consternation, but his regression on the court was also distressing.

Yet, Robinson's numbers dropped to 10.8 points, 10.6 rebounds and just 1.9 blocks per-36 in 2020-21. And after vowing to expand his range, Robinson has shown no signs of a mid-range jumper, let alone a three-point stroke. Worse yet, after shooting 60% from the charity stripe as a rookie, he converted an embarrassingly low 49% of his free throws this past season.

New York has a team option to retain Robinson next season at just $1.8 million. Yet, if they exercise that option instead of signing him to a long-term extension this summer, Robinson would become an unrestricted free agent in 2022. It will be fascinating to see how negotiations are handled by both parties this summer.

Like Robinson, Knox's Knicks career got off to a great start. In December of his debut season, Knox was named NBA Rookie of the Month after averaging 17.1 points, 6.0 rebounds and 2.4 made three-pointers in 34.9 minutes a night. On Dec. 9, he joined LeBron James as the second-youngest player in NBA history to record at least 25 points and 15 rebounds in a game.

He finished the season averaging 12.8 points and 4.5 boards, but shot just 37% from the floor. As a sophomore, he was somehow even more inefficient. His scoring average dropped to 6.4 points per game, as he shot below 36% from the field, 33% from downtown and 65% from the free-throw line.

After starting 57 games as a rookie, Knox found himself out of the rotation for much of the 2020-21 campaign. Over the final three months of the season, Knox appeared in just 22 of the team's last 52 contests and averaged fewer than five minutes (mostly checking in during garbage time). Thus, it's probably unfair to give him a failing grade, considering he didn't have a chance to prove himself.

For fans looking for a sliver of optimism, Knox is still just 21 years old and shot a career-high 39.3% from behind the arc (35-for-89) and 80% from the charity stripe this past season. He also was effective camped out in the corner, converting 60.9% of his corner three-point attempts over the first month of the season while he was a regular part of the rotation.

Knox has only one more year of guaranteed money left on his rookie contract, so 2021-22 could be a make-or-break season, despite the fact he'll be just 22 years of age.

Although the 2020-21 season ended on a sour note for the Knicks, there were some positives, and contributions from their frontcourt were among them.

The NBA’s Coach of the Year will now hope that his club takes another step forward in 2021-22.