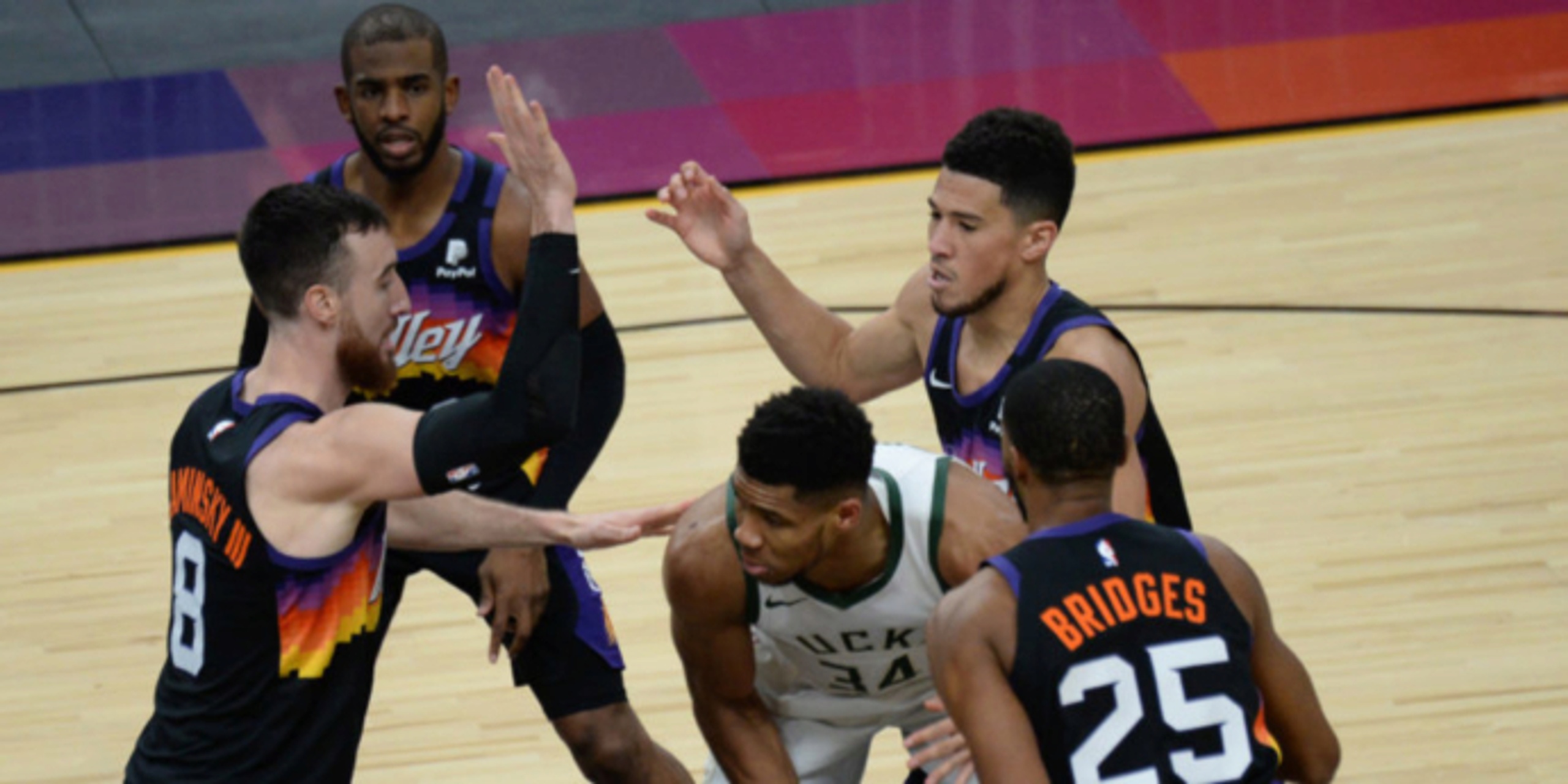 NBA Finals Scouting Report: How the Suns can stop the Bucks

We have a fantastic matchup on our hands, health permitting.

In one corner, the Milwaukee Bucks have finally broken through the glass ceiling. Back-to-back postseason meltdowns led to an epiphany: hey, maybe we should do some things differently.

And so, they did.

A different offensive formation. A departure from their strict drop scheme, opting to sprinkle in more switching as preparation for later rounds. You've seen the fruits of that labor. Their drop suffocated the Miami Heat's offense in round one. Their alterations in drop and willingness to switch were evident against the Brooklyn Nets in round two, and especially against the Atlanta Hawks in the Conference Finals.

The health of Giannis Antetokounmpo looms large, but this is a talented, mentally tough, and diverse (at last!) group ready to bring this thing home.

And then there are the Phoenix Suns, who almost nobody expected to be here.

They barely missed the playoffs last season, partially due to an unfortunate suspension. They went 8-0 in last season's bubble, leading to optimism and ultimately setting the stage for a Chris Paul trade.

They took down the defending champs in round one, with injuries on both sides permeating the series. They destroyed the Denver Nuggets in round two, one pick-and-roll at a time. The Los Angeles Clippers threatened late, but ultimately couldn't push the Suns to a seventh game in the Conference Finals.

The Suns have the goods, y'all.

Let's look at how the Suns will try to stop the Bucks.

Aside from swapping the Bridges/Booker assignments for obvious reasons, this should be pretty straightforward. If/when Giannis is back, that duty will fall to Crowder as it did during the regular season meetings -- as well as last postseason when Crowder was a member of the Miami Heat.

There's room for more cross-matching if necessary. Ayton on Portis or Giannis could be an option to keep him near the paint, particularly if the Bucks use Lopez primarily as a spacer.

Actions to Watch For

This is a favorite of the Bucks to get Giannis a post-up or wing clear-out. They alternate between setting a cross screen on the baseline, and doing so from an angle around the free throw line to get Giannis attacking with some momentum.

Pretty common set throughout the NBA, and one the Bucks will sprinkle in during early offense situations. The setup is simple: one ball-handler, two screeners. One of the screeners will roll to the basket, the other will pop above the break.

No bucket on this one -- the defense does a great job of recovering -- but you can see what the action looks like.

No need to overthink this one. Stick to your guns, and force them to beat you with pull-up jumpers. Ayton is mobile enough to play closer to the level of the screen, so some of the easier mid-range jumpers can be hampered a bit.

The Bucks were an average bunch (14th, via Synergy) against zone during the regular season. They haven't seen it much in the postseason, but the 0.69 PPP clip is worth raising a brow over, at least. For a team that runs pretty hot and cold from deep, it may be worth mixing it in to further throw off their rhythm in the half-court.

Giannis' status may be up in the air right now, but he'll certainly make an appearance in this series. He's arguably the NBA's most feared rim threat, able to finish over, around, and through defenders from a variety of angles.

He's been working on counters all season long. Some of that is quicker decision-making -- the passes on drives are coming a beat earlier than last season, for example. Some of that is adding to the shot repertoire. Post hooks, step-in middies, and turnarounds are all shots he has shown more comfort getting to.

He's been dominant this postseason (28-13-5), and got pretty busy during the regular season series (40-10-4 in two games). Whenever he's back, keeping him away from the rim will be priority number one.

The same principles that apply in transition -- taking away the middle, being active with your hands on the drive -- also apply in half-court situations.

Giannis attempting to add half-court counters to his game is fine. Ultimately, his primary method of attack can be devastating enough to render those counters useless.

It's hard to overstate just how strong this dude is. He has no issue doing his work early, putting a guy on his hip and setting up shop on either block. His backdowns create genuine space. Once he gets to the restricted area, you're pretty much dead. He'll nudge you off-balance with fakes or, if they don't work, simply extend his never-ending arms to get a good look.

The key to hindering Giannis in the half-court is doing your homework early. Building the "wall" is an easy example, particularly when he's isolating above the break. When he isn't at the center of the court, pinching in early will be necessary to making him work. 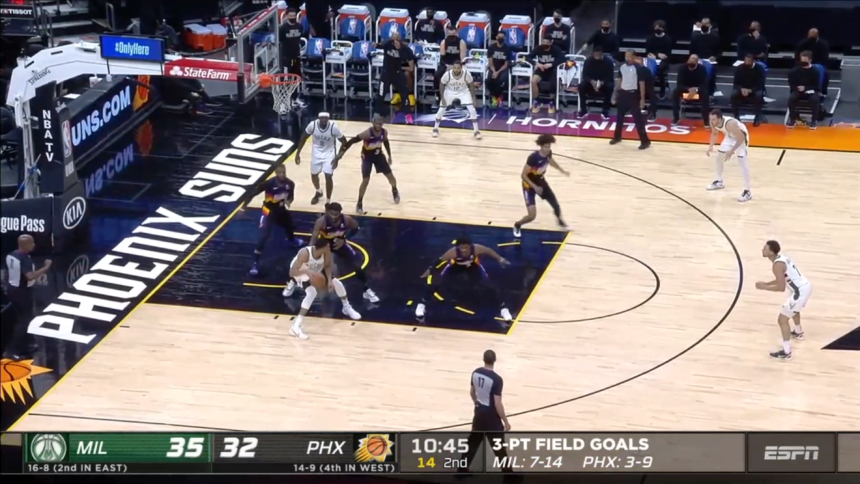 Ayton has the Giannis assignment here. Langston Galloway is helping off of Bryn Forbes to provide some elbow help. Jae Crowder is coming baseline to help, while Chris Paul is tasked with splitting between Bobby Portis and DJ Augustin (no longer with the team). Giannis eventually settles for a failed up-and-under.

As far as actual doubles, timeliness will be key. He's no Nikola Jokic, but he's also a step above Joel Embiid as a passer in terms of ability and willingness.

The Bucks generated nearly 1.3 points per possession when Giannis passed out of a post double this season, per Second Spectrum. Show the hand too early, and he'll make the right play.

If you're able to blindside him a bit, wait for him to begin his move or get into his gather, you may be able to fluster him. Take this rep for example.

Peep the timing of when Paul flies over. He waits until Giannis commits to the gather, then flies in for relief. Cam Johnson does a fantastic job of flashing his hands, causing the turnover.

PJ Tucker: Let him fire above the break, soft close-out in the corners

With Giannis out or at least compromised at the beginning of the series, the creation burden with slide to Middleton and Holiday.

Holiday looms as the more important piece here. Not only will he likely have a size mismatch (Paul is 6'0 on a good day), he becomes the natural heir to the Bucks' rim pressure kingdom.

Holiday can absolutely get busy on the block. In isolation siutations, he has a solid enough handle to get to where he wants to go, and combines that with brute strength and nifty footwork to generate solid looks at the rim.

Keeping him out of the paint will neutralize his impact. It'll take away the easy kickouts, and it'll goad him into taking pull-ups and turnarounds. He got in a bit of trouble against the Hawks last round with some of the And-1 Mixtape possessions he pulled out. Those can add up.