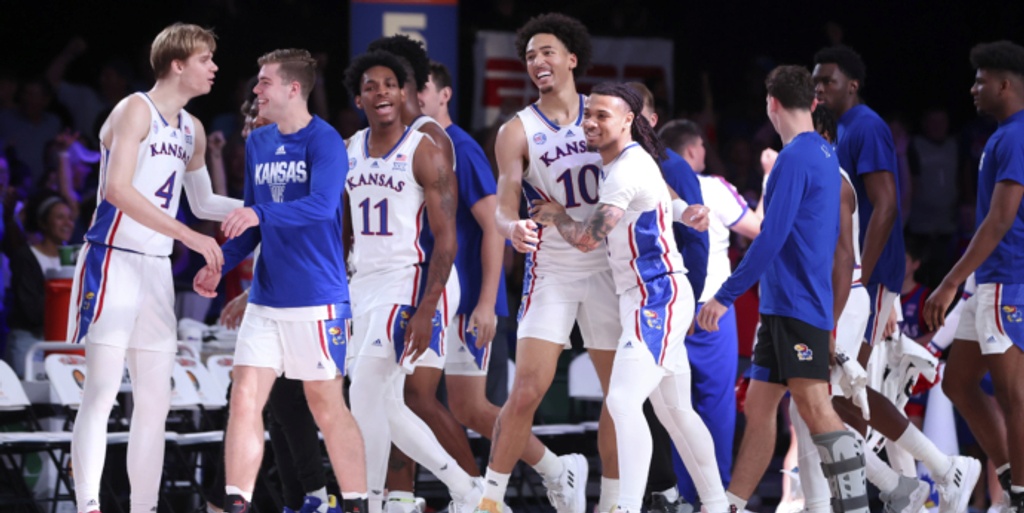 PARADISE ISLAND, Bahamas (AP) — Bobby Pettiford Jr. made a twisting reverse layup off a loose rebound with 0.2 seconds left in overtime to give No. 3 Kansas a 69-68 win over Wisconsin in a Battle 4 Atlantis semifinal on Thursday.

Pettiford’s layup marked his only points of the game, capping a thriller that saw Wisconsin rally from 15 down early in the second half.

Jalen Wilson scored 29 points and had 14 rebounds for the reigning national champion Jayhawks (6-0), and Kevin McCullar Jr. had 18 points and nine rebounds — and a 3 to force overtime.

Tyler Wahl led the Badgers (4-1) with 23 points and 10 rebounds. Most of his points came after half in what was at times a one-man comeback, including a spinning drive against a falling Wilson for a layup and a 68-67 lead with 21 seconds left.

Kansas will take on No. 22 Tennessee in the tournament title game on Friday.

The Tar Heels (5-0) needed a late 14-3 run to finally pull away from one of the tournament’s host schools. Love carried them in the first half with 16 points and reached the 1,000-point mark in his career, becoming the 80th North Carolina player to reach that mark.

Nance picked up the slack after halftime with 20 points and matched his career high in scoring set last season when he was playing for Northwestern.

The Tar Heels will face Iowa State in a semifinal game Friday. Portland will play Villanova in a consolation game.

PORTLAND, Ore. (AP) — Kyle Filipowski had 19 points and 14 rebounds as Duke held off a challenge from Oregon State in the opening game of the Phil Knight Legacy tournament.

Ryan Young added 11 points and 15 rebounds off the bench and was the only other Blue Devils (5-1) player to score in double figures.

The Blue Devils will face Xavier in a PKL semifinal on Friday, while the Beavers will take on Florida.

PORTLAND, Ore. (AP) — Malachi Smith led six players in double figures with a season-high 23 points and No. 6 Gonzaga used a big first half to beat Portland State in the opening round of the Phil Knight Legacy tournament.

Drew Timme scored 18 points and the only shot he missed was a dunk attempt midway through the second half. Rasir Bolton had 14 points and a career-high eight assists, while Julian Strawther, Anton Watson and Hunter Sallis all finished with 10. Gonzaga shot 60% for the game.

Gonzaga will face No. 24 Purdue in the semifinals Friday.

PORTLAND, Ore. (AP) — Freshman Brandon Miller scored 17 of his 24 points in the first half and Alabama pulled away to beat Michigan State in the opening round of the Phil Knight Invitational.

After a rather light schedule for the first couple of weeks, Alabama (5-0) passed its first test of the season against the short-handed Spartans (3-2).

Alabama will face No. 20 UConn in the semifinals Friday. Michigan State will play face Oregon in

Jordan Hawkins scored 18 points, Adama Sanogo added 12 and Joey Calcaterra came off the bench to score 11 for the unbeaten Huskies (6-0).

The first-year forward made 7 of 13 shots and 10 of 12 free throws to go with eight rebounds for the Volunteers (4-1), with four of those free throws coming in overtime.

Santiago Vescovi overcame a rough shooting game to hit the go-ahead 3-pointer with 1:45 left in the extra period, while Zakai Zeigler went 4 for 4 at the line in the final 23.7 seconds left of overtime to seal the win.

Boogie Ellis scored 21 points in his second big output in as many days to lead the Trojans (4-2).

The Vols advanced to Friday’s championship game to face No. 3 Kansas, which edged Wisconsin in overtime.

PORTLAND, Ore. (AP) — Zach Edey had 24 points and 12 rebounds to lead Purdue past West Virginia in the opening round of the Phil Knight Legacy tournament.

Mason Gillis added 14 points for the Boilermakers (4-0), and Brandon Newman came off the bench to score eight points.

Erik Stevenson scored 17 points as the Mountaineers (3-1) lost for the first time this season. Joe Toussaint added 16 points off the bench.

The Boilermakers will face the No. 6 Gonzaga on Friday in the semifinals.