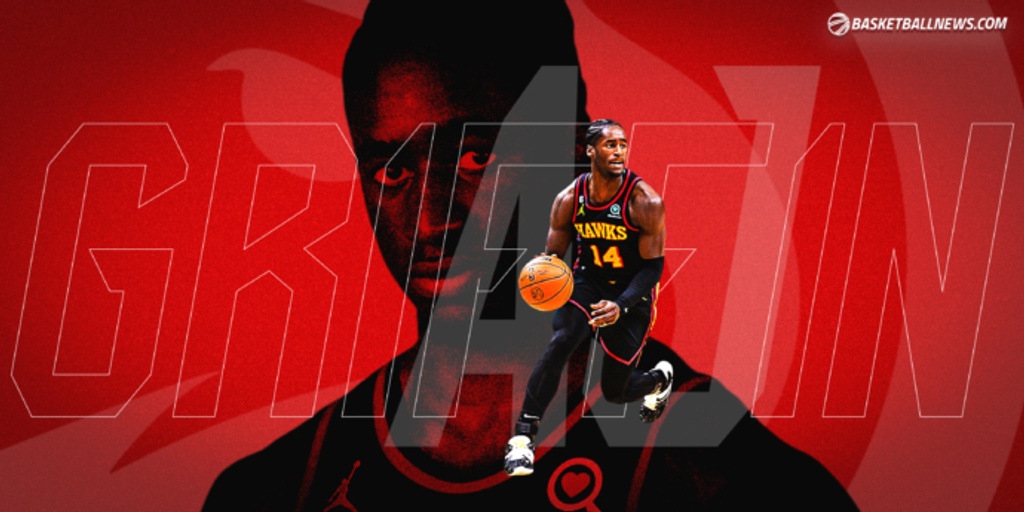 Deep in his bag: Hawks' AJ Griffin took an inch, turned it into a mile

This holiday season should be especially interesting at the Griffin residence.

Just five nights ago, Atlanta Hawks rookie AJ Griffin lept and laid in a game-winning overtime alley-oop from Trae Young to defeat the Toronto Raptors as his father Adrian looked on from the bench.

“It's a blessing to be able to play against each other. I think that's definitely gonna be a night to remember forever, especially 'cause that was the first one against him,” a snickering Griffin told Basketball News and the Atlanta Journal-Constitution on Monday in Cleveland. “You start talking about that on Thanksgiving (laughs).”

After the walk-off victory, Griffin shared an embrace with his father, who told him how proud he was.

“Not even just on the court, but off the court too just being able to share my faith and be able to just continue to be a light. Those moments are priceless and I love him. Gotta get that second one though (laughs),” Griffin said.

AJ Griffin not only hit the game-winner for the @ATLHawks… he did it with his dad, Raptors assistant coach Adrian Griffin, on the opposite sideline. pic.twitter.com/K9fC7pzhEQ

Adrian should be a delighted dad, especially from an athletics perspective.

There’s AJ, who’s starting his NBA career on a high note, but he’s not the only one doing big things. His sister Aubrey is a standout junior for UConn women’s hoops, and just made a huge impact for the No. 10 Huskies in their recent win over NC State.

Their brother Alan finished up a solid basketball career between Illinois and Syracuse, playing professionally for the Newfoundland Growlers in the CEBL last season, and their oldest sister Vanessa was a multi-sport athlete in high school. To top it off, AJ’s mother, Audrey Sterling, was an All-American track star at Seton Hall.

“Really just growing up, I'm always around sports. I think that competitive spirit we have in our family, it just comes so natural,” AJ said of the unique connection.

This year, Griffin’s found a second family in the Hawks.

Speaking to the locker room welcoming him with open arms, the 19-year-old admits he feels like a younger brother to many of his teammates.

Only 18 games into the season, Griffin has already gained the trust of Hawks head coach Nate McMillan. Not even in the rotation just one month ago, the Duke product has looked the part of a legitimate pro almost in an instant.

“You know, he's earning minutes,” McMillan said pregame in Cleveland on Monday. “What we've told all of our young guys and really our guys coming off our bench, ‘You're gonna get short minutes, and you have to take whatever minutes you get — whether it's 5, 10 minutes — then [turn it into] 15, 20 minutes. That's what AJ has done.”

With De'Andre Hunter feeling under the weather, Monday in Cleveland marked Griffin’s first career NBA start. Other than his team falling short on the road, he did not disappoint.

Playing a career-high 35 minutes, second most on the squad, he poured in 17 points on 7-for-11 from the floor and nabbed 3 steals.

“He did a good job. He made some shots out there and was able to make some threes and be productive,” McMillan said after the game. “The challenge was gonna be, for him, on the defensive end of the floor matching up with [Donovan] Mitchell, which is a big challenge. But I thought he played the way he’s been playing — with confidence. He’s gonna make some mistakes, but I thought they were aggressive mistakes. I thought he played okay."

While he had his lumps against the Cavs superstar, according to the NBA’s matchup tracking data, Griffin spent over seven minutes guarding Mitchell and held him to 9 points on 3-for-8 from the field, forcing two turnovers.

Coming into the NBA Draft, Griffin’s reputation with the Blue Devils might’ve seemed that of a catch-shoot prospect. And there is truth to that when you see his 40.0% clip from deep in those scenarios.

However, studying the tape, he’s been finding his way into the middle of the floor a lot too. Exhibiting patience beyond his years, Griffin will put the ball on the deck, oftentimes stopping on a dime, pump-faking and sneaking under his defender with an 8-to-10 foot push shot. He’s gone to that move on the baseline, and he’s also wiggled his way to those kind of looks at the top of the key.

There aren’t many wings with the kind of footwork Griffin already has, and he credits his high school coaches at Archbishop Stepinac, Rodney Swain and Pat Massaroni, for helping him work on that in New York before he left for Durham, North Carolina.

“Just having that time off before going off to college, I've been working on it,” Griffin said. “But just being able to utilize it now and being able to have that space to create and just play my game freely. I feel like it's just coming natural. And I guess you could say it's like deep in my bag where I haven't used it in a while. But like, it felt natural to me. We've been working since high school, really since seventh grade, just footwork, every part of my game really we've been working on.”

Every time I catch AJ Griffin, he seems to be doing good things. Some really nice moments in the first half tonight. pic.twitter.com/7NVtkvxtHi

As his rookie year moves along, Griffin is taking everything in stride.

He’s starting to get the NBA life down pat.

“Really I think just the schedule,” Griffin said of his biggest adjustment. “I think I'm starting to get a feel of it though almost a quarter through the season. You know when you'll have time to rest, you know when you should be in the gym. Just being able to pick up on those tendencies and knowing how to take care of your body. I think at first it was kind of a struggle, but now it's kinda coming along.”

Young has relished watching Griffin’s joyful demeanor, even with his fluctuating playing time.

“I told him at the beginning never get too high, too low,” Young said Monday morning. “He's been doing that. He's just had the same smile every game whether he plays a little bit or he plays a lot. So he's just been a great rook for sure.”

“Just continue getting the work in,” Griffin said when asked how he stays ready. “No matter if I'm playing 10 or 20 minutes, the coaching staff and the training staff, they do well with just maintaining my load for the week and making sure I'm ready for the game and for workouts if I don't play as much.”

The good news for Griffin is that his stock is rising, and when he’s seen more action, he’s delivered.

Despite a shallow sample size, AJ has dropped 58 points with a scorching 69.2% True Shooting percentage in the combined three games he’s played 30 minutes or more. He’s corralled rebounds, ripped away steals, guarded on the perimeter and, maybe most impressively, has taken care of the basketball in the process.

“He's been able to come out and provide some scoring, some shooting for us. Now that he is getting more time, now he's been challenged on the defensive end of the floor guarding that 2, that 3 position, and he's been pretty good,” McMillan said. “So he's playing with a lot of confidence. He has given us a lift in this short season, and he's earned the right to be put out there and given an opportunity.”