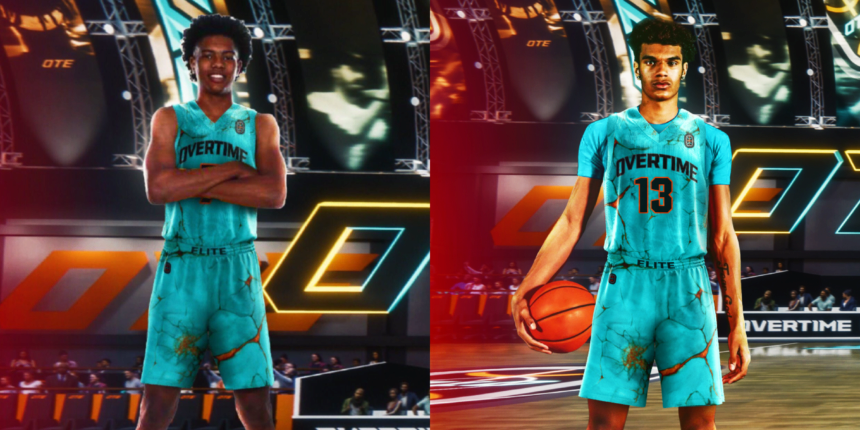 ATLANTA (September 2, 2021) - Overtime Elite (OTE) announced today that highly-rated forward Dominick Barlow has signed with the transformative new league and will be part of its inaugural season this fall.

Dominick Barlow is a 6-9 forward from Dumont, N.J., who played for Dumont High School. He can guard anyone on the floor, is an active rebounder on defense, and can score from multiple positions on offense. Playing with the NY Rens, Barlow had a breakout performance at the Peach Jam this summer and saw his recruitment start to take off.

“Dominick is an exciting prospect that brings an unusual versatility on and off the ball, and on both ends of the court. He’s long, athletic, and brings that New Jersey toughness that’s driven his growth in recent years,” said Brandon Williams, Head of OTE Basketball Operations. “Among amateurs and pros, Dominick has demonstrated an ability to elevate his game, guarding multiple positions, and aggressive playmaking. This is a strong addition to the OTE environment.”

Overtime Elite (OTE) announced today that highly-rated point guard Bryson Warren has signed with the transformative new league and will be part of its inaugural season this fall.

“Bryson shows the foundational tools of an elite lead guard - vision, speed, craftiness, athleticism, shooting and leadership abilities beyond his years," said Brandon Williams, Head of OTE Basketball Operations. “In his cerebral and competitive approach to the game, you can sense his desire to be the best at his position in the country. He’ll get the chance to show and prove that day in and day out at OTE, as he sharpens his game against the best players across 3 classes in the country.”

“It’s hard to imagine a player as developed as Bryson at such a young age. But in addition to his natural talent, the young man puts in the work and leads by example,” said Kevin Ollie, OTE Head Coach and Head of Player Development.  “That’s exactly what you want and need in a point guard - level 5 energy all the time. I can't wait to coach the total person.”

Malik Bowman is a 6-8 forward from Cumberland, Maryland and played at Bishop Walsh High School. Bowman is a highly-ranked prospect with offers from major collegiate basketball programs all over the country. He has a smooth feel, and controlled game with the ability to ball handle and has the size and athleticism to defend up and down a line up. Bowman has a strong frame and can shoot with range while also having a solid mid-range game while guarding 1-4 on the defensive end.

“Malik is an extremely talented and versatile wing who has demonstrated the character, drive and commitment to separate himself on and off the court,” said Brandon Williams, Head of OTE  Basketball Operations. “With his skill level, maturity and understanding, he is going to make an immediate impact in the OTE environment. I am excited to see his continued growth, and his game flourish under Coach Ollie and his staff.”

“Coaches and teammates praise De’Vontes not only for his talent, but his work ethic, and coachability,” said Brandon Williams, Head of OTE  Basketball Operations. “With his competitive spirit, De’Vontes will thrive playing with and against an elite peer group, and it will bring out the best in him.”

Kok Yat is a 6-8 forward, originally from Anchorage, Alaska, who last played for Norcross High School outside of Atlanta. Yat has received significant interest from top-rated college basketball programs. The athletic forward has the ability to handle the basketball and has developed into a reliable outside shooter. Yat’s cousin is JT Thor, who was recently drafted 37th by the Charlotte Hornets.

“Kok will bring a high level shooting skill to the league environment, while adding wing versatility and depth.” said Brandon Williams, Head of OTE Basketball Operations. “As this young man continues to round out and polish his perimeter skill set, he will emerge as a valued prospect for the next level.”