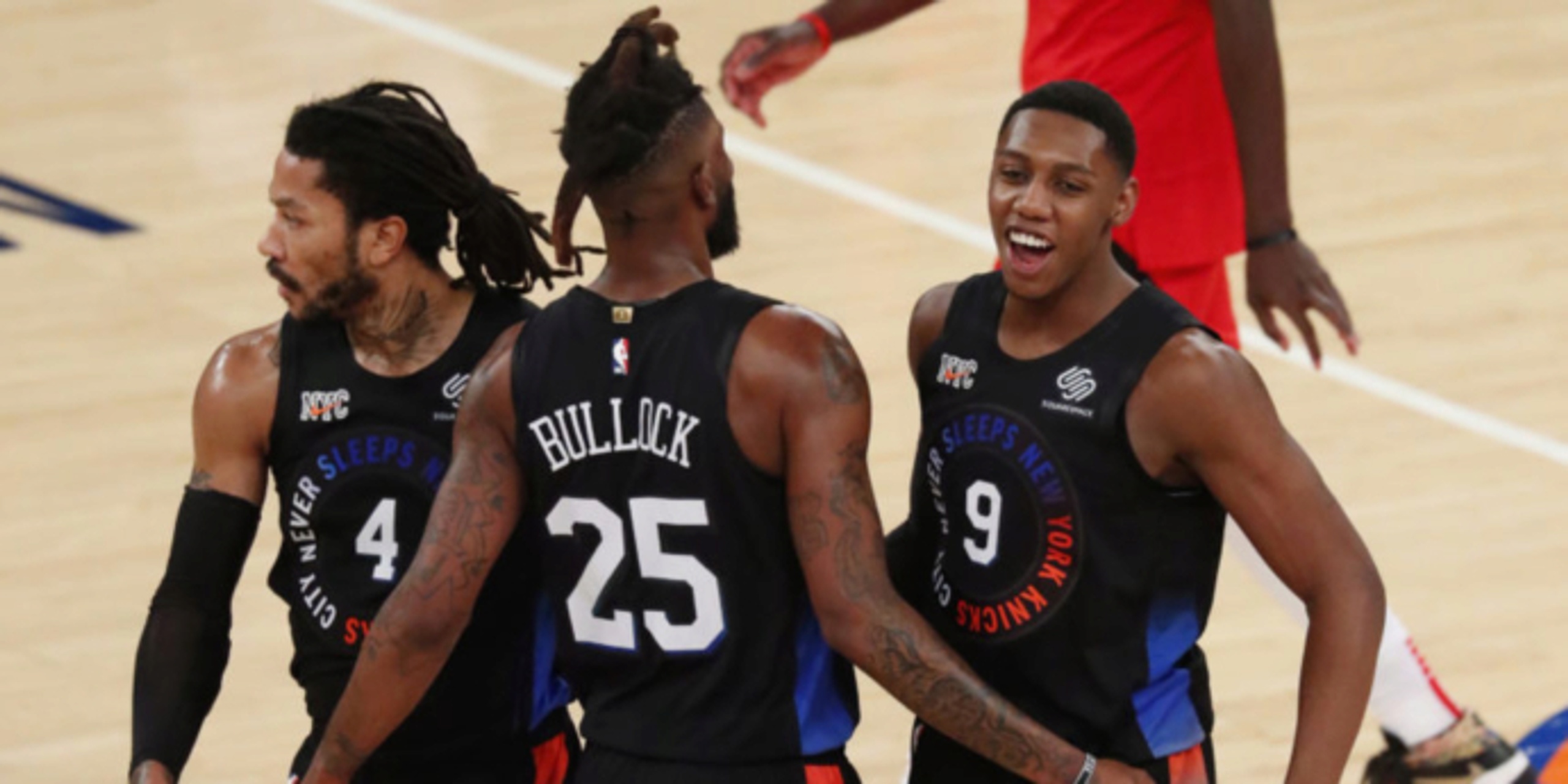 With the New York Knicks' 2020-21 campaign now concluded, we'll have plenty of time to look ahead toward the draft and free agency over the next few weeks and months. However, let's first take a look back on what was an unexpectedly entertaining season.

Before handing out a grade, I'll provide a statistical sketch of each player's production. This first installment will focus on the guards and wings, and then we'll conclude with the forwards and centers in a separate column.

Julius Randle's breakout season was the most significant factor in New York's resurgence in 2020-21, but Barrett's dramatic improvement across the board was also crucial to the Knicks' shockingly successful season, which resulted in them qualifying for the playoffs for the first time in eight years.

Barrett posted relatively solid stats as a rookie in 2019-20 but was remarkably inefficient offensively, shooting just 32% from three-point territory and 61.4% from the free-throw line. He also posted an unimpressive 2.6-to-2.2 assist-to-turnover ratio. Coming into his sophomore season, Knicks fans were hoping for considerable improvements from the youngster, yet he exceeded even the most optimistic of expectations.

First and foremost, the Duke product proved durable, appearing in all 72 contests, finishing second in the NBA in minutes played (trailing only his teammate, Randle). And, after starting the season in a shooting slump, Barrett caught fire in mid-January and remained extremely efficient for the remainder of the year.

Starting on January 15, over the Knicks’ final 60 regular-season games, Barrett knocked down 44.7% of his three-point attempts (114-for-255) and 75.8% of his free throws. There were 173 players in the NBA that attempted at least 150 three-pointers over that four-month span, and only five shot a higher percentage from downtown than Barrett.

It's also important to note that RJ is still just 20 years old. He will be younger than several of the kids selected in the first round of the 2021 NBA draft. Factoring in his age, the numbers Barrett has posted since entering the league place him in exclusive company. Consider this: Barrett is one of only eight players in NBA history to tally more than 2,000 points, 500 rebounds and 300 assists before celebrating his 21st birthday. You've probably heard of the other seven guys on this list: Kobe Bryant, Kevin Garnett, Tracy McGrady, Carmelo Anthony, LeBron James, Luka Doncic, and Kevin Durant.

Barrett finished the 2020-21 season averaging 17.6 points, 5.8 rebounds and 3.0 assists. Per Basketball-Reference, only four other players have matched or exceeded those averages over a full season before turning 21 years old: Magic Johnson, LeBron James, Luka Doncic and Zion Williamson. Among those four, only Doncic made more three-pointers, and none had fewer turnovers (Barrett averaged just 1.9 turnovers per game).

Obviously, certain aspects of his game need improvement, such as finishing at the rim, shooting off the dribble and growing as a defender to name a few. Still, Barrett's all-around production was incredibly encouraging.

Coach Tom Thibodeau placed tremendous trust in Bullock throughout the season, often singing his praises to the media and highlighting the shooting guard's effectiveness on both ends of the floor.

On the season, Bullock averaged 10.9 points, 3.4 rebounds, 1.5 assists and 2.5 made treys, while shooting 44.2% from the floor, 41% from behind the arc and 90.9% from the charity stripe. He joined Carmelo Anthony as just the second player in Knicks franchise history to make more than 160 three-pointers and shoot above 40% from downtown. Bullock was also just one of three qualified players in the NBA this season to shoot better than 40% from deep and 90% from the free-throw line. Stephen Curry and Kyrie Irving were the other two.

Bullock earned $4.2 million in 2020-21, which was a tremendous value considering his contributions. The Knicks finished tied for second in the NBA in three-point percentage this past season, and Bullock was a major reason why. Also, he often guarded the opposing team's best perimeter scorer.

On the flip side of the coin, Bullock's liabilities got exposed in New York's first-round match-up with the Hawks, as Trae Young dominated the Knicks, and Bullock averaged fewer than nine points a night while shooting below 39% from the floor.

For a team that often had trouble scoring, Burks frequently provided an offensive spark off the bench and supplied plenty of big buckets in big moments. He joined John Starks and J.R. Smith as just the third Knick reserve to make more than 100 three-pointers in a single season.

Over a critical stretch in April, he scored 20-plus points in five consecutive contests. In three must-win games to close out the regular season, Burks averaged 20.3 points (on 52.4% shooting), 8.3 rebounds and 4.0 made triples. And then he poured in 27 points in Game 1 vs. Atlanta.

However, Burks was streaky and sometimes ran cold at inopportune times. For instance, over the final four games of the Hawks series, he averaged 10.8 points while shooting 35% from the floor and 26% from behind the arc. Burks will enter free agency this summer, and it will be very interesting to see how much the Knicks are willing to offer to bring him back to New York.

At the trade deadline in February, the Knicks acquired Rose for the bargain-basement price of Dennis Smith Jr. and a future second-round draft pick. Remarkably, Rose ended up being one of New York's most consistent, productive and impactful players over the second half of the season.

Rose also posted the best plus/minus on the team, with New York outscoring their opponents by 204 points in the 937 minutes he logged. Once the playoffs arrived, he somehow took his game to an even higher level. Over the first four games of the Knicks-Hawks first-round series, Rose averaged 22.8 points, 5.0 dimes and 4.3 boards, while shooting over 50% from the floor, 50% from downtown and 100% from the charity stripe.

The Knicks were heavily criticized for drafting Quickley with the 25th overall pick last summer, but IQ and New York had the last laugh. Because he spent the season coming off the bench, 15 rookies logged more minutes than Quickley, but he still finished the season ranked sixth among all first-year players in total points, second in made free throws, fourth in made three-pointers, and 12th in assists. He also did a great job taking care of the basketball, which is rare for a rookie. Quickley committed more than two turnovers in a game just twice all year. And his advanced analytics are even more impressive. According to NBA.com, Quickley led all qualified rookies in Offensive Rating, Defensive Rating, and Net Rating.

Quickley knocked down 1.8 treys a night, the most by a rookie in Knicks franchise history. Per Basketball-Reference, IQ joined Stephen Curry as just the second rookie in NBA history to average more than four three-point attempts per game while shooting above 38% from downtown and above 88% from the charity stripe.

The Knicks found themselves a keeper.

Installed as the team's starting point guard in December, Payton began the 2020-21 campaign on a high note. Over the first 11 games of the year, he was efficient offensively, averaging 14.5 points on 46% shooting while chipping in 4.5 dimes and 4.3 boards.

However, as the season wore on, Payton's shooting numbers sagged, as did his confidence. By mid-April, he was a shell of himself. Over the team's final 15 games, Payton averaged 4.8 points and 2.4 assists while converting less than 35% of his field-goal attempts. Coach Thibodeau, who remained loyal to him all year, finally pulled the plug on Payton in Game 3 of the postseason. He did not see the floor over New York's final three contests. Payton, a pending free agent, is highly unlikely to re-sign with the Knicks this summer.

On the bright side, Ntilikina performed well defensively in spurts and shot a career-high 47.9% from behind the arc this past season. However, he was incredibly inefficient from everywhere else on the court, converting just 19.4% of his two-point attempts and making only 44.4% of his free throws (which was shocking, considering he shot 86.4% from the charity stripe in 2019-20).

It's worth noting that Ntilikina only logged more than 25 minutes in a game once the entire season, so it was difficult for him to develop any sort of rhythm in a limited and unpredictable role. And Thibodeau is the fourth coach he has played for during his four seasons in the league.

Nonetheless, Ntilikina has been unable to prove to any of those four coaches that he deserved consistent minutes. He will be a restricted free agent this summer, which means Ntilikina may have already played his last game in a Knicks uniform.

Check back for part two of this series, where we’ll be grading the forwards and centers.