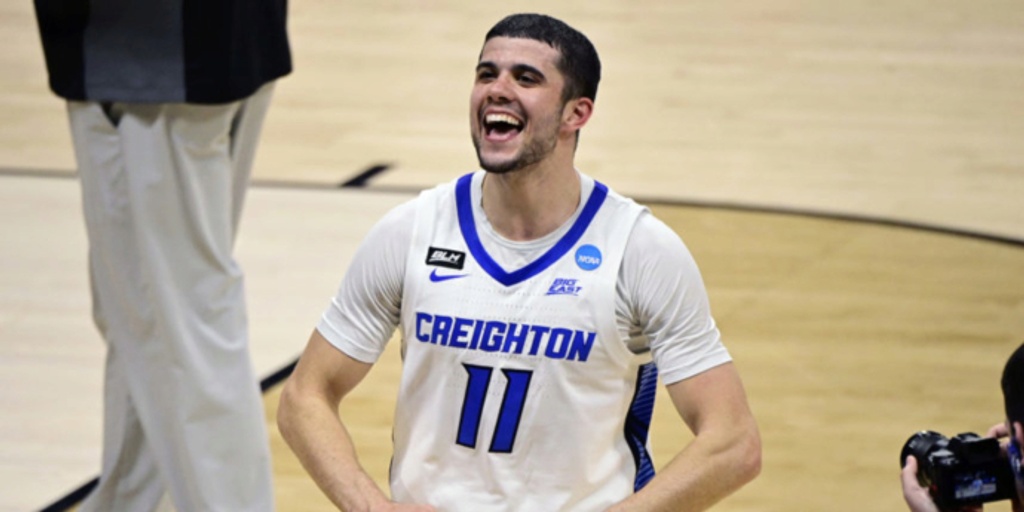 If you search “Marcus Zegarowski” on Google, you will see “Michael Carter-Williams’ brother” in the top results.

Perhaps a fact known among basketball circles, but not likely quite as well-known by the greater public, is that Zegarowksi -- Creighton’s leading scorer this season and a 2020-21 All-Big East First Team member -- is much more than an NBA Draft prospect in the shadow of the 2014 Rookie of the Year. Zegarowski was a steady force and a key leadership piece for a very successful Bluejays team this year, in one of the most competitive and deep conferences in America.

A 6-foot-2 guard, Zegarowski hails from Hamilton, Massachusetts, which is about 40 minutes north of Boston. He comes from a family of basketball players; beyond the aforementioned Carter-Williams, his older sister Masey plays Division I at Bryant University, and his mother Amanda (Mandy) is a former collegiate player, as well as high school head coach.

Maybe the most important person in his career arc is his twin brother Max (a player at Division II Franklin Pierce and formerly Lynn University). The twin brothers played at Hamilton-Wenham High School, and led the Generals to a perfect 25-0 season and a Division IV state title during their freshman year. They then transferred together to Tilton School (NH), a New England powerhouse that was once the home of current NBA players Nerlens Noel, Terance Mann and Georges Niang. In their junior year at Tilton, the brothers led the team to the NEPSAC (New England Preparatory School Athletic Council) Class-AA Finals, but came up short; Marcus was named to the NEPSAC First Team. Heading into their senior year, they took the Rams back to the Class-AA Finals, this time winning 99-92 against St. Andrew’s School (RI), a game in which Marcus dropped 24 points and took home NEPSAC Player of the Year for his efforts.

Upon his graduation, Zegarowski committed to Creighton University. It would be the first time in his life that he didn't play on the same team as his brother. In his freshman season, Marcus earned Big East All-Freshman honors, posting 10.4 points, 3.4 assists and 3.2 rebounds per game, while shooting 42.9% from three-point range. In the 2019-2020 season, Zegarowksi paired with Ty-Shon Alexander (currently on a two-way contract with the Phoenix Suns) for a potent 33 points per game combined, leading the Bluejays to a 13-5 record in the Big East (24-7 overall) and a first place finish. As we all know, the COVID-19 pandemic dashed the team's postseason hopes, as they seemed poised to make a run in the 2020 NCAA Tournament.

With Ty-Shon Alexander moving on to the NBA, Zegarowski stepped into a larger leadership role for Creighton this season. Although his overall statistical profile was nearly identical to his sophomore year, he did cut down his turnovers and produced a two-point improvement on his individual defensive rating. Creighton went into March with a 22-9 record and a No. 5 seed in the NCAA Tournament. Fresh off of averaging 16 points, 4 rebounds and 4 assists per game during the Big East Tournament, Zegarowksi and Creighton faced No. 12 UC Santa Barbara out of the Big West. He rose to the occasion by posting 17 points and 8 assists, and was pivotal down the stretch, scoring or assisting on 7 of Creighton’s 9 points with the Gauchos taking them to the brink.

Zegarowski only got better as the stakes became higher. In the Round of 32 matchup against Ohio University and fellow draft prospect Jason Preston, Zegarowksi scored 20 points while holding Preston to only 4 points on 1-for-10 shooting from the field. Against an undefeated Gonzaga, which was the No. 1 overall seed in the NCAA Tournament field, Zegarowski went for an impressive 19 points.

“I’ve been intrigued by Marcus Zegarowksi since last season," added Matt Babcock, BasketballNews.com's Lead NBA Draft Analyst. "Although he does not have physical tools that blow you away, he’s a player that’s hard not to like as he shoots the ball with range, provides toughness, and is just a good point guard overall."

Since the season ended, rumors have swirled about Zegarowksi’s next move, but on Tuesday, Zegarowski put an end to the speculation over his future by declaring for the NBA Draft and indicating that he won’t be returning to Creighton next season.

"We will take him very seriously as a prospect. He is currently No. 39 on our 2021 NBA Draft Big Board,” Babcock added.

I’m really not sure which jersey Marcus Zegarowksi will don next season, but I’m looking forward to watching him regardless of where he ends up.