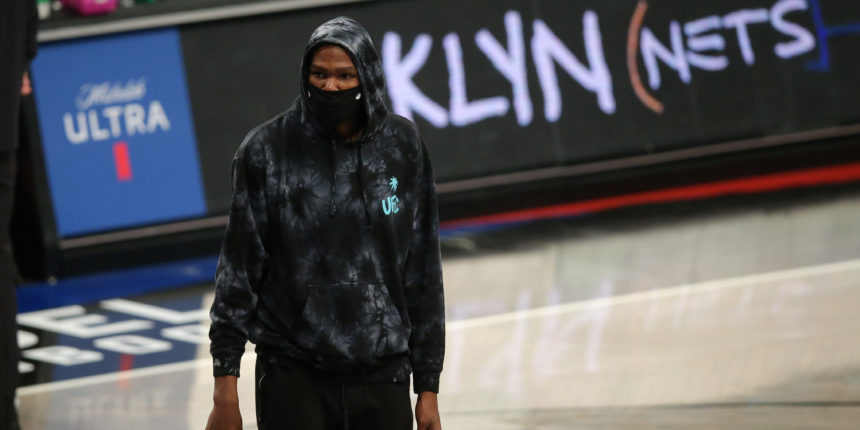 We're all worse off for the Kevin Durant-Shannon Sharpe exchange

Stop me if you've heard this before: there was some drama on Twitter today.

What about this: there was some drama on Twitter involving Kevin Durant today.

That... Also seems a bit common, though I generally find the discourse around his Twitter usage a bit overblown.

At any rate, Durant had a bone to pick with Shannon Sharpe, an NFL Hall-of-Famer and current co-host of FS1's debate show "Undisputed." During one of the show's segments, Sharpe attributed a LeBron-adjacent quote to Durant.

"He [Kevin Durant] said it: 'If LeBron James is the GOAT, I beat the GOAT twice, and hit the shot in his face in his building, what does that make me?'"

You see, the thing about that quote is that Durant never actually said it.

It came from a troll graphic, one that was created precisely because of how gullible people can be. We can quibble about how lame that is on the surface -- I, for one, am annoyed by the fake Woj/Shams/Stein/etc. accounts that pop up during free agency time or the trade deadline -- but they're effective for a reason.

Sharpe didn't respond, a curious decision considering he had no issue quoting others about the topic.

Y’all remember the fake account when KD said: now everybody wanna play for the heat and Lakers? Let’s go back to being competitive and going at these peoples. Then joins 73-9 warriors and builds Nets into a superpower with Kyrie and Harden. OMG😭 https://t.co/SjU18X9XfE

Durant once again pressed him, and Sharpe finally responded.

KD, IF* you wanna talk to me. I’m not hard to find, but I’m not going bck and forth on social media. Whatever our differences are. They can be handled out of the eye of social media. 👍🏾👍🏾 https://t.co/60CGNzMRg9

Then we got this:

KD, enjoy your day. Stay healthy and finish the season off strong. ✌🏾 https://t.co/XT0zIo1urf

And the ordeal ended with Sharpe blocking Durant.

My initial feeling as I watched this go down in real time was that of frustration for Durant. He was placed in a no-win situation: ignore the clip and allow a narrative to grow unfairly, or address it and deal with people calling him sensitive for hounding Sharpe about it. He chose the latter and frankly, I don't blame him one bit.

From there, I just felt anger. Maybe that's a bit much considering I wasn't directly involved, but the whole thing was so darn stupid.

It was avoidable: Sharpe or whoever helps him prepare for the show should've fact-checked the quote before he was able to cite it.

It was unnecessary: once the mistake was called out, a simple "my bad" and correction on the show could've cut this story short. But instead, we got doubling down and a glaring lack of accountability:

I’m not gangsta, but I’m not going bck and forth with KD and lose my job either. I’ve had disagreement with other athletes, ppl b4 , we handled it like adults and moved on... “ADULTS” https://t.co/BYJrCxSpfj

Ultimately, this was yet another indictment on the media landscape and its consumers as a whole.

Troll jobs, like the one that kicked this off, are successful because of us. It's an indictment on our collective laziness; our refusal to fact-check the things we read -- an issue that permeates the rest of society in some pretty obvious ways. Within the context of this incident, it's an indictment on the host and show for not being thorough enough.

And we collectively eat up the drama instead of calling it out for how ridiculous and, at times, harmful it can be. A fake quote about the GOAT conversation isn't the end of the world, obviously, but it's about the principle here.

But at what point do we demand a little better? That doesn't mean a departure from those shows altogether, or from the debate-plus-banter-with-a-sprinkle-of-analysis concept. There's room to have that while also raising the standard a bit. And by standard, I mean "make sure the quote you want to use in your argument doesn't come from a troll page" should probably be the bar.

My worry is that we're long down the path where instances like this are the norm. Funny jabs with no semblance of truth being perpetuated in the name of engagement, with no middle ground in sight. Nobody should want that. I surely don't, and I'm honestly annoyed that I'm even compelled to write about this mess.

Situations like this ultimately poison the discourse. While it's easy to say "ignore it" and stay in your bubble, that absolves the guilty party of real responsibility.

People with major platforms should use them wisely. This was a mild-yet-troubling example of that not being the case. And we're worse off because of it.