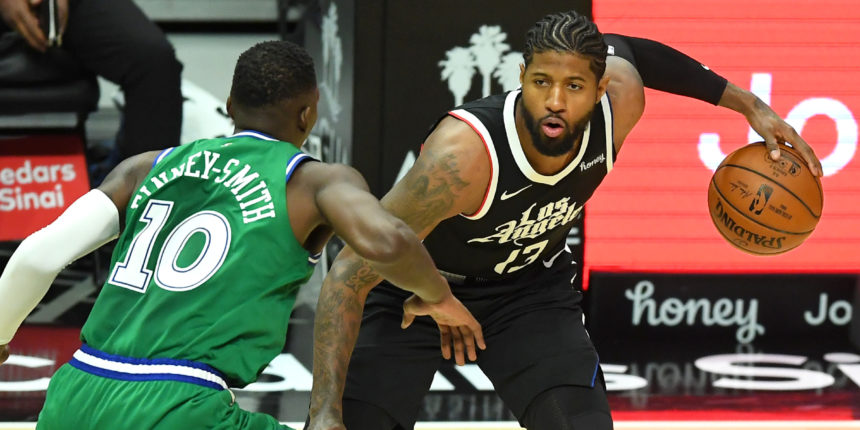 The Cavs, Magic, Pacers, Hawks and Thunder -- these are the NBA’s remaining undefeated teams. And if you predicted that a week ago you were either certifiably crazy or especially prescient.

A weekend that began with Kawhi Leonard bleeding all over the court ended with the Clippers losing to the Mavs by 51, Kevin Durant missing the biggest shot of the game, the Sixers losing by 24 in Cleveland, the Bucks losing by 20 to the lowly Knicks and James Harden still being a member of the Rockets...for now.

The Association brings surprises each and every night, but Sunday was a little bit off the charts. The Clippers were down by 50 for the biggest halftime deficit in NBA history, Carmelo Anthony entered the NBA’s COVID protocol and the Sixers were down one All-Star as Joel Embiid was sidelined with a bad back.

Only five teams remain undefeated, and two of them – the Thunder and the Cavs -- were expected to be among the league’s worst. And if not for Harden’s 44 points in the opener, Trae Young of the Hawks would be the NBA’s leading scorer.

The NBA workweek begins with a bunch of Rockets still sidelined in the COVID protocol for tonight’s game against Denver, Karl-Anthony Towns sidelined with another wrist injury, Steph Curry finally finding his groove and Steve Nash telling his team “we’re going to have a target on our back.”

The ranks of the winless include the Rockets, Nuggets, Grizzlies and Raptors, all of whom were expected to be playoff contenders now that 20 of the 30 teams qualify for the expanded postseason.

But the first week of the season brings surprises, such as a Brooklyn Nets team that looked like 72-0 material losing in Charlotte, when Durant missed a usuallly automatic 10-footer to tie the game just before the buzzer. No surprise matched what happened in Los Angeles, as the Clippers entered the record books for having the largest halftime deficit (50) in NBA history, and Enes Kanter has made 11 of his first 12 shots this season for an unfathomable 91.7 percent field goal percentage.

Normalcy will eventually return sometime in 2021, one would think, but the first six days of the NBA season have altered our preseason perceptions -- like the Clippers being a Jekyll and Hyde act.

"It'’s not that big of a deal, but it’s just one game. We wasn’t ready, we wasn’t prepared, and that’s on me,” said Paul George, who looked like a legit MVP contender after the opening night win over the Lakers. George shot 4-for-13 and was a minus-22, Luke Kennard replaced Kawhi Leonard (mouth laceration) in the starting lineup and was a minus-29 while going 1-for-7 on threes, making everyone scratch their heads over his four-year, $64 million contract extension, and Ivica Zubac was a team-worst minus-33 in his 16 minutes.

But perhaps no loss stung more than the one the Bucks took in New York against the Knicks, falling behind by 14 at halftime and watching Elfrid Payton outplay Jrue Holiday at point guard. Milwaukee missed 31 of 38 3-pointers and allowed the Knicks to shoot 54 percent from the field.

For those keeping track, if we go back to the last three games before the 2019-20 season was suspended because of the pandemic, the Bucks have lost 15 of their last 24 games. They now head to Miami for two games, facing a Heat team that went 2-1 against them last season and 4-1 against them in the playoffs. Coach Bud is a great guy, but two more losses could turn up the heat on his coaching seat by New Year's Eve.

New Year’s Day could also include a clash of the unbeatens if the Cavs and the Pacers keep doing what they are doing, while the Thunder have three straight at home against superior competition...but in 2020, crazy things happen. So Maybe OKC is the league’s only 4-0 team heading into 2021, and Shai Gilgeous-Alexander will be trending on Twitter.

Hey, 2020 has been crazy. What would be crazier than that?