Among this offseason's crop of free agents, some players are flying under the radar. Coming off a torn meniscus, Cleveland Cavaliers combo guard Collin Sexton enters restricted free agency with an uncertain long-term future with the organization.

With Darius Garland’s massive jump last season, alongside the midseason addition of Caris LeVert (who is extension-eligible), does Sexton still fit into Cleveland’s vision? At the moment, Sexton feels slotted into a sixth man role for the Cavaliers or as a secondary piece behind Garland, Evan Mobley and Jarrett Allen.

Throughout his career in Cleveland, Sexton has shown a true knack for scoring the basketball at an efficient clip, averaging 20.0 points, 3.3 assists and 3.0 rebounds per game on 55.0% True Shooting.

On Tuesday afternoon, the Cavaliers extended a qualifying offer to Sexton, which means they can match any offer sheet he receives the open market. However, how many teams will seriously pursue Sexton? After the draft, the landscape looks much clearer for potential destinations outside of Cleveland.

A return to the Cavaliers is certainly possible. But let’s dive into the three best landing spots for Sexton around the league if he doesn't stick around in Northeast Ohio.

It’s no secret at this point that the Wizards covet a point-guard upgrade to pair alongside Bradley Beal. Whether it be Shai Gilgeous-Alexander, Dejounte Murray, Malcolm Brogdon or Tyus Jones, Washington seems to be making calls everywhere at the moment.

Could we be underrating the Wizards as a potential fit for Sexton in the process? Next to Beal, Sexton would consistently see open looks, but his playmaking chops would have to improve to a more consistent level, as Washington needs a smooth operator to run head coach Wes Unseld Jr.’s system.

The offensive fit for Sexton with Beal is super fun, but the defense is also super questionable. However, there’s no denying Sexton would be the best point guard Beal has played with in D.C. since John Wall. And that’s not hyperbole either. The Wizards need to have something click for them in their backcourt, and the clock is now restarting once Beal inks his new lucrative deal.

It's highly unlikely that Sexton would come to D.C. with a mid-level exception offer — regardless of whether it's the $10.3 million non-taxpayer annually or the $6.3 million taxpayer annually — so the team would have to get creative to get him there, likely via a sign-and-trade. We know that Kyle Kuzma and Kentavious Caldwell-Pope could be available, but would that entice Cleveland? How about Deni Avdija or Rui Hachimura, both of whom have flashed upside albeit inconsistently?

Sexton would solve a lot of scoring woes for Washington, but is the price of admission worth it for a team seemingly trying to simultaneously retool and make win-now moves?

A week ago, this option would’ve never seriously been considered. Now, it seems San Antonio is seriously considering a pivot to a full-scale rebuild, which would mean trading away their All-Star point guard Dejounte Murray. The Atlanta Hawks have been consistently rumored as a potential landing spot for Murray, and it makes a lot of sense as I covered earlier this week. 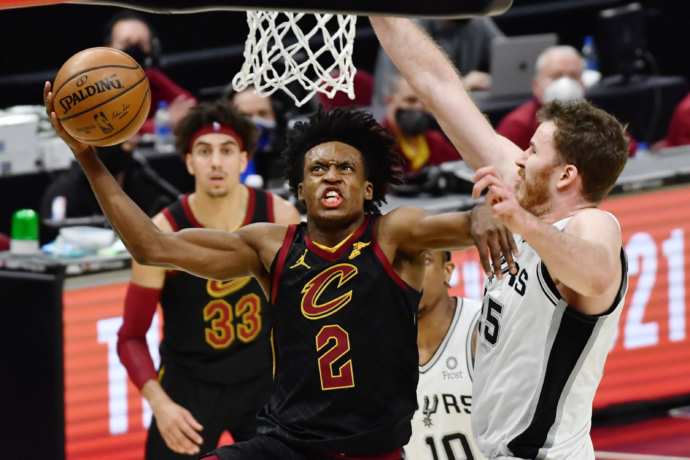 From the perspective of Sexton and the Spurs, it could become a realistic marriage that makes sense for both sides. The Spurs' hole at point guard would be serious, but trading Murray could easily signal their intentions to tank the season for generational prospect Victor Wembanyama. Would Sexton fit the Spurs’ new timeline around their young core? Absolutely. Remember, Sexton is only 23 years old, so he actually makes sense as a long-term piece to their puzzle alongside Keldon Johnson, Devin Vassell, Jeremy Sochan and others.

While the market for Sexton away from Cleveland is thinner than expected, San Antonio truly makes sense as a logical landing spot.

With Dallas now expected to lose Jalen Brunson to the New York Knicks in free agency, could Sexton all of a sudden become a realistic fallback option? If the Mavericks are able to secure a large trade exception in a deal with New York for Brunson, they could become an interesting trade candidate for guards such as Malcolm Brogdon or Sexton. (However, it's looking like the Knicks will be able to sign Brunson outright.)

Alongside Luka Doncic, Sexton would excel in a score-first role. For the Mavericks, Sexton represents a player with upside on the same timeline as Doncic.

The big question becomes: What exactly would the Mavericks be willing to pay for his services if they create that aforementioned traded-player exception? If it’s on a similar tier as Brunson, around $20 million, it actually could be a very plausible reality for Sexton to be a strong backcourt partner with Doncic in Dallas. (If Dallas doesn't get a traded-player exception, they would only have the mid-level exception, so sign-and-trade would be the only realistic route to land Sexton.)

However, thinking out loud, it should be noted that Tim Hardaway Jr. will be returning in basically the same role, and his contract is designed to descend year-by-year — an advantageous structure given that Doncic is starting his rookie max extension next season. (Dorian Finney-Smith also begins his new deal.) Spencer Dinwiddie joined the Mavs' fray at the trade deadline to boot, and proved to be a key contributor in multiple moments after he was acquired as well.

It will be very interesting to see where exactly Sexton lands within the next few weeks. If he ends up staying in Cleveland, will it be beyond the 2022-23 campaign?

These looming questions will soon be answered for Sexton, the No. 9 ranked free agent on BasketballNews, but he’s one of the more interesting names to follow as we close in on the official start of the new league year.